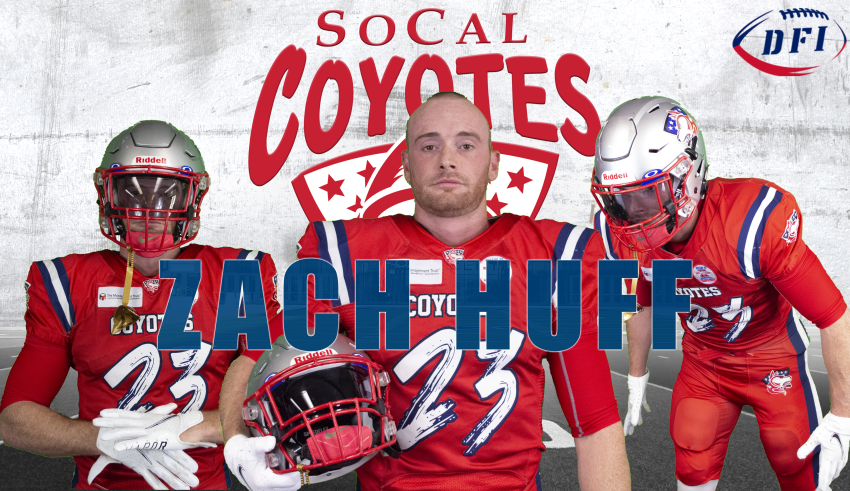 (PALM SPRINGS) — A year ago, Zach Huff appeared ready to make “the leap” SoCal Coyotes head coach J David Miller has come to expect from his players during their second seasons in the Coyotes organization.

One awkward play against Santa Clarita Valley changed everything.

Huff was tracking down a Tigers player last March when his left knee exploded, shredding the linebacker’s ACL in the process.

Up to that point, Huff hadn’t missed a defensive snap in two seasons, looking every bit the every-down, difference-maker the Coyotes had been searching for at linebacker since 2019.

Despite the setback, Huff doesn’t consider 2022 a “lost” season. If anything, the injury helped him grow in ways that playing never could.

“I tore my ACL on a freak play coming down to make a hit I’ve made 1,000 times,” Huff said. “I’ve had 13 seasons under my belt and never thought an injury like this was even possible. I knew instantly it was serious by sound and pain. But thank God I had a great surgical team and amazing support system of teammates, coaches, doctors and family.”

It’s a long process, but Huff plans to be training again in the next 90 days, back on the field for light workouts in another 120, and “100-percent” ready for camp by February 2023.

“It was personally just (about) building character, going through a tough time and being able to watch on the sideline and actually watch the game instead of being inside of it,” Huff said. “Watching it from a different perspective. So I gained a lot of knowledge just watching the game.”

The challenge now that he’s recovering is translating the knowledge to performance. While Huff makes his way back at warp speed — he wants to turn his flashes of brilliance into sustainable, violent consistency.

“I’m excited to put that helmet back on and run onto that field on my own terms,” Huff said. “The greatest part of this game is the opportunity to play and grow as a man. The Coyotes have been there fore for me, on and off the field.”

Huff’s No. 23 was quickly becoming a mainstay during SoCal Coyotes’s 2021 and 2022 seasons. In 2021, Huff recorded 18 tackles with a fumble recovery, and even jumped in on the offensive line at tackle. In 2022, Huff had a great start going into the middle of the season with 10 tackles in three games.

Huff will run out with the starters as usual when the Coyotes open up their 2023 spring season. 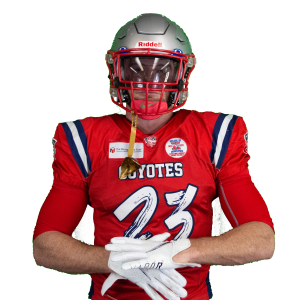 “We expect Zach to emerge out of this as a leader on our Darkside Defense,” said Coach Miller. “Of course, we will be prudent, and patient, in the early going. But Zach’s a game-changer – players with his motor, leadership, and heart are rare.”

GM Scott Alvarez said the Coyote organization “will always have Zach’s best interest at heart” as the team nurtures him back to the field. “Just having Zaxh out there on the field is good is beneficial for everybody,” Alvarez said. “With his work ethic, I think he’s going to shock all of us over the course of the 2023 season.”

The Coyotes felt so strongly about Huff last spring they made the uncharacteristically aggressive decision to limit the number of linebackers they had in camp. The team anticipated him being a fixture on the field – and he was, right until his knee buckled.

“Coach Miller asked me after my surgery, ‘What does down but not out mean to you?’, and I didn’t really have a response for him,” Huff reflected. “After going through everything and just being obedient, I know that now when I hear that, it makes me think of how I feel in any situation in my life. 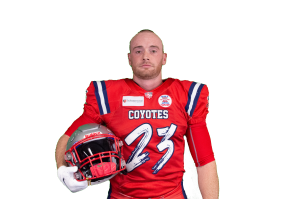 ABOUT THE SOCAL COYOTES
The six-time champion SoCal Coyotes are the 2021 California Non-Profit of the Year, and the national standard of American developmental football. The Coyotes’ organization provides elite athletes a professional environment that refines and showcases their skills through trademarked processes similar to the NBA’s G-league and MLB’s minor-league systems.

Additionally, the Coyotes’ 501c3 and award-winning ‘Above The Line™’ leadership programs impact the social, mental and physical growth of more than 50,000 youth annually through remedial curriculum, training camps, clinics and symposia.