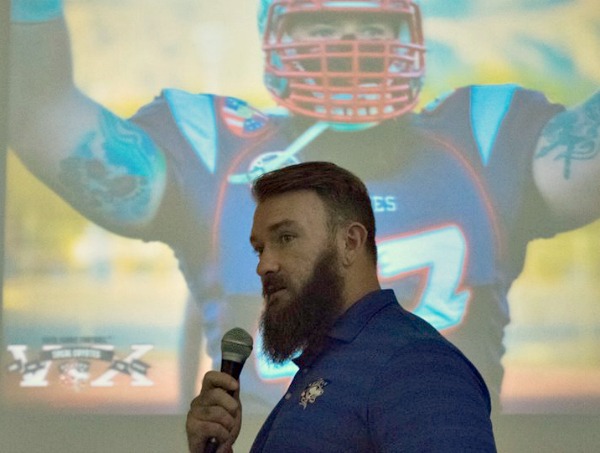 (INDIO) – It’s a Wednesday night, and the SoCal Coyotes all-time sack leader is sitting in church alone, flipping through his Bible, waiting on the service to begin.

He is quiet, and calm, the opposite of the violent maelstrom he is on the field. An unstoppable force with America’s #1 Developmental Pro Football Program™ since 2014, Sheffield has laid out opposing quarterbacks 66 times in his 44 career games – and breaks his own record with every sack. 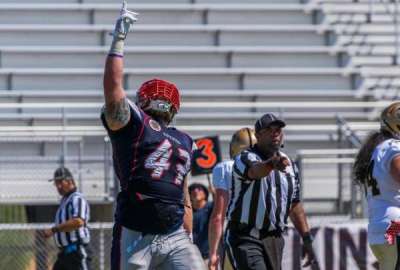 Ferociously ambitious, accomplished and intelligent, the 6-3, 285-pound U.S. Marine veteran and Arizona State product is now in the twilight of his decorated playing career. With three of the Coyotes five championships under his belt, Sheffield believes he has a shot for at least one, maybe two, more titles.

This August, the Coyotes will head to their 11th training camp at Shadow Hills, in preparation for their upcoming season in Developmental Football International (DFI). We asked Sheffield for his thoughts on leadership, love for country, faith in God, commitment to community, and passion for youth in the Coachella Valley.

Q: As a Marine, you fought in two wars. You’re a college graduate. You’re a team captain. What defines a great leader?

A: Achievement alone isn’t leadership. I think you can be excellent at what you do, but it takes a combination of excellence, aptitude, attitude, and sacrifice to be a leader. When all hell breaks loose, nobody cares about your college transcript. People turn to who can lead them through the fire. What you say and do have to match.

Q: What does solitude have to do with leadership?

A: When people hear the word solitude, they probably think of some guy alone in the woods talking to himself (laughs). But the first thing I teach our rookies is to learn to enjoy being alone. I can be alone in a room full of people. You won’t find the answers on Comedy Central or Facebook. You can’t put garbage in your head and expect something different to come out.

Solitude is maturity. Ignore the noise. Control your thoughts. Change the conversation in your head. Mentally control your environment. Think through issues for yourself. Morality, mortality, honor are all choices we have to make. You need mental strength to deal with them. Mentally practice positive outcomes. Solitude is a requirement for leadership, to me. 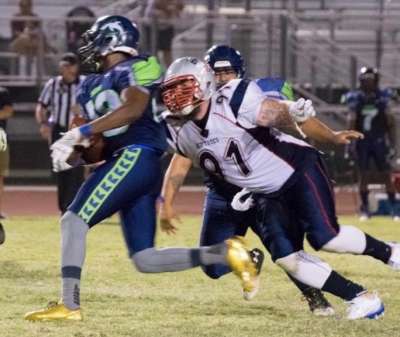 Q: Last season, the ‘Darkside Defense’ under defensive coordinator Mark Ramer didn’t surrender a single point. The Coyotes outscored opponents 349-0. Was the defense that good, or the opposition that bad?

A: We hear that a lot, and to be honest, that’s an insult to us and our opponents. We put a defense on the field with overwhelming talent at all 11 positions.

This defense would have won a championship in any of the indoor leagues – take your pick. Frankly, man for man, we would’ve held our own against any team in the CFL. We were that good. We had some close calls, and we had to make some amazing plays to keep points off the board. Having a scoreless season is something few players can say at any level. We’re extremely proud of it.

Q: Your original goal was to play in the NFL. How difficult has it been to see that dream slip away?

A: I will never regret or apologize for serving my country, which set back my football career. My back-ups at Arizona State all played in the NFL, but I was considered too old. God had a different plan for me, and I accept that. You can waste your life living in the ‘what-ifs’ of the past. I’d rather live in the ‘right-nows’ of where God has called me to serve, which is the Coachella Valley.

Q: During games, we see you talking in your stance a lot. What are you saying to your opponent?

A: (Smiles) I like to ask him if he knows Jesus is coming soon. Right before the ball is snapped, I tell’em, ‘Here comes Jesus, bro.’ I’ve got a big motor, and it goes all 60 minutes. I’m not there for my disposition. I want them to know from the first snap this will probably be the toughest day of their adult life. If you let me in your wheelhouse mentally, it only gets worse. I’m breaking him down, mentally and physically. It takes one play to change the game. Sooner or later, I’m going to force the fumble or get the strip sack that breaks your back and swings the game in our favor.

Q: Is any of that in contrast to your faith?

A: Not at all. Just because I’m an insane competitor doesn’t mean I can’t have deep compassion for others. Jesus was meek, not weak. Football is a sport, not life or death. No man could have survived what Jesus did for us on the cross. Nobody deserves God’s incredible love for us. Sharing God’s grace, and mercy, is what makes life so incredible. He did all this, for us, for free.

A: Well, I’m not religious. Not at all. A relationship with a living God is a big difference. Living for the Lord is a life of total freedom. It’s the exact opposite of being a slave to sin. I don’t wake up stressed about what I did last night. I don’t have to apologize to my son or my mom for where I went, or what I said, or what I did.  There’s two kinds of courage. Physical courage, which is easy to possess, and moral courage, which is the courage to stand up for what is right, and what you believe.

Q: Why is community building so important to you?

A: This is the greatest country in the world. If you love your country, prove it by loving your community. The Coachella Valley is one of the greatest places in the nation. We believe in the vision that God has placed on the heart of Coach Miller and this organization. We have an opportunity and a responsibility to make it even better. We’ve started a movement here. People used to laugh at the Coyotes, and our vision. They laughed at Noah, too, until it started raining.

I believe people will look back on the early days of the SoCal Coyotes and realize we were the pioneers. We put in the time to grow our community. We had the courage to stand up for youth and family values. We are fighting for future opportunities for youth. We had the vision to bring pro sports and sports entertainment to the valley. We’re going to leave this a much, much better place than when we started. 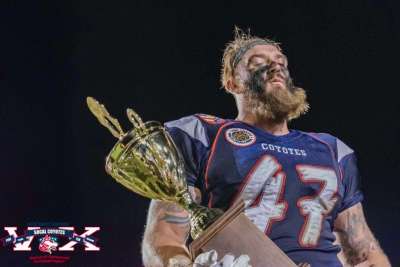 Q: You have logged over 2,000 hours with your Coyote teammates serving the youth of the Coachella Valley, speaking in schools, counseling at-risk youth, teaching free football camps and clinics, and giving leadership symposiums. That’s more than passion. That’s a lot of time.

A: Our youth are the front lines. It’s guerilla warfare. There, in the trenches, you can change society, one life at a time. The best part about working with youth is that you get results immediately. Year after year, we go back to school after school, and we can see the difference in their lives. I tell them, ‘If you don’t like your environment, change it.’ Adults will look at you and laugh. Kids will go out and do it.

We spoke at a high school recently, and one of the kids came up to me and said, ‘Remember me? I was one of the kids you straightened out at Nellie Coffman Middle School five years ago.’ And get this – he just got a football scholarship. Stories like these keep me going.

When you spend time with kids, and tell them you believe in them, it changes their lives. We don’t just need kids who can answer questions, but who know how to ask them. We need youth who not only fulfill goals, but also know how to set them. Leaders don’t just get things done, but know whether they’re worth doing in the first place. It’s a privilege to be part of an organization that makes this an even bigger priority than winning games.