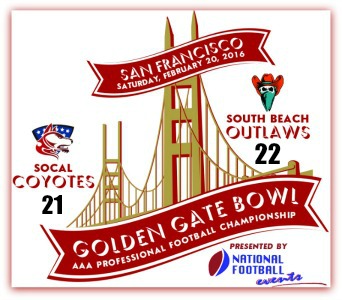 (SAN FRANCISCO) – The four-time champion SoCal Coyotes blew a franchise-record 21-0 post-season lead and six additional scoring opportunities – any of which would’ve put the game away – to lose the National Football Events Golden Gate Bowl by a single point, 22-21, to the South Beach Outlaws.

The elephant in the room was clearly how a team with six players that were hand-selected for NFL, CFL or Arena tryouts in recent and upcoming weeks could lose a pre-season bowl tune-up before the Coyotes start their spring season in the Pac West next week. Head coach J David Miller stepped directly in front of the cannon, and took full responsibility.

“It’s on me,” he said, when asked to explain his team’s red zone interception, three dropped touchdowns, three missed field goals (one blocked) and for surrendering two two-point conversions. “It takes 11 players on every down for a single play to work, and it’s my job to have all 11 prepared. We certainly identified at least four different ways to give a game away. Let’s not be petty. Both teams were here for a reason, and give them credit – they won, regardless how.

“But rest assured we’re not jumping off the Golden Gate Bridge this morning. We’ll look in the mirror, recalibrate, and take care of it in practice this week.”

Miller refused to take the bait of blaming other mitigating circumstances surrounding the game: Two-month layoff since their last game? Referees, of which there were only four? Injuries, which sent five Coyotes to the bench? Five starters missing on defense, and three on offense, including their punter (and holder), facts the Coyotes disguised until kickoff?

“Nobody cares,” Miller said. “Personal problems, personnel problems, injury problems, schedule problems, front-office problems, nobody cares what you’re up against. The sooner we put those issues out of our mind, the sooner we redirect our focus toward the real issue – finding a way to win.”

He said his team found no ‘moral victory’ in the loss. “There are 130 plays a game, and you need four or five to win,” Miller said. “We made three, they made five. They won, we lost. But don’t be ridiculous. Football games alone are not the moral victories that define our young men.

“Moral victories, in the Coyote organization, are learning to love our wives, taking responsibility for and raising our children, being employed and paying our own way in our homes and communities, being obedient to the Lord as we discover the freedom of becoming better fathers, husbands, and men.”

After congratulating the Outlaws, who raucously celebrated their stunning comeback victory over America’s #1 Developmental Football Program, Coach Miller and the Coyotes knelt at midfield and prayed, where they were joined by the Outlaws.

“You have worked extremely hard to be the nation’s premier organization at this level of the sport, and with that must come the accountability and awareness that we are everybody’s Super Bowl,” Miller told his troops, who traveled 1,000 miles round-trip to play the contest. “Real champions must be willing to risk it all, week in, week out, or you’ll never know how far you can go.

“When we are playing deep into December and winning more big games that count, we will no doubt appreciate the experience that only painful nights like this one provide. Be humble, be grateful, and be thankful that you only have to wait a week to get this taste out of your mouth.”

The Coyotes open spring league play in the Pac West at home this Saturday, February 27, against the Los Angeles Spartans (see ‘Events’ on this page). Kickoff is 3 p.m. at Shadow Hills. Proceeds will benefit stricken Indio firefighter Sara Thomas.

THE COYOTES ARE NOW 18-2 in the last calendar year, with both losses coming by a single point. The team is 63-12 lifetime, with six title game appearances, four championships, seven consecutive postseason appearances, and one undefeated season.

THE SOCAL COYOTES are a national, faith, family and football organization dedicated to restoring hope in personal lives, families and communities. With priority on faith, fatherhood and family values, the Coyotes have been recognized for “Building Champions by Building Men.”

Visit www.thesocalcoyotes.com, and learn why the Coyotes were named ‘America’s #1 Developmental Football Program’ by The Football Educator, operated by former Denver Broncos GM and two-time Super Bowl winner Ted Sundquist, by clicking on ‘What We Do.’