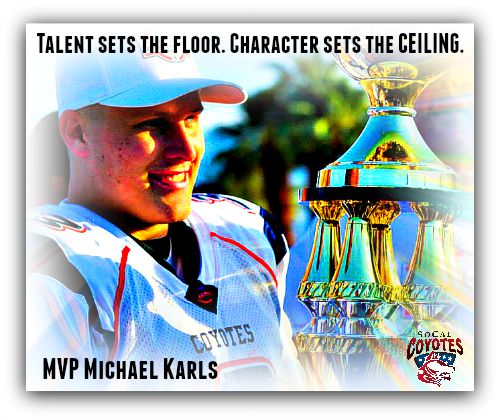 (PALM SPRINGS) – Michael Karls – who quarterbacked the SoCal Coyotes to two championship games, winning one – will miss the remainder of the 2015 amateur fall season with an ankle injury that requires surgery, leaving the team without one of AAA football’s greatest young generals.The 2015 spring Most Valuable Player – and only quarterback to lead the Coyotes to an undefeated season – will be placed on injured reserve, the team said Tuesday night, just days after the ankle failed during Saturday’s upset loss to the San Diego Stallions.

A one-paragraph statement issued by the team confirmed that the MVP will have surgery, snapping a 17-game starting streak that is the second longest for a quarterback in team history. Neither head coach J David Miller nor team surgeon Ben Wehrli, senior partner of Coachella Valley Foot & Ankle, would disclose the specific nature of the injury, but the prognosis points toward a full recovery.

“We feel horrible for Mike,” said Coach Miller. “He has been the face of the franchise. No one has worked harder or done more for this team or this organization or his teammates than Mike Karls. But his health, his future and his pro possibilities take priority over everything else.”

The Coyotes were mum on a replacement for Karls, as news continued to emerge from last Saturday’s shocking 17-16 upset loss – a team the Coyotes handily beat 82-25 last fall. Including Karls, the team lost six players to injury during the game.

“Coach Miller totally agrees that the health of our players is our chief concern,” Dr. Wehrli said. “The Coyotes will uphold the highest medical standards through this process.”

Karls was thrust into the starting role of the Coyotes vaunted Run ‘n’ Shoot offense on August 30, 2014, after incumbent veteran Nate Lewis suffered a shoulder injury, and put up staggering numbers in record time. A 68-percent career passer, Karls went 18-2, with 13 300-yard games. He set club records for touchdowns in a game (10) and touchdowns passing in a game (9), with 59 career touchdowns. His 4,084 career yards are second in club history.

FORMER NATIONAL PLAYER OF THE YEAR Nate Lewis, who started a total of 30 games, holds the Coyote record for consecutive starts with 19. Karls was bearing down on career club records held by Lewis, including total yards (10,027) and touchdowns (98). Lewis was the first Coyote quarterback to sign an Arena Football League contract, when he had a brief stint with the San Jose Sabercats.

BESIDES KARLS AND LEWIS, only two other quarterbacks have taken snaps for the Coyotes. In spring 2013, Mondo Delgado went 2-1 after Lewis went to the AFL, and became the only Coyote quarterback to throw for 200 and rush for 100 yards in a single game. On February 7, 2013, in a 28-13 comeback win over the Las Vegas Cobras, Delgado rushed for 104 yards and threw for 212, with four touchdowns.

In fall 2013 in relief of Lewis, Taylor Genuser completed 63 of 104 attempts for 863 yards and 11 touchdowns. He started two games (1-1), and appeared in every game either in a reserve role or as a holder on field goals and PATs. Genuser parlayed his Coyote experience into a starting job with the Iowa Barnstormers of the Indoor Football League.