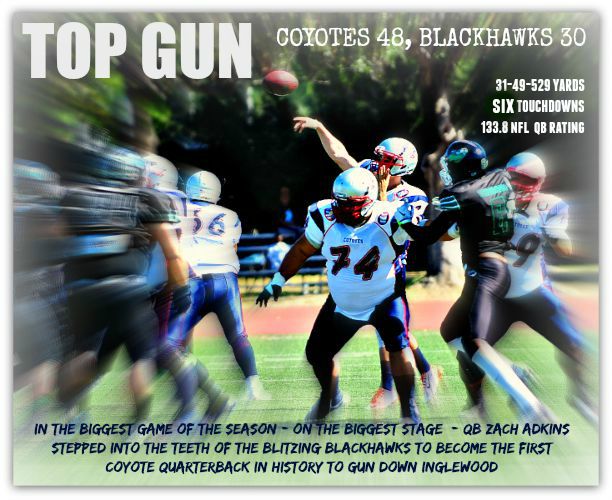 The Blackhawks – the nation’s #1 ranked amateur team – suffered their

THE DARKSIDE DEFENSE: Veteran Utah State linebacker Cade Cowdin led the ‘Darkside Defense’ with 10 tackles and two sacks, followed by rookie Bemidji State linebacker Gary Young, with eight tackles and a sack. College of the Desert veteran Ryan Pervine had five tackles, one sack and one tackle for loss, while Arizona State defensive end Jake Sheffield had four tackles, two tackles for loss and a sack, giving him a team-leading seven on the season. Linebacker Jerimiah Spicer had three tackles, and two tackles for loss.Rookie nose tackle David Williams assisted on two sacks and had three tackles.

THE SILVER STRETCH OFFENSE: Rookie phenom quarterback Zach Adkins – who set 20 single-game, season or career records at Northwestern State (Louisiana) University and is on the ‘watch list’ across the Arena Football League and at least five Canadian Football League clubs – completed 31 passes in 49 attempts for 529 yards, six TDs and no interceptions. Adkins was a 2014 College Sporting News FCS All-Star.

Wide receiver James Calhoun had nine catches for 253 yards and three touchdowns, including a long of 48. Rookie running back Warren Matthews gashed the Blackhawks out of the backfield with seven catches for 135 yards and two scores, with a long of 45.

Matthews also rushed six times for 26 yards.Stevie Will had seven catches for 74 yards, William “Billy” Eichman had three catches for 42 yards, and DeMario Brown had two catches for 25 yards and a score.

Dan Kelly kicked field goals from 30 and 25 and was perfect on extra points to round out the scoring.

The Coyotes had no turnovers and gave up no sacks on the day.

COWDIN’S 10 TACKLES were second in Darkside history. Former Coyote linebacker Devin Jones had 16 on August 24, 2013, against the South Bay Spartans.

ADKINS’ 529 YARDS THROUGH THE AIR also was good for second-best in Coyote team history. On May 5, 2012, Nate Lewis – the Coyotes all-time leading passer – went 26-34 for 574 yards and six TDs against the Las Vegas Cobras at UNLV.