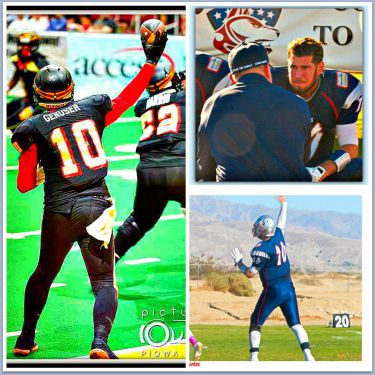 (DES MOINES) – SoCal quarterback alum Taylor Genuser credits his time spent in the Coyotes’ top-ranked developmental program — and learning its high-octane Run ‘n’ Shoot offense – with his recent success in the Indoor Football League, where he threw for 19 touchdowns in his last six games.

“The Coyotes gave me an opportunity to extend my football career after suffering an injury in college,” says Genuser, pictured above left with the Barnstormers behind protection from starting offensive lineman Will Harris – also another former SoCal Coyote.

“Coach Miller taught me the Run ‘n’ Shoot system, one of the most dynamic in all of football, and I truly believe that helped me make the transition to arena football.”

The Run ‘n’ Shoot, says Genuser, “taught me to make quick reads, get the ball out of my hands fast.”

The 6-1, 215-pound signal-caller, who played collegiately at New Mexico Highlands closely follows the Coyote program, and coaches high school football in the fall. He is also a member and group leader with Fellowship of Christian Athletes.

“I was with the Coyotes in 2013, and it’s amazing how they’ve grown,” says Genuser. “Around the country, there is nothing but respect for the entire Coyote program, its coaches, players and management. I will always be a Coyote at heart.”