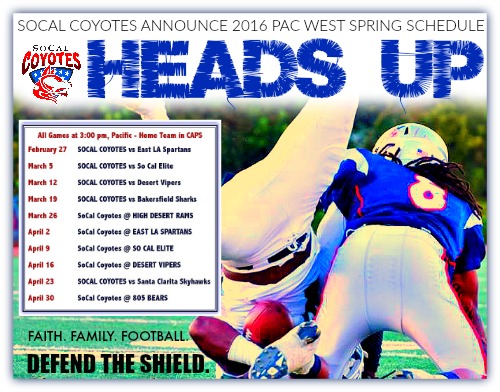 (SHADOW HILLS) – Get ready for more championship football from the SoCal Coyotes, ranked number-one in the Western Region by Chicago-based National Football Events. 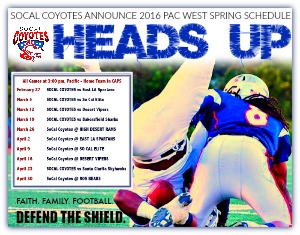 , commencing February 27 at home against the Los Angeles Spartans.

The Coyotes full slate of spring games is posted  on the schedule tab of www.thesocalcoyotes.com.

The next week, March 5, the Coyotes host the current Pac West champion SoCal Elite at Shadow Hills. The Elite are undefeated in three spring seasons, 36 consecutive games, with three consecutive championships, after taking a Pac West title vacated by – are you ready for this – the SoCal Coyotes. The last time the Elite lost, it was to the Coyotes.

The two teams have a foreboding history that promises fireworks on March 5. On December 8, 2012, the Coyotes, then reigning Pac West champions, destroyed the expansion Elite 56-8 in the Catalina Classic.  It was the first professional football game in the history of the tiny Pacific island, which sits 27 miles off the coast of Los Angeles. The Coyotes then vacated the Pac West, where the Elite have since won three titles.

It will be the first time in history a defending LCFL champion saddled back up for the spring to address the Pac West contenders. Since the Coyotes won the Pac West during their inaugural season in 2012, they have played back-to-back, spring-fall schedules in an unprecedented display of sustained excellence. The Coyotes had to beat the Blackhawks three times in 2015 to win the LCFL.

Incredibly, spring 2016 marks the eighth season for the Coyotes, who are 63-11 lifetime, and the most dominant team in Coachella Valley history. With the Pac West announcement, the Coyotes have an opportunity to do the unthinkable – win three championships, in three different leagues, in 12 calendar months.

DO YOU REMEMBER? – When they hosted the Catalina Classic in 2012, the City of Avalon and Catalina Island rolled out the red carpet for the Coyotes, the ‘home’ team in the first pro football game of any kind in the history of the island. The Coyotes enjoyed their first ‘Coyote Walk’ prior to kickoff, walking in uniform through downtown before being transported to Joe Michado Stadium. Coyote passing legend Nate Lewis went 17 for 21 for 331 yards and four touchdowns – in the first half. Google ‘Coyotes Rock Avalon,’ to find detailed newspaper coverage.

IN THREE 2015 MEETINGS with the Blackhawks, the LCFL Champion Coyotes outscored Inglewood, 117-64. In their last six quarters of play, the Coyotes outplayed them 66-14, and are the only team to shut out the Blackhawks in a half. The Coyotes are also the only team to defeat the Blackhawks – for 15 years considered the standard in Southern California – three times in a single season, including an unprecedented two times on the road, in the challenging environment of Jackie Robinson Stadium.