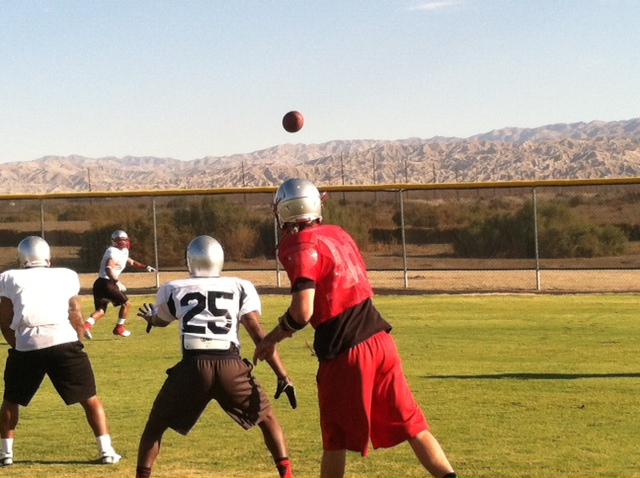 (PALM SPRINGS) — Forget the past, count your blessings, study your playbook and grow up — that was the focus as the Coyotes broke their second week of training camp after a Saturday sunrise practice.

Head coach J. David Miller met with members of the local media Saturday afternoon, but refused to mention names when asked if any single player was having a defining camp. “We all have to get better, or we’re all out of a job,” Miller said.

As the Coyotes head into their first fall season in the vaunted Southern California Football Alliance, “everything in the Coyote organization has improved,” Miller said. “Now is the time that every player must look in the mirror and make sure that includes the guy in the glass.”

The Coyotes defense — after two weeks — is ahead of the offense, with blitz and coverage installs halfway complete.

Offensively, the team is still ironing out wrinkles in their protections and polishing deep seam routes that define the dagger of the Run ‘n’ Shoot — isolating a safety, whose single mistake could result in a touchdown.

One reporter asked Miller to explain the team’s post-practice grease-board skull session on the seam route, which was led by assistant head coach Wayne Anderson Jr.

“You can go back 30 years to the Houston Gamblers, or even last year to the New England Patriots and especially the New Orleans Saints — they all run a deep seam on every snap and block play-side with the S,” said Miller.

“Forcing the (free) safety to make a decision is paramount to what we do here,” said Miller, who will be inducted into the AAA Hall of Fame in January alongside his mentor Darrel “Mouse” Davis, godfather of the Run ‘n’ Shoot and a Coyote consultant.

In two seasons, the Coyotes high-octane Run ‘n’ Shoot offense has accumulated records and points — scoring 60 once, 50 once, 40 six times and 30 four times, but Miller knows this means nothing to the teams in the Southern California Football Alliance, where the nation’s toughest competition is eagerly waiting.

Anderson, back in Palm Springs for a second season, is dialing in the details on both sides of the ball. Offensively, Miller and Anderson are working directly with Mouse Davis himself to fine-tune the Coyotes 2013 attack.

“It’s time for us to grow up,” Miller said. “Every year, the offense has to take another giant step forward, or we’re going backward.

“We can sit around massaging each other’s shoulders, light some incense, sing Kumbuya, and tell each other how great we used to be. Or we can evolve the offense to the next level, just like Hawaii did with Colt Brennan. That’s right where we are.

“It’s time to put away the prom pictures and graduate. If we don’t, plain and simple, we don’t have a chance in the Southern California Football Alliance. Not one of those teams care where we’ve been. Our past success is their motivation to beat us by 100.”

The Coyotes open at home August 24 against the San Diego Spartans at 7 p.m. in their first game as a member of the UFAL Eastern Division of the Southern California Football Alliance (SCFA).

For more information on the SoCal Coyotes, its ground-breaking HOWL Program, or season tickets, email [email protected], or call 760.537.7798, or visit www.thesocalcoyotes.com.