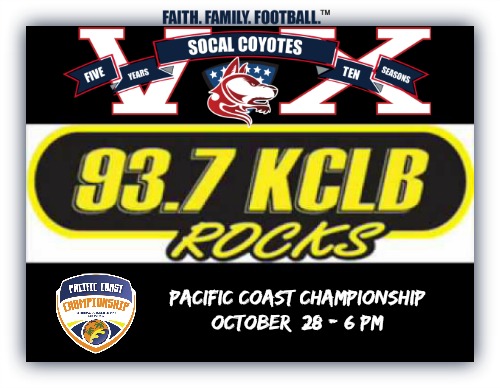 It will be the Coyotes seventh trip in 10 seasons to a title game since their inception in 2012. The Coyotes 26-game win streak dates back three seasons to 2015. This year’s six consecutive shutouts by the ‘Darkside Defense’ are a franchise record.

Slotback Jarrod Harrington – the emergency #3 – started at QB the past two games, and performed admirably, completing 32 of 59 for 402 yards and 6 touchdowns, while rushing for two more. Running back Dylan Peebles set the franchise rushing record last week with 218 yards on 11 carries, a 19.8 yards per carry average, also a franchise record.

A Coyotes win will give America’s #1 Developmental Football Program™ its third undefeated season. In 2016, the Coyotes outscored opponents 406-43. The Coyotes are 79-13 lifetime.

According to Nielsen ratings, 93.7 KCLB FM, a mainstream rock station, is one of the Coachella Valley’s top-ranked stations for men between the ages of 18-49, and the desert’s fourth-highest overall among all demographics. Alpha Media operates eight Coachella Valley radio stations.

The much-anticipated contest will also stream live around the globe at  www.937kclb.com, or through any mobile phone via the free Coyote ‘YAPP.’ Download the Coyote ‘YAPP’ by searching ‘SoCal Coyotes’ on iTunes or Android Market.