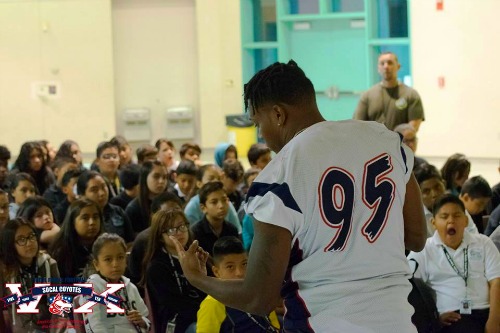 (INDIO) – The performance of any individual is a reflection of a personal culture that you alone create.

Fresh off their fifth championship last weekend, that was the message delivered by the SoCal Coyotes to over 1,500 students at Indio Middle School Thursday.

Students took the Coyotes 50-question ‘Above the Line’ Leadership Quiz, which reinforces the importance of a self-disciplined life – from making your bed when you first wake up, to being ‘the first one to do the right thing.’

Players and coaches used their personal life stories to engage students with the tools it takes to create acceptable behavior, develop momentum, and achieve positive goals.

The Coyotes define ‘Above the Line’ as skillful, intentional, on purpose and driven. Students were urged to purge their lives of destructive, impulsive, ‘uncoachable’ ‘below the line’ attitudes – which include blaming, complaining and excuses.