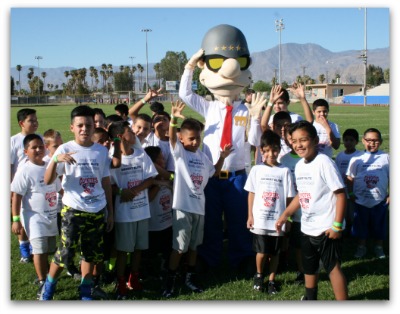 (INDIO) – Over 100 junior All-Americans between ages 6-16 representing the Indio Junior Rajahs and Desert Elite Football teams were the stars today at the First Annual Indio – SoCal Coyotes Youth Mini-Camp at Indio High School, with all proceeds used to support those youth programs.

Sheffield, Cowdin and Caldwell anchor a feared ‘Darkside Defense’ that led the defending champion Coyotes to an 11-1 record and 2015 title. Cowdin and Caldwell are recent Cleveland Browns prospects and owners of Official Strength & Athletics, where they train elite athletes from all over the nation. Sheffield is the Coyotes all-time sack leader (49), and had a club-record 19 sacks and 18 tackles-for-loss in 2015.

“We believe the consistent presence of caring adults in local youth is the solution to changing the direction of entire communities,” said Hall of Fame head coach J David Miller, a three-time coach of the year. “Our desert communities can count on the Coyotes to keep building these positive relationships between youth, peers and adults.”

Former New England Patriots and USC star Oscar Lua, a one-time prep standout at Indio High School, opened the camp by telling the young players “everything started for me, right here, on this very field.”

The four-time champion SoCal Coyotes non-profit sports leadership organization is a conveyor belt of character, competence, and connection, delivering life-changing leadership skills to more than 30,000 Coachella Valley youth each year through an array of programs, camps, clinics and expos.

EVERY MINI-CAMP PLAYER was rewarded with tickets for him and his family to attend the Coyotes home opener at Shadow Hills August 13, against the Central Coast Seminoles of Oxnard. It will be the debut of the most talented rookie class in Coyote franchise history, with five incoming All-Americans from around the country.