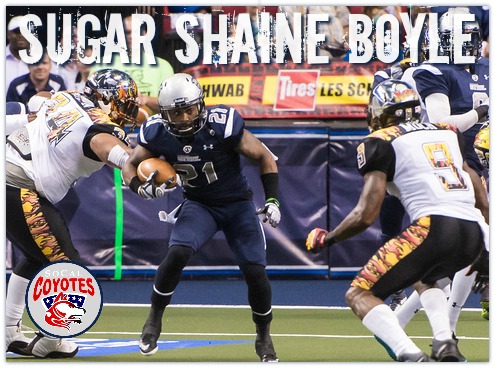 (INDIO) – Electrifying defensive back Shaine Boyle, 5-11, 190 – an Arena Football League star since 2014 with the Portland Steel and L.A. KISS – has re-signed with America’s #1 Developmental Football Program™ to anchor the SoCal Coyotes secondary for the 2017 fall season.

“There are so many great players who have put their blood, sweat and tears into the Coyotes,” Boyle said, after signing last week. “The whole world is discovering our program. We’re sending a message to the NFL, the CFL and the AFL – there’s a lot of greatness out there that’s not on their fields.”

Boyle, who played with the Coyotes from 2013-14, is still the team’s all-time INT leader (15), and his 10 defensive touchdowns in 2013 may never be touched. He turned Coyote game film into currency, catapulting from developmental to professional opportunities.

Also a thrilling kick returner, Boyle nearly reached his dream with the Arizona Cardinals, before showcasing his skills in the Arena Football League. Boyle believes another great Coyote season may be the final push he needs.

“The Coyotes give you that chance to go out, and show out,” he said. “Great practices, great games, great competition – every day is one step closer to my NFL dream.”

The Coyotes open September 2 at Shadow Hills Stadium, against the California Sharks. Kickoff is 7 p.m.

Nicknamed ‘Sugar Shaine,’ the well-respected Boyle is among a host of ‘Dream Team’ veterans returning to their Coyote roots to support the celebrated miracle comeback of NFL quarterback Todd Marinovich.

Boyle and his Coyote teammates play in the Pacific Coast Division of the World Developmental Football League, which has 32 teams in six countries.