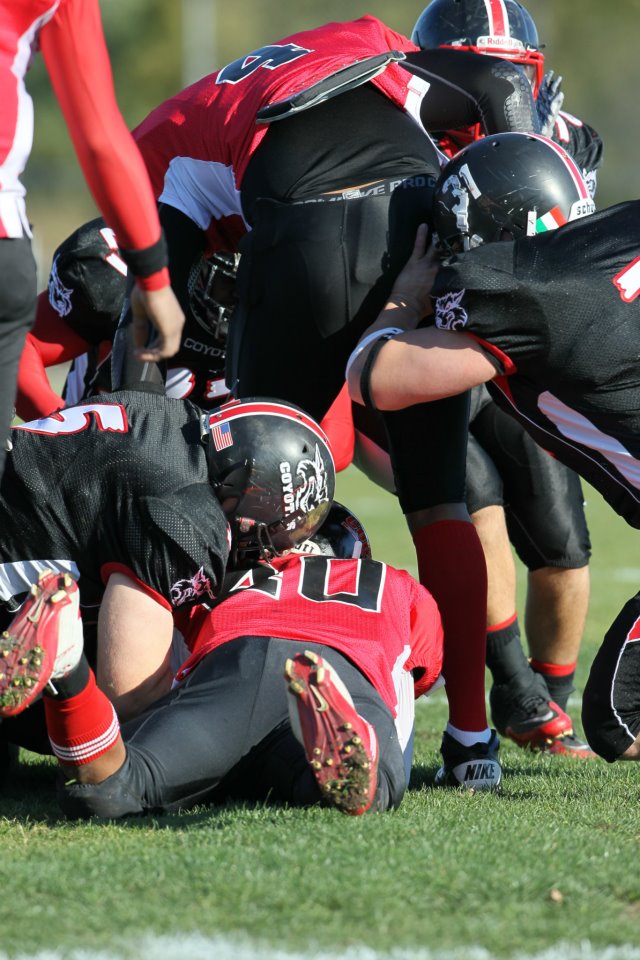 (BERMUDA DUNES) — They bent, but not much. And they sure didn’t break.

Behind a ‘Darkside Defense’ that refused to give up a touchdown for second week in a row, the nationally-ranked SoCal Coyotes improved to 5-1 last Saturday with a 28-13 victory over the Las Vegas Cobras.

Both touchdowns scored by the Cobras were surrendered on offensive turnovers, giving them a 13-12 third-quarter lead and briefly inspiring the visitors. But the furious Coyote defense stiffened, and took over the second half with five consecutive stops.

“Our goals for this game against the Cobras were to do a better job on third down, be more aggressive and create more turnovers to get the ball back to our offense,” said assistant head coach Wayne Anderson, who directs the Coyote “D.”  “Throughout the first half, we were just a step away from creating the turnovers we needed with hard hitting, gang tackling and pass defections that were almost interceptions.”

Late in the second quarter, with the Cobras driving on the Coyotes half-yard line and looking to score, the defense rose to the challenge when defensive lineman Steven Abed punced out a fumble that kept the Cobras out of the end zone.

In the second half, both Michael “Bo” Bovain and Alfredo Melendez had drive-killing interceptions when the Cobras were poised to strike deep in Coyotes territory.  Throughout the game, it was evident the Coyotes took great pride in shutting down fourth-and-long attempts to move the chains.

“I was very pleased with our progress,” Anderson said. “Each week, the players are getting a better understanding in what we are trying to accomplish on the defensive side of the ball. They are also getting more accustomed to playing with each other. You can see the blending between our core of veteran and our new young players.”

“The great thing about coaching these guys,” said the veteran assistant coach, “is that the only thing that matters to the members of the ‘Darkside’ is winning. No one cares who did what or who gets the credit.  Everyone is very important to the success of the defense, no matter how big or small the contribution.

“Everybody on this defense has equal importance, regardless their role.”