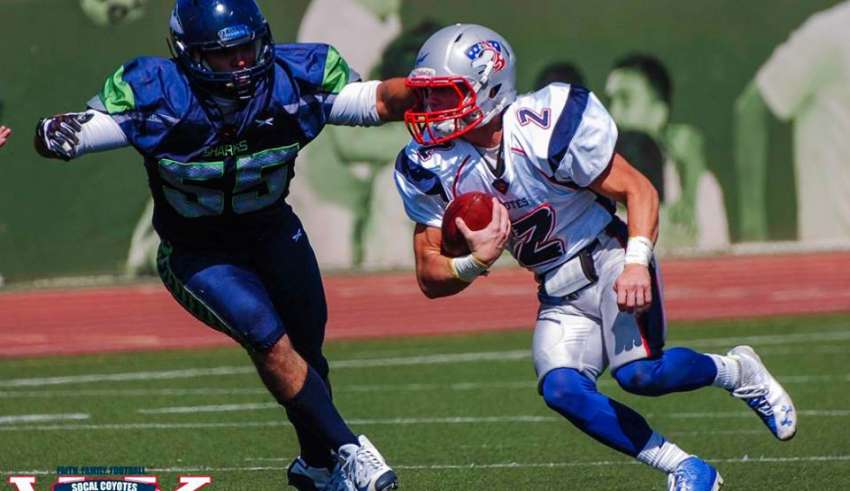 (LOS ANGELES) – The SoCal Coyotes Darkside Defense put up its fourth physical shutout of the season in a 42-0 Pacific Coast Division victory over the vastly improved California Sharks – but the question of the day was who would play quarterback for America’s #1 Developmental Football Program™. 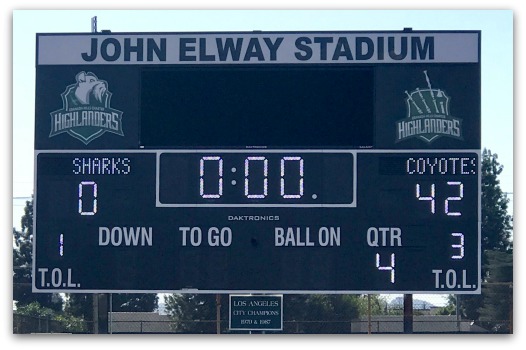 The Coyotes opened the season with pro football’s oldest signal-caller in Todd Marinovich, who has been out since with a sore shoulder. Veteran Michael Karls led the team to back-to-back wins before doctors held him out this week with sore ribs.

Enter the smallest quarterback in Coyote history. Jarrod Harrington, a 5-8, 190-pound CFL slotback prospect who led SoCal in receiving in 2016 and was a final cut earlier this year in Winnipeg, got the nod.

With Doug Flutie-like aplomb, the Kentucky native stepped up at John Elway Stadium in Granada Hills as SoCal’s number-three emergency quarterback, and put some fresh entries in the Coyotes Run ‘n’ Shoot playbook.

S-back Dylan Peebles rushed 16 times for 106 yards and a touchdown. Harrington was 17 for 33 for 192 yards and a pair of touchdowns to Peebles, and rushed for 47 yards and another score. Peebles had five catches for 89 yards.

Defensive back Ridge Turner put the final nails in California’s coffin with an electrifying 47-yard punt return for a touchdown, and a 68-yard interception for another. Linebackers Will Hoglund, Gary Young, Tra’Vez Taylor and Demajiae Reed-Samuel also had interceptions.

“Even out of position, exceptional leaders thrive in the Coyote system and culture,” said head coach J David Miller. “Our captains and leaders engaged hearts and minds and executed with discipline. When that happens, wins follow. At the end of the day, culture eats strategy for lunch.”

“There’s a profound difference between a concept in your head and a belief in your heart,” Coach Miller said. “In a difficult, challenging situation, our entire football team answered today with relentless effort and competitive excellence.”

Harrington last played quarterback during limited collegiate red-zone appearances at Campbellsville University, where he was a two-time All-American (2014-15) and All-Mid-South Conference performer as a receiver and kick returner.

It was the Coyotes fourth consecutive win in the World Developmental Football League, and their 24th consecutive fall victory dating back to 2015.

The SoCal Coyotes are in the midst of a six-game round-robin tournament for bragging rights to the Pacific Coast Division, with the winner squaring off against the East Coast Division winner for the WDFL national championship.