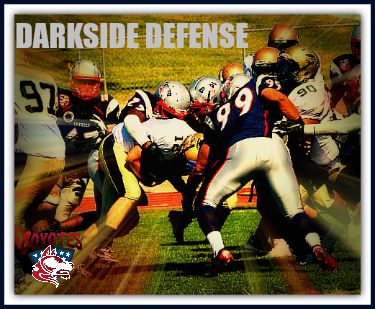 The Coyotes ‘Darkside Defense’ turned back the clock in Palm Springs Stadium, sacking and attacking Arizona Scorpions quarterbacks and running backs for loss 12 times en route to a victory that brought back shades of the 1985 Chicago Bears and an era when men played football on rocky patches of ground and battled with fists and leather helmets.

Arizona came in unbeaten, and proud, with a team stocked with talent. In fact, the Scorpions would take the California Sharks – led by current AFL quarterback Joe Clancy – to the wire just a week later.

But on this day, led by  ‘The Darkside Defense,’ the Coyotes had other plans.

They beat the Scorpions that day 50-3, the worst defeat Arizona would suffer all season. The Coyotes rushed in wild, frenzied waves and knocked out their starting quarterback twice, and held the replacement to six completions in 16 desperate heaves. The Darkside also scored 21 points of its own that afternoon — on top of recovering fumbles, intercepting passes, blocking punts and field goals and stuffing the Arizona running game for a minus 67 yards.

It was the kind of performance Coyotes fans have come to expect – the Darkside Defense has now had four or more sacks in nine straight games dating back to fall 2014.

“When you play the Darkside, you might want to have the golf cart gassed up to come get the wounded,” says barrel-chested defensive end, NFL prospect and team captain Jake Sheffield.”There is so much speed, and so much talent, so many guys flying to the football, that we’re equally concerned about hurting each other.”

The Scorpions, like every other team who plays the Coyotes, simply couldn’t figure out a way to get everyone blocked. Led by assistant head coach and defensive mastermind Shane Helms, the Coyotes may stunt their defensive linemen, or bring  both outside backers, or blitz both safeties or both corners or anything in between.

Bottom line: If you can’t figure it out, your quarterback is in trouble, and the Coyote jerseys just keep coming.

This fall, the Coyotes have a dangerous collection of defensive talent. Sheffield and Javonte Brown are two unblockable speed-rushing ends. Tackle David Williams is straight from the AFL. Linebackers Cade Cowdin, Ryan Pervine, Greg Marshall, Gary Young and Will Hoglund are all NFL camp quality. Strong safety LaRon Wilson is a 6-2 nasty hitter with sideline–to-sideline speed and wingspan. Free safety Anthony Spencer is coming off his best year.

And playmakers Ridge Turner and Jimmy Awolesi are competing to become the team’s best young corner ever – which says a lot, because the last one — Shaine Boyle – is starting right now in the Arena Football League.

It’s a dynamite group, all right, and it makes the Coyotes unbeaten spring season even more ominous for what could happen this fall. In the spring, the Coyotes played this well against teams stocked with NFL, CFL and AFL free agents. The Coyotes do everything with the pressure of a defense turned loose to get to the passer – without regard for things like rush lanes.

“We come into every game with three keys,” says free safety Spencer. “One, kill the running game immediately. Two, kill the tight end, swing game and screen game. Three, get to the quarterback.”

“We’re constant movement,” says Sheffield. “They call an audible, we move. It’s tough to make an adjustment when someone is moving. The whole key, though, is that all of our guys get off the ball so fast. We’re coming to get you, ready or not.”