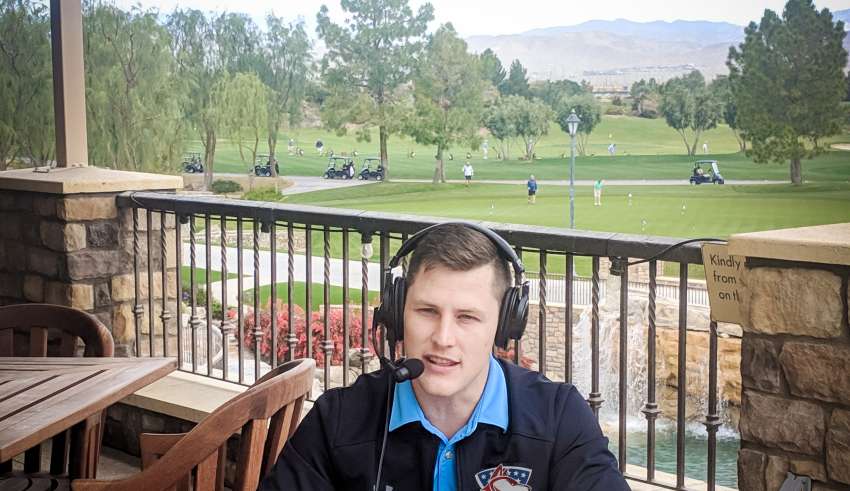 (PALM DESERT) – Quarterback-turned-commentator Michael Karls headlined the first-ever Coachella Sports & Entertainment Stadium Authority broadcast this week at the Classic Club, in a move that signifies the growing relationship between CSESA, the SoCal Coyotes and the H.N and Frances C. Berger Foundation, which owns the prestigious golf course.

Classic Club annually supports over 100 charitable events and is also the new home of the Coyote Classic golf tournament, which is scheduled for May 9. The H.N. and Frances C. Berger Foundation also partners with the SoCal Coyotes in their endeavors to provide educational and social services to desert youth, including the organization’s award-winning ‘Above the Line’ leadership program, which impacts nearly 50,000 youth annually.

“The SoCal Coyotes are making life-changing impacts on our community’s youth,” said Doug Vance, VP Real Estate for the foundation. “We are proud to partner in their worthy efforts.”

Soon the surrounding area is scheduled to be home to The Shield at 1 Coyote Way, a $300-million faith, sports, medical and entertainment campus that includes a 12,000-seat stadium, which is planned for the 125 acres that nestle the Classic Club. CSESA is spearheading the development, with more major announcements coming soon.

In the meantime, Scott Alvarez, VP of Digital Media and Film, has engaged his CSESA staff and media personalities in an intense ‘ground game’ of building relationships in every Coachella Valley corridor, from politics, business, sports, entertainment, education and faith. Via a non-stop flow of digital media, CSESA builds its brands, shape narratives, accumulate thousands of likes, followers, and influence – with a constant over-arching message of faith, hope and redemption.

The six-time champion SoCal Coyotes, as America’s #1 Developmental Pro Football Program™, are equally committed to growing their players off the field as they are winning titles, evidenced by their player-run clinics, camps, symposiums, and scores of job placements throughout the Coachella Valley.

CLAHS is but one of an array of content offerings from CSESA, all of which are part of its “Shield of Dreams” broadcast ministry. Regular hosts include Karls, Conrad and Alex Negron, defensive team captain Jake Sheffield, and occasionally, founder and Hall of Fame head coach J David Miller.

The Coyotes’ investment and belief in Karls and Sheffield are a microcosm of the organization’s “conveyer belt to manhood” philosophy, and a testament to its “Building Champions, Building Men” core competence.

And for those with the talent of Karls, even on-air gigs are now in reach, thanks to CSESA, which is quietly stacking up brands and business as it prepares for the launch of The Shield at 1 Coyote Way.

CSESA now serves as the ‘parent’ company to the non-profit Coyotes, and for-profit Developmental Football International (DFI), and the recently launched First & Ten Financial Services, a fund-raising corporation that financially supports the needs of participating non-profits throughout the Coachella Valley.

ABOUT THE H.N. and FRANCES C. BERGER FOUNDATION

The H.N. and Frances C. Berger Foundation is a private foundation that generously supports educational and other charitable projects. Since 1988, the Berger Foundation has contributed over $800 million to charities throughout Southern California and the United States.