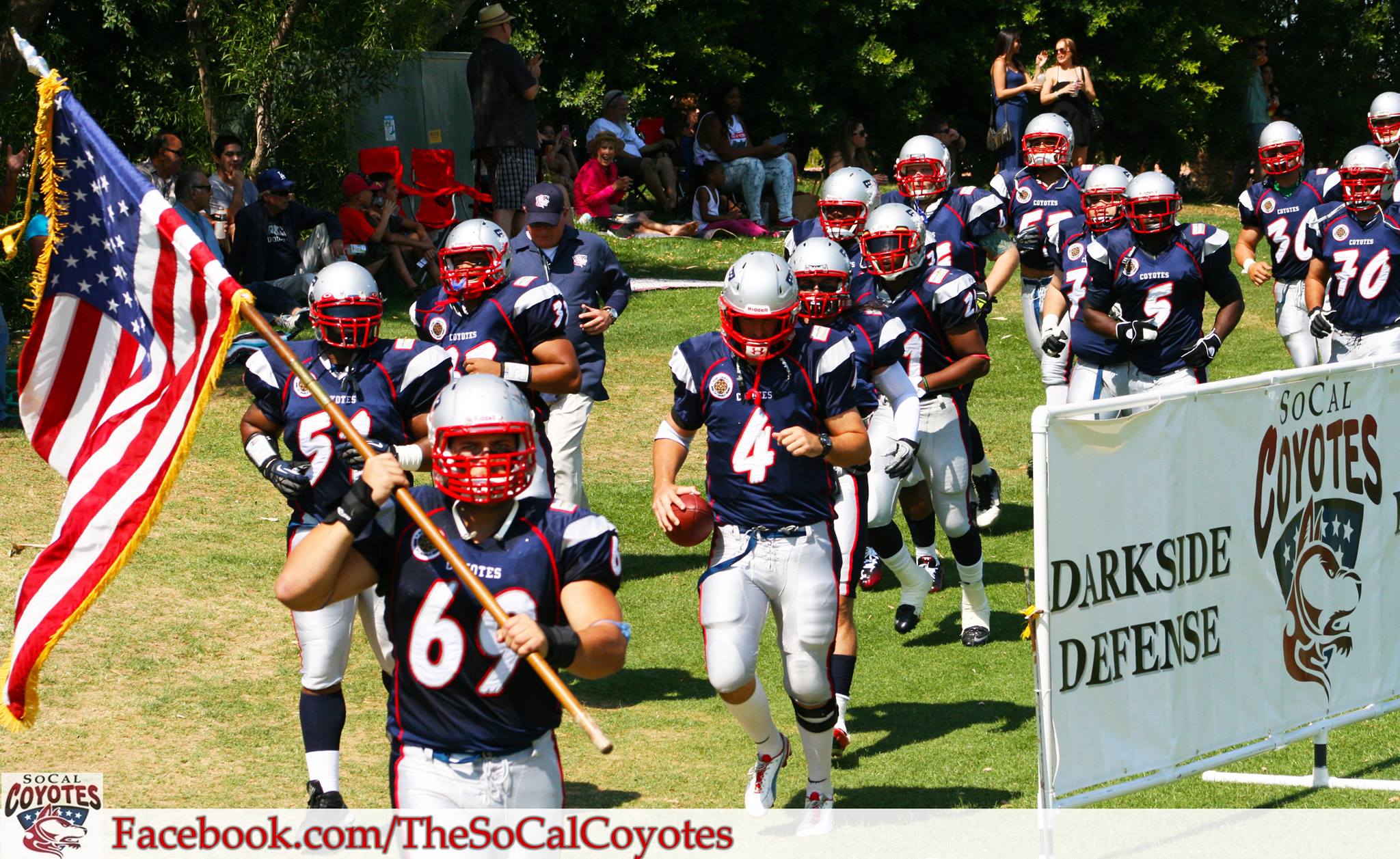 (PALM SPRINGS) — After an injury-riddled offensive line left the SoCal Coyotes Run ‘n’ Shoot impotent, the Darkside Defense — which had dominated most of the game — held on again to beat the Los Angeles Marauders 27-25 in the second West Coast game of the Professional Spring American Football League.

A Coyote Field crowd of 1,383 at the Desert Princess sunbathed in desert temperatures hovering at 100 degrees while the two-time champions jumped to a commanding 27-6 lead.

The most exciting play of the day didn’t come from a vintage Coyote passing touchdown, but when 6-4, 310-pound offensive lineman Andrew “Doobie” Dueber scooped up a fumble recovery and rumbled 35 yards to the end zone for the score.

Shaine Boyle nearly scored on a punt return and the Coyotes quickly capitalized with a six-yard scamper from quarterback Nate Lewis, who also threw a 19-yard touchdown to William Eichmann.

Coyote linebacker Kelvin Cain scored a defensive touchdown in the third quarter when he recovered a Los Angeles fumble in the end zone.

But rampant injuries to wide receivers and the interior line — which forced the Coyotes to use players both ways — put the record-setting Lewis in uncharted waters: How to run out the clock with nearly six minutes to play.

The Marauders, whose starting quarterback Kyle Parrish was unable to return after last week’s punishment, lost newly signed backup Tate Forcier in the third quarter, when he was leveled by linebackers Cade Cowdin and Rafael Lamas on a fourth Coyote sack.

Three late touchdowns by the Marauders gave them life and made it interesting for the fans, but for Coyotes head coach J David Miller, the finish was anything but.

“I’m extremely proud of our defense,” Miller said. “They were on the field all day long, but they played their guts out with heart, discipline and passion.”

The Marauders and Coyotes make up the West Coast division of the fledgling four-team PSAFL, based in St. Petersburg, Florida. The league is designed to showcase top-tier talent and hone their skills against quality competition.

The Coyotes are 2-0 in league play, with two games to play. A championship will be held the weekend of July 4 in St. Petersburg.

Miller promised the Coyotes Run ‘n’ Shoot would be humming again by June 8, when the teams face each other again for Game Three in Los Angeles.

“Fortunately, we have two weeks to re-calibrate the offense,” he said. “And the best part is that we’re 2-0. Offensively, it was an ugly win, but there’s no such thing as a pretty loss. We’re thinking about making the ‘Dooberooski’ a called play.”