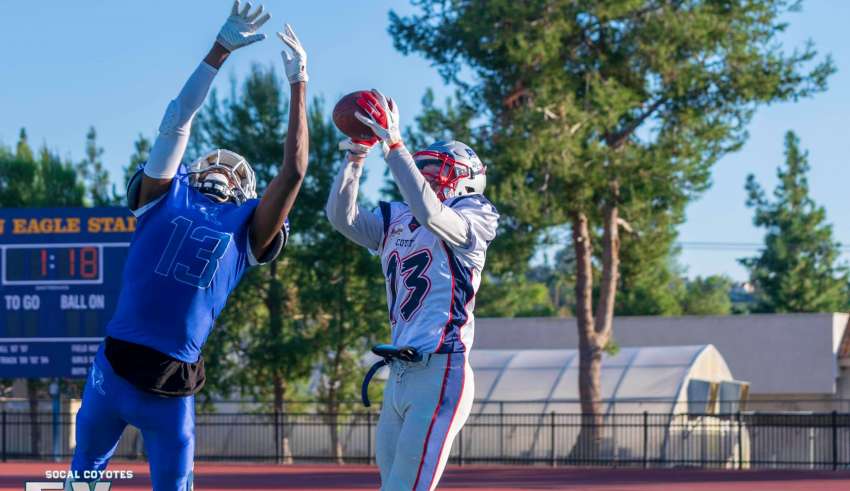 (CATHEDRAL CITY, Ca.) – Under a scorching desert sun, they didn’t see it coming.

“Grow my faith in the Lord.”

The succinct answer from 6-3, 200-pound SoCal Coyotes wide receiver Derek Anderson surprised coaches at Arizona Christian University, who after showing him the campus and facilities, asked what would be the most important thing he could hope to achieve – if awarded a scholarship.

ACU had reached out to Anderson after they had received and reviewed his Coyote game film and junior-college transcript, where he held down a 4.0 GPA. In eight Coyote game appearances, Anderson – working out of the slot – had 31 catches for 468 yards and five touchdowns.

Anderson worked on the inside, opposite of SoCal receiving legend Rashad ‘The Franchise’ Roberts, the Coyotes’ all-time yards, receptions and touchdowns leader. “Rashad’s relentless work ethic, mindset, faith and humility definitely had an impact on me,” says Anderson, whose own confidence and instincts noticeably improved, game by game.

The eye in the sky doesn’t lie – Arizona Christian coaches saw enough to offer a scholarship to the hard-working Anderson, who saw a lifetime goal come true.

“They were blown away that the Coyotes played a 6-3 receiver out of the slot – and that I excelled there,” Anderson says. “They also recognized how much the Coyotes had helped me blossom into the man and football player I am today.

“In the Coyote system, I not only become a better football player, I became a better man,” he adds. “The Coyotes taught me how to work like a pro, and behave like one as well. No blaming, no complaining, no excuses.”

Had it not been for Coyotes’ captain and record-setting quarterback Michael Karls, Anderson’s movie-script story almost never was.

“I STILL CAN’T BELIEVE IT”

Two years ago, a frustrated Anderson had lost his passion for the sport – but was challenged by Karls to give the game, and the Coyotes in particular, a chance. Karls had called an audible with Anderson’s life.

Anderson mustered the courage to meet with Coyotes’ head coach J David Miller. “First meeting, Coach Miller told me, ‘God is in control, stand on the truth, don’t be afraid,’ and to trust the process,” Anderson recalls.

Aside from school, the Coyotes also demanded he work full-time. He spent his ‘free time’ as a volunteer high school assistant coach. Scott Alvarez, Coyotes quality control coach, taught Anderson the nuances of recruiting and the importance of film.

“Coyote game film is your currency,” Alvarez says, underscoring the importance of visual resumes in modern athletics. “He figured it out.”

Anderson leaves an encouraging blueprint for every player who enters the Coyotes’ system, where ‘faith, family, football’ isn’t a bumper sticker, but a lifestyle.

“Derek handled his responsibilities, and got up every single day and worked his tail off,” Coach Miller says. “He took our opportunity, and turned it into HIS opportunity.”

Anderson is expected to report with his teammates for COVID-19 testing on August 10.

“Coach Miller always tells us,  ‘love this game, and it will love you back,'” Anderson grins.

“Looking back at all that’s happened, I still can’t believe it.”