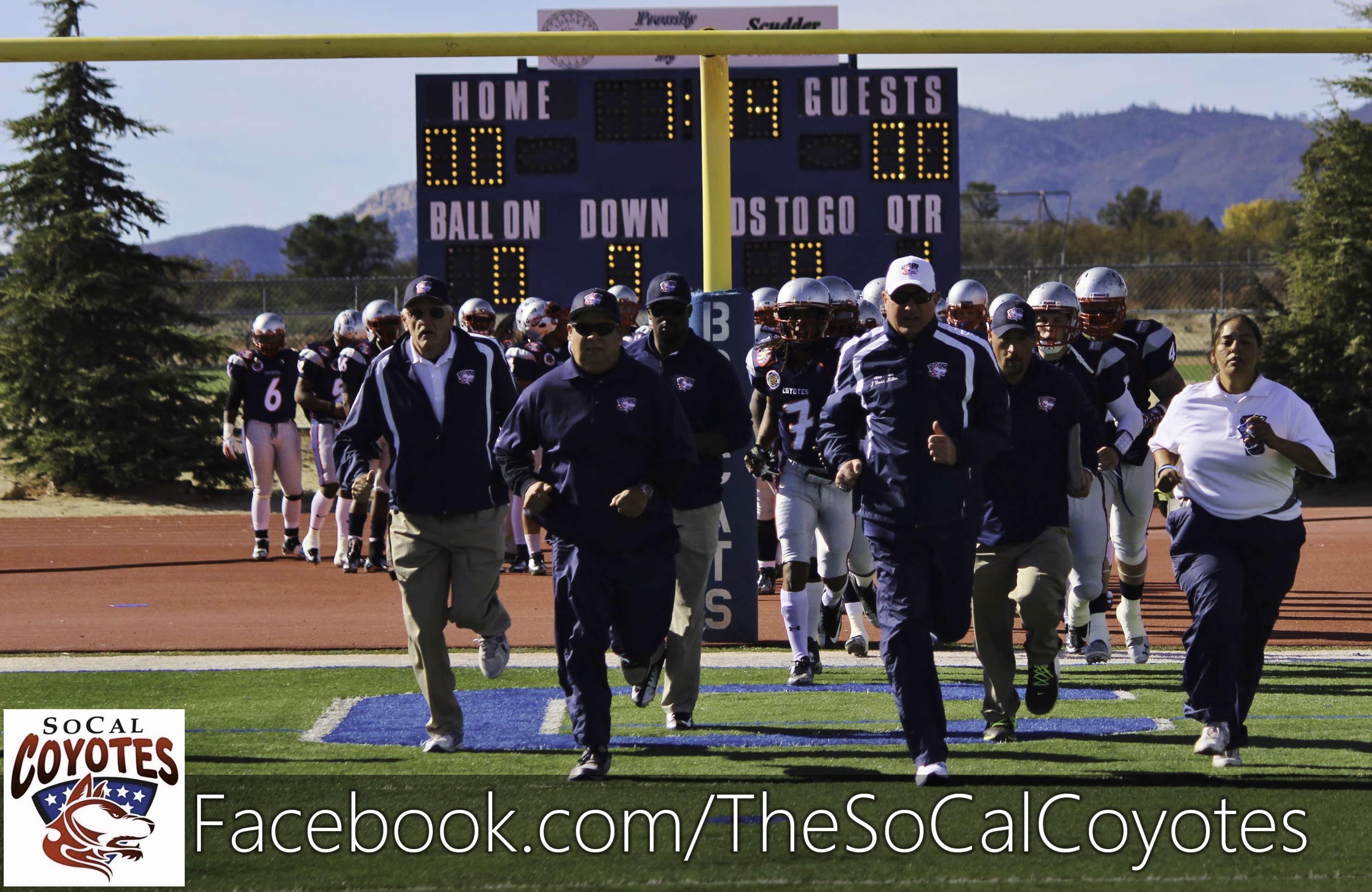 With the win, the Coyotes earned their first-ever berth in the LCFL title game, December 6 in Inglewood. The devastating loss ended the season for the Apaches, whose players earlier in the week made the fatal error of posting upset predictions on social media.

“The definition of insanity is repeating the same behavior and expecting a different result,” said Coyotes head coach J David Miller. “The Apaches didn’t learn a thing from the first time we played them (a 59-20 Coyote victory). Our guys took that personal, and took them to the woodshed.”

Woodshed, indeed. The ‘Darkside Defense’ held the Apaches to minus-40 yards on 30 carries, returned an interception for a touchdown, forced five turnovers, sacked quarterback Les Obie six times, and shut them out completely in the second half.

But the real fun was on offense, where the Coyotes displayed their arsenal of weapons that demonstrated just how explosive and dangerous their quick-strike Silver Stretch Run ‘n’ Shoot offense can be.

Trailing briefly 13-10 in the second quarter, Karls threw two long touchdowns on two successive series on first down to score 14 points in a span of less than two minutes. The first was a 39-yard strike to Stevie “Wonder Dog” Will; the second, a 50-yard rainbow to Rashad “The Franchise” Roberts.

The rapid-fire scores stunned the Apaches, who never recovered. The Coyotes opened the third quarter with another quick score to push the lead to 31-13 on a short toss to James ‘The Human Highlight Film’ Calhoun.

Moments later, cornerback ‘Sugar’ Shaine Boyle returned an Obie interception 63 yards for a score. On the next possession, Karls pushed the lead to 45-13 with a 35-yard dagger to Calhoun, followed by a 57-yarder to Will to start the fourth quarter.

With :52 left in the game, Karls added his seventh touchdown on an 11-yard Choice route to Demario ‘The President’ Brown.

“This team is hungry, and irritable,” said Coach Miller. “We’re right where we’re supposed to be. We’re peaking. We’re ready for December 6.”

NFL PROSPECT AND PUNTER ALEX DUNNACHIE got one opportunity, and he made the most of it — a booming 65-yard effort that touched the heavens and reversed the field for the ‘Darkside Defense.’

THE LCFL CHAMPIONSHIP will be the fifth title appearance for the storied SoCal Coyotes, who are 2-2 in championship games. The team won the Pac West in 2012, the United Football Alliance League in 2013.

FOURTEEN POINTS separate the Coyotes from a perfect season and perfect year. On August 30, the Coyotes lost 38-24 to the Inglewood Blackhawks, currently the nation’s number-one ranked team. The Blackhawks are the LCFL’s No. 1 seed.

IN LCFL PLAY, the Coyotes have outscored opponents 441-152.