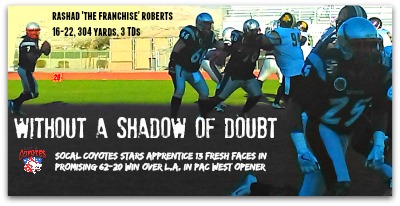 (INDIO) – Punishing College of the Desert running back LeRon Wilson (6-1, 220) gashed the visiting Los Angeles Spartans 13 times for 141 yards and three touchdowns to carry the four-time champion SoCal Coyotes (1-0) to a 62-20 win, in their spring Pac West opener on a sun-splashed afternoon at Shadow Hills.

Frank Harrison, president of General Air Conditioning & Plumbing (@General), was in attendance, along with GM Patrick Somers. The General bought out the game for fans, who were encouraged to donate to the cause of Indio firefighter Sara Thomas, who is suffering from cancer.

They were joined by Captain Robert McIlRoy, 2015 Firefighter of the Year, and an array of his Indio firefighters and first responders from Station #80. The General and the Coyotes spent the week saturating social media and local radio and television news to raise support for Sara. (If you didn’t attend the game, you can still help by clicking the link below.)

On the field, the Coyotes flexed the depth of their roster with 13 new spring starters, led by a smattering of veteran stars. Quarterback Rashad ‘The Franchise’ Roberts scored on a sprint bootleg, and completed 16 of 22 for 304 yards and two touchdowns to James ‘The Human Highlight Film’ Calhoun Jr., who had six catches for 155 yards.  Mario Brown had five catches for 114 yards.

No doubt, they had fun, too. The Coyotes unveiled a formation they call ‘Stagger Lee’ – using all-time sack leader Jack Sheffield on offense, in both the backfield at the S position, and lined up in the slot. Sheffield scored twice on two thundering short-yardage goal line carries, splattering Spartan linebackers. Inspirational safety Anthony Spencer played both ways, and led all tacklers with nine and stole an interception. Jimmy Awolesi had an interception, and Calhoun returned a third interception for a score. Kicker Dan Kelly was good on seven PATs.

There is no substitute for game experience –Coyote football is the ultimate job interview for apprenticing talent in America’s #1 Developmental Pro Football Program, evidenced Saturday by their introduction of five rookies. Besides football, players must adhere to strict dress and conduct codes, and are required to volunteer throughout their communities. Coaches noted the huge strides of second-year player Matt Arias, and rookie offensive lineman Eric Amadei. Afterward, head coach J David Miller praised his troops for doing something the 2015 fall championship team didn’t do – open the season with a league victory.

“You are courageous young men who understand commitment,” Miller told his players afterward. “You have the same options of everyone else your age, but you’re here, finding your purpose, finding your way, and putting in work – in your homes and lives, and communities.”