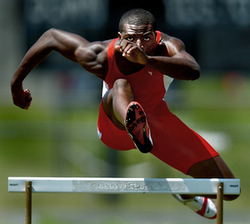 (PALM SPRINGS) — The need for speed.

Pope has a documented standing long jump of 10.36′. He hit a personal best of 39 inches in the standing vertical jump. In 60-yard change-of-direction—15 yards right, 30 yards left, then 15 yards back to the starting line—he clocked an 11.16.

“I’m not sure, but I think those are Coyote records,” joked head coach J. David Miller. “Seriously, we have work to do. The kid is pure, raw speed. He has the engine. Now we have to build the car around him — technique, route-running, catching while striding. He holds a lot of records, but not with Nate Lewis throwing footballs at his head.”

But can he take a hit?

Before that question can be answered, Coyote players are still getting used to the novelty of just having a world-class sprinter and hurdler in their midst. The cannon-armed Lewis, never to be outdone, over-threw the sprinting Pope on a simple ‘go’ route, and the ball sailed over a practice fence. Pope retrieved it — in stride — by hopping over the fence hands free.

“Lawd have mercy, did I just see that?” grinned All-American receiver Rashad “The Franchise” Roberts, as other teammates couldn’t help but smile with guarded admiration, and ahem, respect. “C’mon, man. Are you kidding me? That young man is seriously ridiculous.”

“Yes, he got our undivided attention,” chuckled Miller, who can’t hide his coach’s fascination with the challenge of turning Pope into a football player. “We have guys who think their 4.3 is fast. Marcus ran a 4.5 — over hurdles. In the 110s, he was running every 10 yards in point-nine something. Come on. Do the math.”

The son of Tarwanda McClary, Pope is a Division 1 national qualifier with honors, evident in his work ethic and fierce passion to compete, regardless of the sport.

“Do I like to get hit?,” said Pope, who played football in high school. “No. But who does? I can see myself catching that pass everyone is concerned about—over the middle—and bang, getting hit hard. Then I get up, trot back to the huddle, and say, ‘See? I did it. I passed this test.”

No question, the linebackers who roam the Southern California Football Alliance are eager to answer the question:

Can he take a hit?

Much of the Pope project will fall on assistant head coach Wayne Anderson, who last week started the process of teaching the thoroughbred track star the Coyotes Run ‘n’ Shoot playbook, which will require Pope to flex the mental prowess that made him a full scholarship student athlete at Western Kentucky.

It will also require that he do more than just run in straight lines.

“High-class problems, sure,” said Anderson. “Bill Walsh and the San Francisco 49ers had great success with (Olympic hurdler) Renaldo Nehemiah. We can do it with Marcus. There is something intriguing about a world-class sprinter running our seam route and putting the fear of God into the safety.”

But can he take a hit?

“Coach Miller preaches all the time that he wants four receivers winning a gold medal every time they run straight ‘go’ routes,” grinned quarterback Lewis. “Well, he got his wish. Can Marcus take a hit? Heck, if he gets on top of the safety, he may never have to.”

Fans and media can meet Pope in person at the team’s Media Day, Wednesday, at Central Park Bistro in Palm Springs from 1 to 3 p.m.

The Coyotes have two more practices left before the regular season. The team kicks off at 7 p.m. on August 24 against the ‪#‎SanDiego‬ Spartans in their first home game at Xavier College Prep and as a member of the UFAL Eastern Division of the Southern ‪#‎California‬ ‪#‎Football‬ Alliance (SCFA).

The Coyotes play the ‪#‎national‬ ‪#‎champion‬ ‪#‎Inglewood‬ ‪#‎Blackhawks‬ October 26. The SCFA is the only means for a desert team to win a state or national championship.