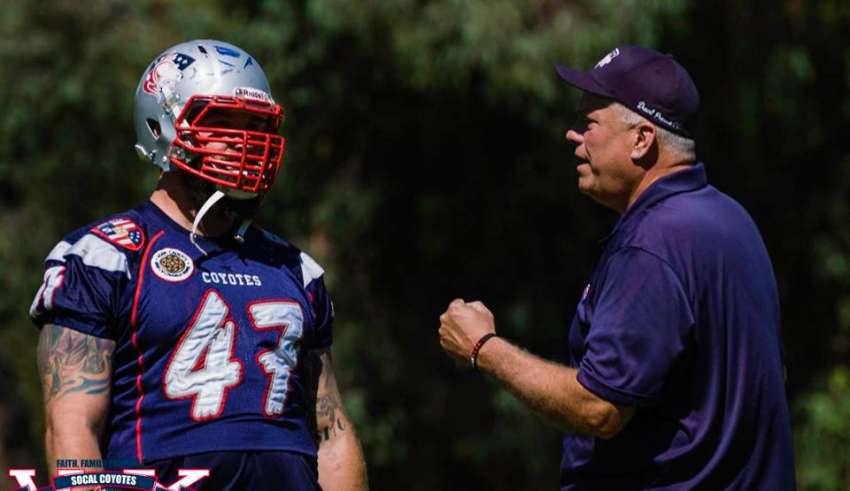 “To have the best coordinator at this level back for a second consecutive season is a critical piece for our team’s growth, and our opportunity for success next season,” Coyotes head coach J David Miller said in a statement.

“It was a short meeting,” quipped Helms. He praised Coach Ramer’s ability to “earn the respect of a veteran staff and players,” which he attributed to “a thorough attention to detail, outstanding human resource skills, and a passion for making everyone around him better.”

Coach Ramer’s rendition of the ‘Darkside Defense’ pitched seven straight shutouts in 2017, and led the Pacific Coast in sacks, turnovers and defensive points.

It is the first time the Coyotes have had the same defensive coordinator in back-to-back years since Helms himself. From 2014-16, Helms was 36-7, with two championships, before he moved into the Coyotes front office.

The Coyotes, who are now 80-13 lifetime, also plan to feature Coach Ramer more in their numerous ‘Above the Line’ leadership clinics, symposiums and camps, which impact 30,000 youth each year.

Coach Ramer has coached at Norte Vista, La Sierra and Grand Terrace High Schools, and brought the Coyotes extensive experience on both sides of the ball.

The Fontana native graduated from La Sierra High in 1978, where he was a first-team All-Conference lineman under head coach Roger Folsom. Coach Ramer played for the legendary Jim Kross at Riverside City College, before earning a full scholarship to Montana Tech.

Coach Ramer is the proud father of four grown children and three step-children. His oldest son Andrew set a school record as an offensive lineman at Norfolk State, with 45 consecutive starts.

His daughter Meghann graduated from Fresno State, and is now a teacher. His middle son Austen was an All-American water polo goalie at California Baptist University, before playing professionally in Australia. His youngest son Chandler played football at Pacific University in Oregon.

Coach Ramer’s continuing education includes a degree in business management from Azusa Pacific University. He advanced to the University of California School of Business, where he received a Certificate of Completion in the Supervisor Development Program.

Coach Ramer also attended the Marshall School of Business at the University of Southern California, where he completed their Food Industry Management Program.

Outside of football, Coach Ramer has been employed by Stater Bros. Markets for 36 years.

As Supervisor of Safety & Training, he oversees more than 600 employees at the Stater Bros. San Bernardino-based Distribution Center, which encompasses over 2.1 million square feet and is the largest one-roof supermarket distribution center in America.