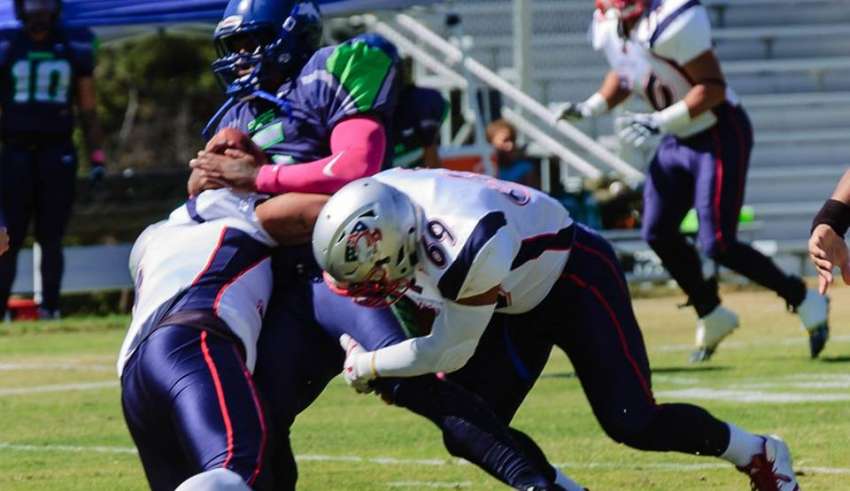 (SOBOBA) – CFL prospect Jarrod Harrington threw four touchdowns and ran for two more while a savage ‘Darkside Defense’ posted a club-record sixth-consecutive shutout to lead the SoCal Coyotes to a 68-0 win over the California Sharks at the picturesque Oaks Sports Complex in the San Jacinto mountains. 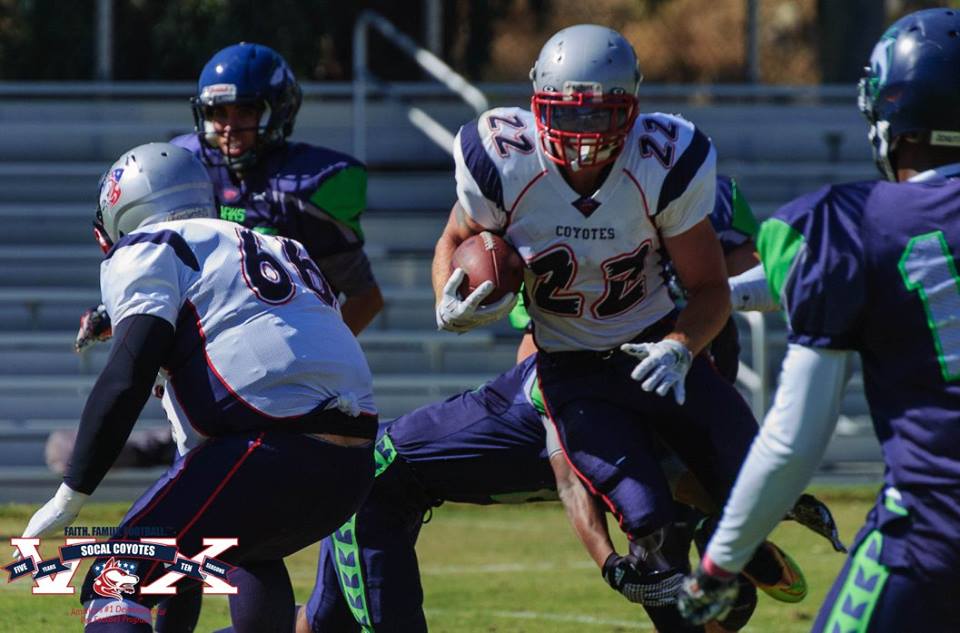 Running back Dylan Peebles, a former Cortland State All-American, set a Coyote franchise rushing record with 218 punishing yards on 11 carries, and one touchdown. The Coyotes closed out the Pacific Coast regular season, their first in the World Developmental Football League.

The gutty Sharks threatened to be the first team to score on the Coyotes since 2016, with several possessions deep in SoCal territory. But the proud Coyote defense – with the shutout streak on the line – would have none of it.

California had a first-and-goal from the SoCal 10, but a fierce strip-sack by all-time Coyote sack leader and Arizona State product Jake Sheffield (66 career) was scooped up by defensive end and former Chicago Bear Michael Ambrose, who rumbled 90 yards for a back-breaking score.

Harrington, the former Campbellsville University All-American and CFL Winnipeg slot back prospect, made his second start as the Coyotes emergency quarterback, after injuries to Todd Marinovich and Michael Karls. Harrington finished 15 of 26 for 210 yards, including a 68-yard rainbow touchdown down the left sideline to rookie Joel Felix, who made his first start. Josh Meier, LeRon Wilson, Matt Arias also caught touchdowns.

Washington State rookie defensive end Jeremiah Mitchell, in his first start, had 2.5 sacks to begin his Coyote career. University of Wisconsin-Lacrosse linebacker Will Hoglund and defensive tackle Jordan Warford also had sacks, who were joined by Ambrose, Sheffield and Young.

The Coyotes are riding a 26-game win streak that dates back to 2015. Behind a relentless Silver Stretch Run ‘n’ Shoot attack, the Coyotes have outscored opponents 705-43 in their last 13 games.

On Saturday, October 28, the Coyotes will host the conference championship at Shadow Hills Stadium. Kickoff is 6 p.m.

It will be the Coyotes eighth title game appearance in 10 seasons.