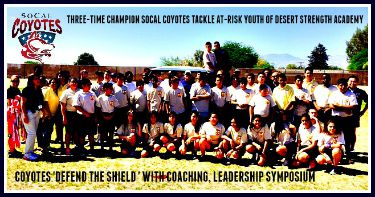 “Show me your friends, and I’ll show you your future” – that was the recurring theme form head coach J David Miller and his players.

Open Q & A discussion centered around life, choices, thoughts and actions that prevent ‘one second of stupid’ from becoming a ‘lifetime of regret.’

“There were a lot of smiles on the field today,” said Riverside County Deputy District Attorney, Douglas Gee.

The summer camp is part of Riverside County’s six-month Youth Accountability Team program. Most of the volunteers who work at the camp also work in law enforcement. They range from police officers to district attorneys.

“Most of these kids have experienced negative things with officers, whether it be out in the field or us responding to their homes and dealing with their parents,” said Cathedral City Police Officer, Heather Olsen.

“This is a positive experience for them.”
The theme of this year’s camp is bridging the gap between the at-risk youth and the law.

“We’re trying to figure out how to build positive relationships between the two different groups and let them understand what we’re thinking and how we approach situations,” said Deputy Probation Officer, Adrian Olvera.

“We’re not against them. We’re here to enrich their lives.”

“What we really want them to understand is the decisions they make, the friends they make are really going to have ramifications beyond their teenage years,” he said.
Statistics show the program works.