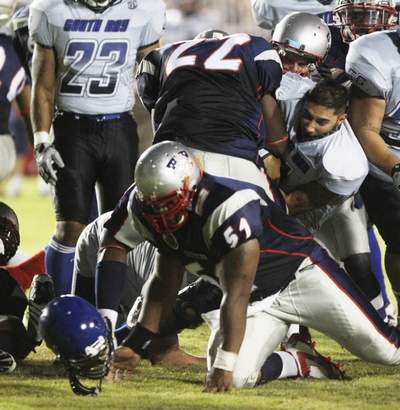 (PALM DESERT) — The bumper-to-bumper traffic snaking from the I-10 corridor off Cook Street toward the bright lights of Xavier College Prep made it clear the valley was ready for the 2013 debut of their desert champion SoCal Coyotes against the San Diego Spartans.

Once inside, a standing-room only crowd of 2,231 couldn’t wait to see how the vastly improved Coyotes would fare against the steep competition in the Southern California Football Alliance, one of the nation’s most prominent AAA conferences among 800 teams.

For the Coyotes, however, the results looked strikingly familiar — a devastating 44-0 whitewash of the Spartans, behind a blistering demonstration of the quick-strike Silver Stretch Run ‘n’ Shoot offense and a Darkside Defense that legally should come with its own ambulance.

As a worldwide radio audience listened live on Team 1010 KXPS, the Coyotes ripped into the Spartans, rolling up 501 yards in total Silver Stretch offense behind four touchdowns from quarterback Nate Lewis.

The former 2012 National Player of the Year completed 24 of 34 for 321 yards, with 11 of those going to All-American Rashad “The Franchise” Roberts for 176 yards and two scores. Former Arena Football stars Kevin Page and AJ Allen each added two more scores from Lewis.

But the real story was the entire Darkside Defense, who humbled San Diego by only allowing them across the 50 twice, and inside the 30 once. The Coyotes brought devastating waves of pressure that sent Spartan helmets flying, jaws popping, and hitting so fierce that Spartans runners seldom ventured past the line of scrimmage.

Former NCAA preseason All-American defensive end Devin Howard was a relentless, disruptive force, to the point that San Diego tried countless blocking schemes — two tight ends, a fullback, traps, draws, and double-teams – to slow him. Nothing worked. Howard spent the entire night in the Spartans backfield, which created opportunity for chinstrap-popping linebacker Devin Jones, who led all tacklers with 16.

Kicker Dan Kelly converted all five PATs, and connected on field goals of 45, 39 and 48 yards.

For the Spartans, it could have been much worse. The Coyotes left 34 points on the field: A 26-yard touchdown run by rookie running back Nigel Simmons was nullified by holding; three different receivers dropped touchdowns in the end zone; and Kelly missed from 51 and 46.

“We have a lot of work to do,” said head coach J. David Miller, who picked up the 75th victory in his Hall of Fame career. “We played no preseason games, so we were rusty. It’s behind us, and now we turn our attention to the Thunder. There are no days off in this league.”

The Coyotes have a bye week, then return home to Xavier against the San Diego Thunder on September 7.

For an immediate reply from the SoCal Coyotes, email them at [email protected] or visit www.thesocalcoyotes.com.

The Coyotes are the nation’s only non-profit sports leadership organization that fields a professional football team.