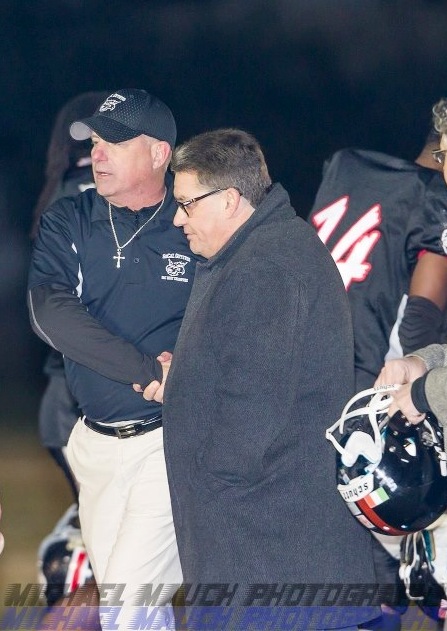 “We don’t need sunshine soldiers or summer patriots,” said J. David Miller, Coyotes president and head coach, in appointing Mr. Mezacapa, 51, a former CEO of Source Diagnostics West, COO of Desert Medical Imaging, and the former director of JFK Memorial Hospital. “We wanted a man of integrity, a distinguished warrior, with unimpeachable character and a history of service. We got our man.”

Mr. Mezacapa, who is also a former Indio Businessman of the Year, immediately assumed control of the Coyotes ground-breaking Head of household Work Leadership Program (HOWL), which gives players the opportunity to learn job skills and develop sustainable income. Among his other GM duties, he will engineer the executive sales and marketing programs of Coyote sponsor GoMobile Solutions, Inc., a leading provider of mobile apps.

“Paul shares our vision,” Miller added. “Our goal is to give every young man who walks through the door the life skills to ‘Defend the Shield’ of faith, family and football. From the board room, to the locker room, Paul is committed to making the Coyotes the premiere AAA football non-profit sports leadership organization in the world. Together, we are determined to plant trees under whose shade we never expect to sit.”

He is also formerly commissioner of the Coachella Valley Youth Football League, where over an eight-year period he served as the catalyst for the growth and development of more than 3,500 athletes, 38 percent of whom would later attend college. The former Sinatra Foundation ‘Man of The Year’ left his position with Riverside Community Hospital to join the Coyotes full-time.

“I accept the challenge before us,” Mr. Mezacapa said. “I do believe the Coyotes program can affect the world. “I will be in the office tomorrow, at 9 a.m., ready to write history with the SoCal Coyotes.”

Mr. Mezacapa steps in as general manager “with character, courage and competence, and a compelling vision to educate, equip and evaluate,” said Miller. “Paul has complete authority to establish and oversee a professional, developmental plan for the entire organization, as set by the CEO and approved by our board of directors.”

Miller, the former Senior Vice President of the five-time World Champion Tampa Bay Storm of the Arena Football League, raised eyebrows with his recent hiring of Fortune 500 executive Kerry Ryan, of Orange County. Now Mezacapa will work side-by-side with Ryan in the implementation of the team’s meteoric growth. No football team in the history of Coachella Valley has had an impact on its community as quickly as the SoCal Coyotes non-profit sports leadership organization.

From inception, the team has set – and achieved – the highest standards in charitable work, job development, mentoring – and championship football.

The Coyotes host the Coachella Valley’s first international pro combine this Sunday, June 30, at Xavier College Prep. The team is partners with EUROStopwatch.com, whose scouts and coaches will be on hand.

As a member of the Southern California Football Alliance, the Coyotes open at home August 24 against San Diego at Xavier College Prep. Kickoff is 7 p.m. The team opens training camp July 23. The SCFA is the only means for a desert team to win a state or national championship, and is home to the perennial national champion Inglewood Blackhawks.

For more information on the SoCal Coyotes, the HOWL Program, season tickets, or to schedule an appointment with Mr. Mezacapa or another team official, email [email protected], or call 760.668.5810.