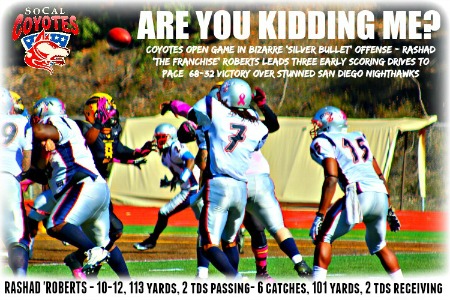 (SAN DIEGO) – They call the Run ‘n’ Shoot offense of the three-time champion SoCal Coyotes the ‘Silver Stretch.’ What the Coyotes put on the field to start the game against the playoff-bound San Diego Nighthawks perhaps should aptly be called the ‘Silver Bullet.’

The Coyotes, who would ultimately win the game 68-32 and improve to 10-1 on the year, made a huge statement: Yes, they are richly talented, yes, their bench is deep, yes they can play guys out of position, and no, they are unafraid to try new things at the start of a game against the best another playoff team can throw at them.

What were they thinking? Listen carefully, because these moves baffled everybody in the stadium. Under the eye of the RAM Sports Network cameras, who filmed the game and will be rebroadcasting across multiple media platforms, the Coyotes bizarrely started veteran receiver Rashad ‘The Franchise’ Roberts at quarterback, moved running back Warren Matthews Jr. to the slot, started back-up running back and former San Diego Charger Brandon Sullivan at S-back, started star safety LeRon Wilson – tied for the league lead in interceptions – at the outside Z receiver position, and moved Ryan Pervine – a starting linebacker – into the other slot position.

On the offensive line, the Coyotes started backups Andrew “Doobie” Dueber and Johnny Rosales. Leave it to the Coyotes to turn a late-season game it into an experiment that was equally fascinating and mind-scratching, and demonstrated that the system, and the organization, and the character and integrity of the players who ‘Defend the Shield’ regardless where they may find themselves on the field, can absorb just about anything.

“The number-one strength of great football teams is communication,” barked head coach J David Miller to his troops, moments before kickoff. “Prove you can play together, prove you can communicate, prove that if we are ever forced again into these ridiculous circumstances, we will find a way to win purely on experience, character, and the sheer talent of the best football players to ever wear the Coyote uniform.”

Um, OK, whatever. But hand it to them – the results were shocking, and spoke volumes. Roberts, the Coyotes third-leading receiver this season and listed as the number-three QB on the Coyote depth chart, ran the team effortlessly, carving up the starting San Diego Nighthawk defense like it was just another sunny day at the nearby San Diego beach.

Roberts led touchdown-scoring drives on all three of his first-quarter possessions, completing 10 of 12 passes for 113 yards, and rushing for 54 wildcat yards. The Coyotes offensive line, behind veteran center Victor Gil, trapped and pulled and smacked the San Diego defensive front, and Sullivan pounded the Nighthawk interior like he was still playing for Chargers.

Sullivan broke off tackle for 55 yards. Roberts threw a 45-yard touchdown to DeMario ‘The President’ Brown. Roberts, a former high-school quarterback, spotted man coverage against Wilson, and laced a perfect 35-yard sideline rope for another score. Pervine ran tough routes over the middle, and caught critical first downs. Throw in a pair of two-out-of-three two-point conversions, and the ‘Silver Bullet’ was up 22-7, when starting quarterback Zach Adkins, receiver Stevie Will and slotback and league-leading superstar receiver James Calhoun finally entered the game, and the Coyotes moved everyone back to their ‘normal’ positions.

The Coyotes led 56-14 at halftime, and to prevent injuries, heavily rotated the rest of their bench to coast to the final outcome of 68-32.

“You shouldn’t wait until your house burns down to get fire insurance,” Coach Miller explained to the RAM network after the game. “The start of today’s game taught us that, with the playoffs just two weeks away, we’re capable of doing all these things to win football games if injuries or adversity force us into catastrophic situations.”

THE COYOTES ‘DARKSIDE DEFENSE’ had unlikely heroes of its own, notably Texas El-Paso rookie Nick Gathrite, who is clearly coming into his own as a pro. All afternoon, Gathrite showed speed, guile and remarkable ability, defensing five passes, intercepting two and returning one 50 yards, and forcing a fumble.

“Nick may appear small on paper (5-9, 180), but he’s big-time on the field,” said Coach Miller, perhaps sticking Gathrite with a new nickname – Big Time. “His kind of intelligence and ability are rare. He has a huge future. He just needs to play. I think he’s got Arena-1 level talent for sure, and with a little more experience, I won’t be surprised if somebody takes a shot on him on the big field.”

LEAGUE-LEADING QB ZACH ADKINS ENTERED THE GAME two-thirds of the way through the first quarter, and did what he’s done all year: Throw touchdowns, and not throw interceptions. He started slow, completing just four of 12 passes in the first half for 128 yards, three of them lethal touchdown strikes to Stevie Will Jr., James Calhoun Jr., and Rashad Roberts. Adkins caught fire in the second half, completing nine for 13 for 187 yards, with a pair of 15-yard touchdowns to Roberts and Calhoun. He finished 13 for 25, for 305 yards, and five touchdowns, and also ran two times for 33 yards.

With 3,186 yards, 47 touchdowns and only two interceptions, Adkins has to be a lock for league rookie of the year, if not league MVP. Adkins has only played in eight games – two less than Inglewood’s Kyle Parrish, who is chasing him for league totals, and Parrish has thrown 14 interceptions.

THE RUN WAS AS GOOD AS THE SHOOT for the Coyotes Saturday, as the champions had their best day all season – 246 yards – on the ground. Sullivan rushed seven times for 110 yards and the single touchdown. Coyote leading rusher Warren Matthews Jr. rushed five times for 103, including a long touchdown run of 40.

MILLER ALSO PRAISED THE EFFORT of safety Anthony Spencer, who returned a fumble 65 yards for a touchdown, defensed four passes, made three tackles, and nearly had two more interceptions. “Spencer is quietly having a huge year,” the coach said. “Look at his film. Show me how many times he’s been beat, been out of position or guessed wrong all year. Not much.” Veteran linebackers Pervine and Devin Jones took over the game in the first half, punishing Nighthawks runners and leading a unit that forced San Diego into five three-and-outs while the Coyotes ran up an impossible-to-overcome lead. Linebacker/end Gary Young led all tacklers on the day with six stops and a forced fumble. A steady rotation of ‘Coyote Lite’ defenders were led by steadily improving rookies Dorian Cannon and Cody Carhart, who had five tackles, as did veteran LeRon Wilson.

HOW GOOD IS VETERAN OFFENSIVE LINEMAN Cedric Cox? Well, still good enough to play both ways, and do it well. He started the game at nose tackle, where he played in college at Florida State, and played his first Coyote five seasons until Miller converted him to offensive line last year. Cox, now a freshman coach at Coachella Valley High School, had a busy afternoon. He coached up the rotation on the Coyotes offensive line. He rotated on defense and applied huge pressure on Nighthawks quarterbacks. He didn’t surrender a sack and opened huge holes for Coyote runners. The former Coyote Defensive MVP (spring 2013) “is our Vince Wolfork, give or take a year and a couple of Popeye’s biscuits,” smiled Miller. Wolfork, the veteran New England Patriots defensive lineman, is 6-2, 320 pounds – and 33 years old. Cox is 6-1, claims to be 260, and says he’s still 25 years old. You figure it out.

THE COYOTES TRAVEL TO CHINO this Saturday to face the SoCal Eagles to close out the regular season. The Coyotes will enjoy a two-week rest before returning to action November 21 in the first round of the playoffs.

THE COYOTES 10-GAME WINNING STREAK ties the team regular-season record. In 2012, the Coyotes lost their first game before reeling off 10 consecutive wins en route to winning the Pac West championship.