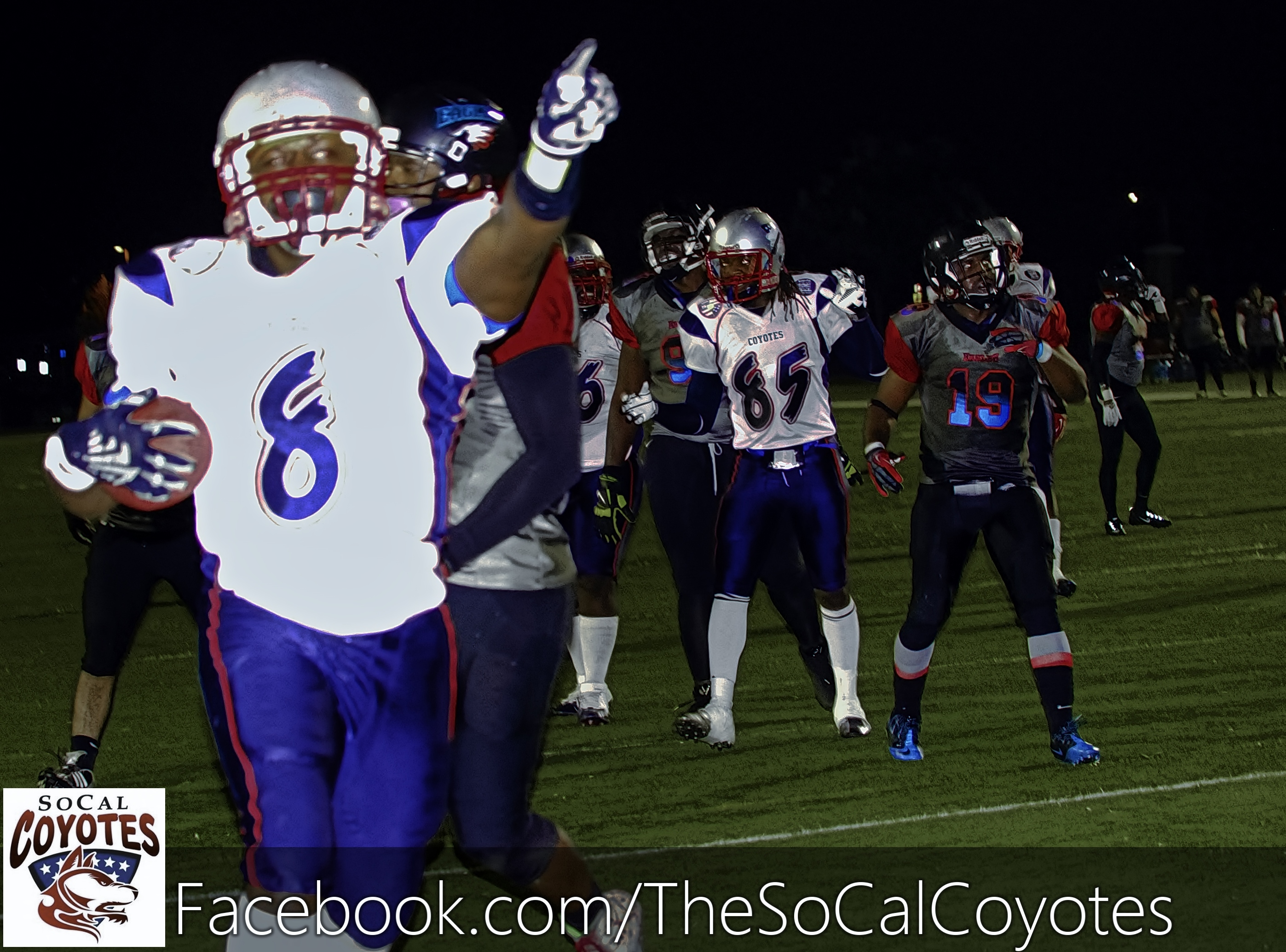 (CHINO) – The two-time AAA champion SoCal Coyotes held the Chino Eagles to 87 total yards in a dominating 71-7 victory, securing the No.2 playoff seed and a first-round bye in the nation’s top-ranked LaBelle Community Football League.

The ‘Darkside Defense’ forced three fumbles, had three sacks, and 11 tackles for loss, and held the Eagles to minus 33 yards rushing on 18 attempts.

“There are only two feelings at the end of a regular season – euphoria or disaster,” said head coach J David Miller. “We’re grateful that the Coyote franchise and its fans have never had to feel the second. We got the win, everyone’s healthy, and all focus is now on the playoffs.”

Fans who drove hours to see the SoCal Coyotes parade of stars didn’t leave disappointed. The veteran Coyotes literally ran from a script as they fine-tuned their offense, defense and special teams for the 2014 fall playoff run.

-Slotback Billy Eichmann led all receivers with 10 catches for 176 yards and two scores.

-‘Sugar’ Shaine Boyle returned a first-half punt 53 yards for a touchdown. Not to be outdone, rookie James ‘The Human Highlight Film’ Calhoun answered with a 55-yard second-half punt return for a score.

-Quarterback Michael Karls completed 23 of 38 passes (61 percent) for 332 yards and two touchdowns. He also rushed for a third, to give him 30 on the season. It was Karls’ fifth consecutive 300-yard game.

-Kicker Dan Kelly hit from 27 and 44 yards, and laid down a picture-perfect onside kick that was recovered by Billy Eichmann and led to another Coyote score.

-THE COYOTES BECAME the only Coachella Valley football team in desert history to post 40 victories in a two-year span. Since 2012, the Coyotes are 40-9 in five back-to-back seasons, and have led three different leagues in total offense. It was the 90th career victory for head coach J David Miller, whose teams have never missed the playoffs.

-THE COYOTES ONLY TRAVELED WITH 25 players, and their young developmental defensive stars led the way. These included rookies Javonte Brown, Jeremiah Spicer, AJ Fanene, Moses Betancourth, James Calhoun and Will Harris. Linebacker Devin Jones played only one series, defensive end Jake Sheffield only one quarter, and linebacker Cade Cowdin only one half. Kelvin Cain did not play.

THE ‘WIN-DEN’ –On Saturday, November 22, the Coyotes will host a playoff game for the first time at the ‘win-den’ — their 2014 Hamilton High School home in the Anza mountains. The opponent will be the winner of the Downey Apaches – San Diego Thunder first-round playoff game. At the ‘WIN DEN,’ the Coyotes have out-scored opponents 203-70.

THE COYOTES FINISHED 8-1 in league play, 10-1 overall in 2014, having won two games against paid professionals in May and June.

FOURTEEN POINTS separate the Coyotes from a perfect season and perfect year. On August 30, the Coyotes lost 38-24 to the Inglewood Blackhawks, currently the nation’s number-one ranked team. The Blackhawks are the LCFL’s No. 1 seed.

IN LCFL PLAY, the Coyotes have outscored opponents 382-139.