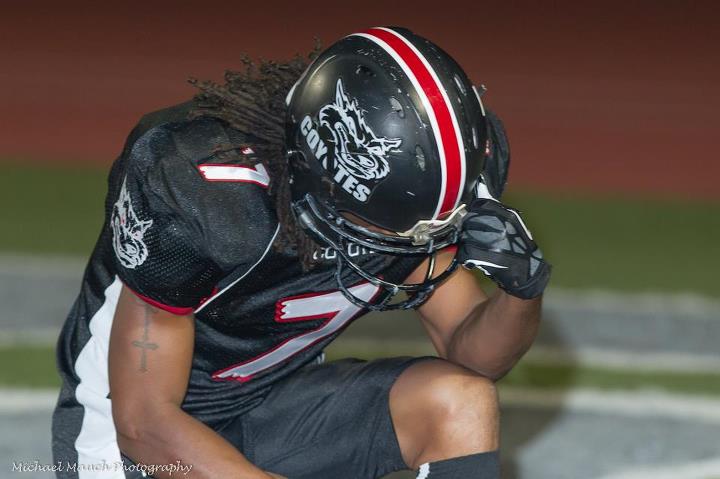 Are we better than we were in November? Not just on the field, but off the field?

One day after finishing 10-3 and spring-league runner-up, SoCal Coyotes head coach J. David Miller sat down Monday with assistant head coach Wayne Anderson Jr. and the rest of the organization. Today, he will discuss it live at 12:15 with host Julie Buehler on Paw Patrol (www.team1010.com).

The purpose: To evaluate those questions as the team prepares to move forward with its aggressive plans for its first fall season in the powerful Southern California Football Alliance. The Coyotes grueling season began with practice in November for the All-Star game; then opened with the Catalina Kickoff Classic in December.
They started the regular season the first weekend in January.

“First and foremost, we want God’s will for our lives, and in turn, the lives of everyone involved in our organization,” said Coach Miller. “The (Coyote) shield is about defending faith, family and football. What’s our report card in those categories?

“Did we become better fathers, better husbands, better men, better friends, and better citizens in our community? Did our guys set examples for young people and fans that made everyone around them better, or worse?

“In the face of great criticism and adversity, did we continue to take a daily personal inventory and continue to march uphill and be willing to change our own hearts and lives?” Miller continued.

“Our guys did. I am so proud of our young men who fought to improve in every category and finish the season. They could’ve folded their tents. They didn’t. They persevered. The first championship you’ll ever win in your personal life is learning not to quit when it hurts, or when it’s hard.

“Our guys learned lessons they will take with them for life. We finished every single thing we started, beginning with the process of changing the culture of minor-league football. We refused to play backyard street-thug ball, and instead delivered a product where you could bring your children, and they could be proud of daddy and what they saw and took from it.

“Our guys volunteered all over the community and the state. We improved every environment in which we were placed. We respectfully and thankfully till the ground we’re given, and we are determined to grow fruit where it once was barren. In the process, we became a pretty decent football team, too.”

Decent? The Coyotes were largely a group of inexperienced, undersized players that averaged 23 years of age. With a sprinkling of star talent, the team rolled up 4,191 yards total offense. Defensively, the team replaced four All-Americans with rookies and five times held opponents to 10 points or less. As a team, the Coyotes battled to a second league title game in as many years.

No desert football team other than the Coyotes — high schools or junior highs included — ever won 19 games in 11 months, much less in their first two seasons of existence. In the process, the Coyotes became a trusted feeder program, with three players trying out for the Arena Football League and two more with remaining college eligibility now vying for scholarships at two different schools.

In-house, the Coyotes are proud of their Head of household-Occupational-Work Leadership (HOWL) program, which helped players find jobs. All of the players participated in local churches, outreaches, charities and schools.

The three games the Coyotes lost were to a veteran team, “but the only way to beat a veteran team is to eventually become one,” Miller noted. “That’s what we mean when we talk about taking those Huggies off. Spring ball was a great preseason to give our young guys game experience and get better for the fall.”

Coach Anderson will leave Wednesday to return home to Delray Beach, Florida, where he will reunite with his wife Kathryn. Meanwhile, the Coyotes are soon to announce its affiliation with a pro combine that will hold tryouts around the state to fill out its roster. Assisting the Coyotes are former members of NFL, CFL and AFL coaches with whom the coaching staff has decades-long relationships.

Miller sat down with quarterback Nate Lewis Tuesday morning to evaluate the future of the quarterback, his Arena football experience, and their common goals as coach and player. Neither would give away all the details of the meeting, but both agreed that faith and family was a centerpiece of the conversation.

“Every time I try to do things my way, instead of God’s way, I fail miserably and fall flat on my face,” Miller told his quarterback, discussing major changes in his own life.

A chuckling Lewis responded with the same answer that Miller has given him over his two record-breaking seasons in the Run ‘n’ Shoot.

“Then stop trying to change the offense, Coach,” Lewis smiled.