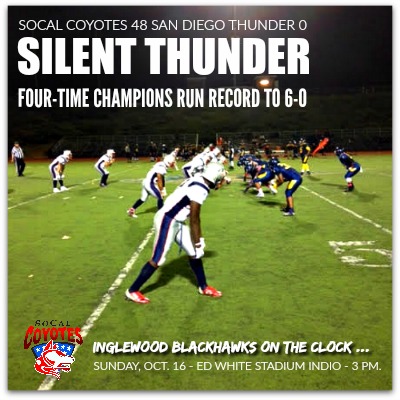 Among SCFL leading receivers, Harrington, Ward and Roberts are now 1-2-3.

League-leading running back Dylan Peebles, 6-1, 225, ran over, through and around a frustrated Thunder defense for 135 yards on 10 carries. Zavier Steward, the SCFL’s second-leading rusher, slashed and dashed through the hapless Thunder for another score of his own.

The Coyotes (6-0) remain the Southern California Football League’s only undefeated team, and have outscored opponents 380-22. In the season’s final regular-season game, the Coyotes return home this Sunday, October 16, to host the arch-rival Inglewood Blackhawks (4-1) at 3 p.m. at Ed White Stadium in Indio.

Last year, in three franchise-record-setting wins over the Blackhawks in a single season, the Coyotes outscored Inglewood 117-64. Two of those were on the road in the challenging environment of Jackie Robinson Stadium, including the last one, a decisive 31-14 victory that made the Coyotes defending LCFL champions.

(REFRESH THIS STORY AND PAGE throughout the day for continued Thunder wrap-up, updates, official Hudl box score and stats, photos, highlights and more.)

GENERAL AIR CONDITIONING AND PLUMBING gave away more than $4,000 in prizes and gift cards during the Coyotes last home game. Fans will have their next opportunity on Sunday, October 16, when the Coyotes face the Inglewood Blackhawks at 3 p.m.