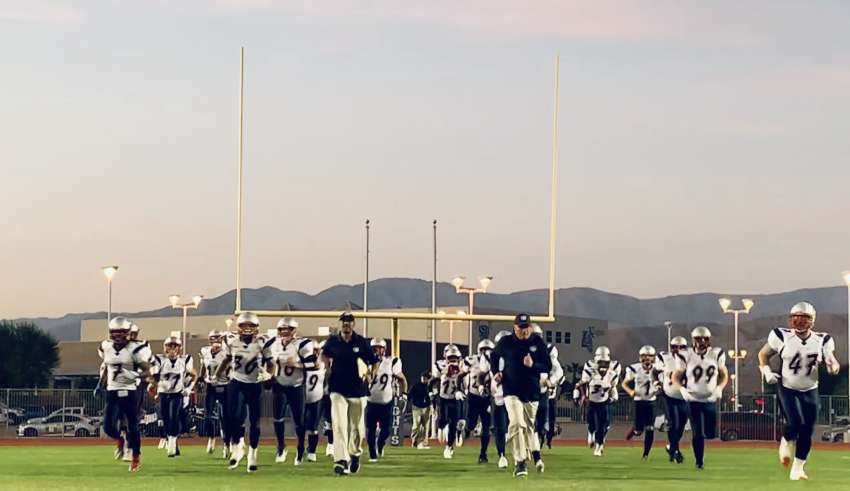 In its unique arrangement with DFI, the GDFL is now home to the Coyotes, one of the nation’s most dominant brands, and pre-eminent sports leadership franchises.

On the field, the Coyotes enter the GDFL as defending Pacific Coast Conference champions and the flagship franchise of DFI. Off the field, as a 501(c)(3), they are among the nation’s elite non-profit leadership organizations.

‘Above The Line’ Leadership

A significant portion of the Coyotes’ meteoric online growth can be attributed to its numerous ‘Above the Line’ leadership camps, clinics, and symposiums, which impact 50,000 youth annually. The Riverside County District Attorney’s Office and Sheriff’s Department rely on the Coyotes for their camps to at-risk youth, and Coyote players and coaches volunteer throughout the Coachella Valley 52 weeks a year.

The Coyotes’ non-profit also supports a host of other non-profits and charitable organizations, ranging from Rotary Clubs, women’s health organizations, ministries like The Bridge Calvary Chapel, the Uganda-based Agape Children’s Village, and an array of African mission outposts.

The organization has meticulously built dominant national brands now synonymous with ‘Faith, Family & Football,’™ and other trademarks such as ‘Building Champions, Building Men’™ and ‘Defend the Shield’™. 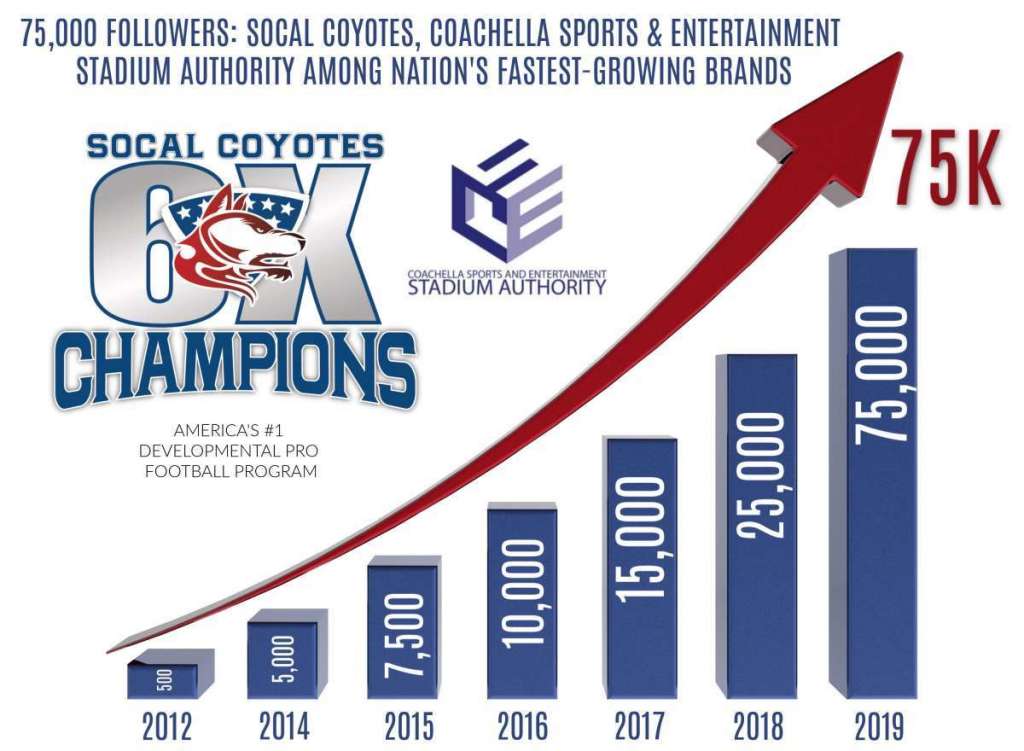 SoCal brings an unprecedented national footprint to the GDFL. In recent months, the Coyotes shot past 75,000 followers across its multiple platforms, which include social media channels Twitter, Facebook and Instagram. Their digital-media dominance has made the Coyote’ one of the nation’s fastest-growing sports brands.

Nationally, the upward-trending Coyotes have far and away more likes and followers than any developmental pro football franchise in the country. In just seven years, the Coyotes have surpassed every professional indoor Arena team – and are in respectable company in high-low comparisons of other prominent mainstream sports and facilities.

The Coyotes are headquartered in the Coachella Valley, also the fastest-growing region in Southern California, extending approximately 45 miles from Palm Springs to the Salton Sea. The desert hosts two of the world’s largest venues each year in ‘Coachella’ and ‘StageCoach,’ and during peak season nears 1 million people call the Coachella Valley home.

Through a dizzying array of programming that ranges from sports opinion shows, faith-based ministry, heavy local high school coverage and of course, their own games, the have unleashed an arsenal of media choices that stay on message, maintain consistency and embody the values of the brands and their plans that align with their corporate goals.

“Creative uses of real-time visualization drives our social media to another level,” says head coach and non-profit founder J David Miller. “This goes a long way in the millennial world. We’ve turned our social platforms into search engines, which gives us traction across all of our channels. We’re able to track trends, search conversations and categorize content.”

“We have clean, over-arching messaging – such as ‘Faith, Family, Football,’ or ‘Defend the Shield,’ driven by smaller, niche growth of ‘communities within communities,'” says Coyotes SVP Ron DiGrandi.

“An example is our breakout coverage of high school sports, or faith-based ministry. We’re delivering diverse content across multiple platforms with niche targets that are difficult to duplicate.”

For advertisers who seek a 24/7 social media presence and wish to ‘ride-along’ relevant, clean content, this strategy separates the Coyotes from its competitors, and delivers messaging across multiple platforms into even the narrowest markets.

Alvarez credits the social intelligence platforms of the Coyotes and CSESA for their measurable results, which allow him to cull data and “see” what matters most, while detecting moments or trends that need action, and allow him to “listen” to the organizations’ social media followers in a smarter way.

The Coyotes non-profit is also supported by Coachella Sports & Entertainment Stadium Authority (CSESA), which is barely more than a year old, but has already become a household name.

CSESA’s primary mission is the ongoing development of The Shield at 1 Coyote Way, a mixed-use, $400+million, medical, Sports and Entertainment development scheduled for the 125 acres surrounding the Classic Club in Palm Desert, which is frequently in the news and garners a respectable share of earned media.

The Shield will be the first of its kind for American developmental football.

Currently, the Coyotes and CSESA are one of the Coachella Valley’s largest originators and producers of sports content. This includes live game coverage and daily sports programming.

For its corporate partners, sponsors and advertisers, the Coyotes soaring popularity delivers significant viral brand support in a sea of social media.

FAITH, FAMILY, FOOTBALL is the real mission of the Coyotes, and not surprisingly, something that dates back to the great Vince Lombardi in 1959. More than game tape. More than a weight room. More than a 40 time. The Coyote mission reaches far beyond the actual gridiron, deep into the development of young athletes as fathers, husbands, and men.

SEVENTY PLAYERS EACH YEAR earn the distinction to ‘Defend the Shield’™ in the uniform of the SoCal Coyotes. Many will earn a shot with NFL, CFL or AFL opportunities, or graduate into business careers.