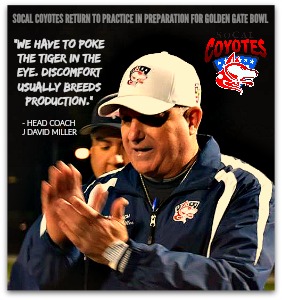 (SHADOW HILLS) — The rested four-time champion SoCal Coyotes return to practice today for a month of preparation before their February 20th San Francisco Golden Gate Bowl, and the head coach of America’s #1 Developmental Pro Football Program promised he will waste no time “poking the tiger in the eye.”

“Pride, arrogance, complacency like to follow results and rewards, which we achieved through humility and hard work,” says head coach J David Miller, whose Coyote teams are 63-11 lifetime. “We’ve already challenged our team captains to check everybody’s ego at the door, recognize (complacency) for what it is, find it, cut it out, and get back to work.

“Making guys who just won a championship mad and uncomfortable is tough, but we’re all professionals here, and you have to poke the tiger in the eye,” Miller adds. “Discomfort usually breeds production. We cannot act like we’ve arrived, because if we do, (bowl opponent) the South Beach Outlaws are going to beat us 100-0.”

The Coyotes return with clear goals: Win a bowl title, then win a spring championship, all before the end of May. Those milestones would give the Coyotes a bowl win and three different league championships in a single calendar year, a feat few teams, if any, could ever duplicate.

Heavy stuff, even for a roster deep in talent that beat the Inglewood Blackhawks by an average margin of three touchdowns three times last fall. The Coyotes won the coveted LCFL championship in once-feared Jackie Robinson Stadium, and left Inglewood with a stockpile of league hardware – MVP James Calhoun, Offensive Player of the Year Zach Adkins, and Special Teams Player of the Year Dan Kelly.

With all that praise flying around, and Coyote players now ‘on the radar’ at CFL and Arena Football tryouts, somebody has to be the voice of reality. Naturally, it’s their head coach.

“We don’t think much about the past,” Coach Miller says. “We always say, ‘Be where your feet are.’ What’s happening right now? What do we need to do to affect that? That’s where our energy has to be focused.”

With some players transitioning out, and others transitioning in, Coach Miller says the Coyotes will not be the same team that walked off the field with the trophy on December 6 – and some of last year’s rookies are ready to make their move on a shifting depth chart.

“We start again today at zero and build from there,” Coach Miller said. “We need guys to come in swinging, competing from the opening bell. Bombs away.”

THE COYOTES ARE SCHEDULED TO RUN 75 plays in their first day back, refreshing base offensive and defensive concepts and addressing conditioning as a top priority. The methodical Coyotes are well-rehearsed in their ramp-up for back-to-back schedules, and big games, and are systematic in their approach. “We’re a veteran team – it’s literally about practice laps on the track, feeding enough reps into the machine,” says assistant head coach Shane Helms.

THE SOUTH BEACH OUTLAWS ARE 2016 national AAA title contenders and former champions of the Pacific Coast Football League. The Northern–Southern California showdown between these two powerhouse AAA programs could factor in 2016 national title implications, said NFE President Jim Nugent, whose organization ranks the Coyotes as the Western Region’s #1 team, ahead of the Inglewood Blackhawks and California Raiders.

OPEN TRYOUTS AND ANNUAL COMBINE DAY for the Coyotes is Saturday, February 13, at Shadow Hills. For more information on how to become a Coyote, see ‘Events’ on the Coyote Facebook page. There is no charge for Coyote hopefuls vying for a roster spot on America’s #1 Developmental Pro Football Program. Attendees at Combine 2016 also will enjoy speed /strength /conditioning /training from Coyote linebacker – and Official Strength founder and fitness icon – Cade Cowdin.

FEEL THE POWER OF the fastest-growing sports brand in desert history as a corporate partner of the four-time champion SoCal Coyotes. Ron DiGrandi, SVP Business Development, is waiting for your call at 760.285.7073.