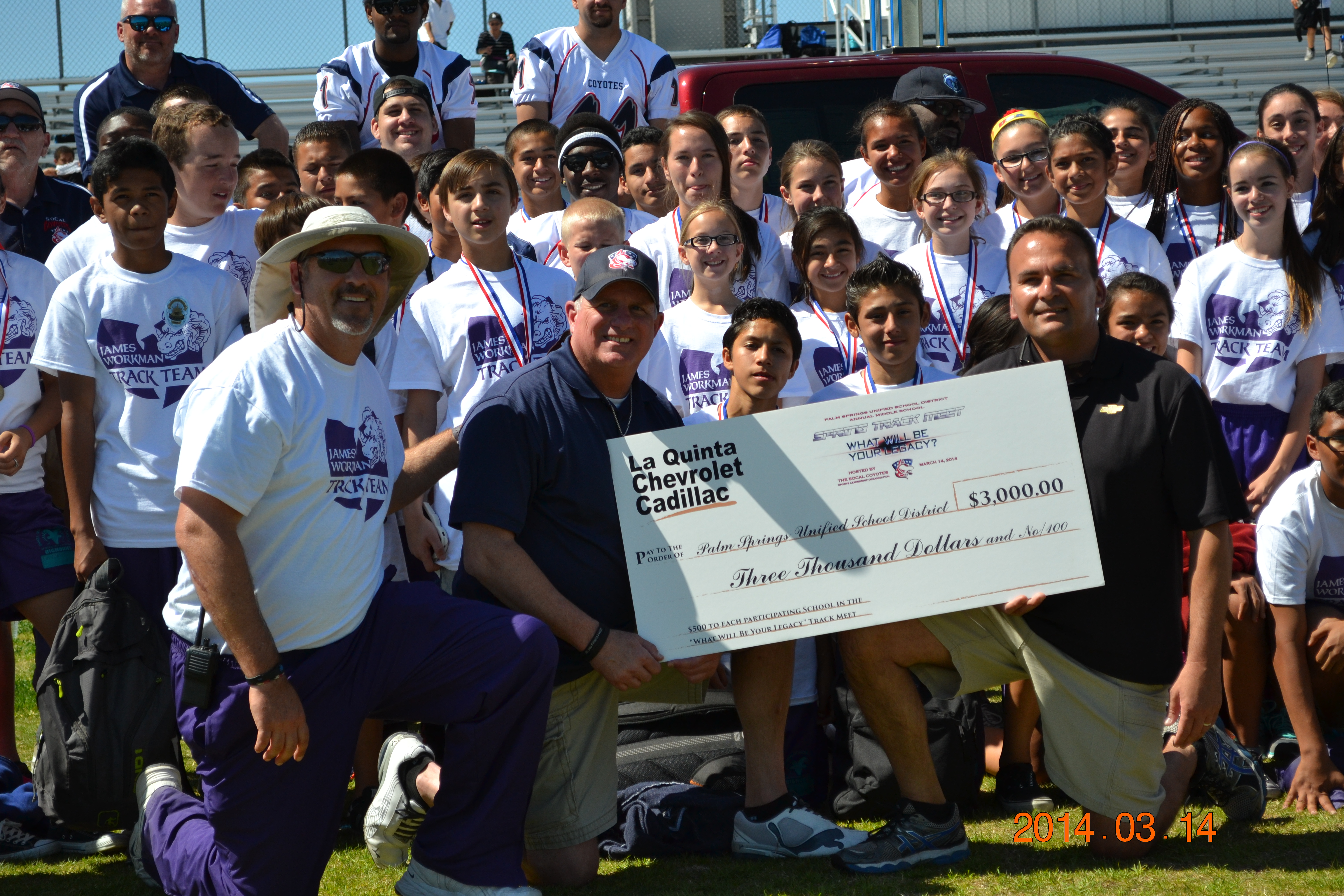 (DESERT HOT SPRINGS) — James Workman Middle School proudly took home the overall first-place trophy after a half-dozen schools put their stars on display in a battle for track-and-field supremacy at the ‘What Will Be Your Legacy?’ Palm Springs Unified School District annual meet.

Perhaps it was no coincidence that the uniforms of the James Workman track team proudly bore the logo of their adopted two-time champion SoCal Coyotes professional football team, hosts of the city-wide event.

From eight a.m. to one p.m., Coyote players, staff and coaches assisted the 11-14 year-old athletes from the moment they stepped off the bus to the staging of each event, ranging from high jumps and hurdles to shot puts, relays and dashes.

And with the help of Chevrolet Cadillac La Quinta and other corporate partners, the SoCal Coyotes are ensured that every school took home a sizable donation from the non-profit organization.

“In order to succeed in life, the desire for success must be greater than the fear of failure,” said Anthony Caridi, general manager of Chevrolet Cadillac La Quinta. “Events like this offer our youth lessons that last a lifetime. They are discovering that it’s hard to beat somebody who never gives up. We are so proud to play a role in delivering that message to the children of Coachella Valley.”

CBS recently reported that taxpayers spend more than $8 billion on high-school dropouts, a fact not lost on the hometown Coyotes.

“Engaging students athletically and academically at this level is paramount to keeping them on the path to a high-school graduation,” said J David Miller, team president and head coach.

“Our football players leap at every opportunity to motivate and encourage our local youth to work hard, stay focused, and stay in school. The Coyotes are thrilled to be first responders in support of our middle schools.”

Jody Diaz, the event organizer and dean of students at Desert Springs Middle School thanked the Coyotes and Chevrolet Cadillac La Quinta “for the effort and resources coming our direction because of their diligence.”

The Coyotes and their partners gave away t-shirts and water bottles,  and distributed leadership packets that include a ‘What Kind of Leader Are YOU?’ questionnaire, with a matrix that asks questions about home, school, work and play.

Sample questions – ‘Do you study before you turn on the TV? Do you pick things up without being told? Do you think of others before you think of yourself?’ — will allow students to ‘grade’ themselves as a leader.

“It’s a true testament to the SoCal Coyotes and their message of helping the community,” added Omar Tinoco, assistant principal at James Workman Middle School. “We are overwhelmed by the support the Coyotes provide.”