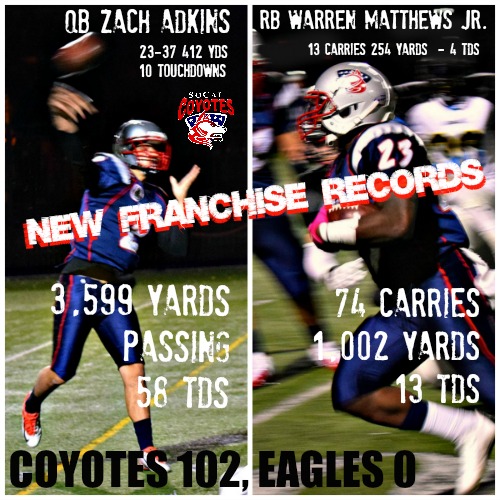 Northwestern (La.) State rookie quarterback Zach Adkins completed 23 of 37 passes to six different receivers for 412 yards and a team record 10 touchdowns as the Coyotes bombed the Chino Eagles 102-0 for their franchise-record 11th-consecutive victory.

The Eagles entered the game hoping for their fifth win to close out the 2015 season, but quickly discovered hope is not a strategy against one of the most talented teams the Coyotes have ever assembled.

The 102 points were the most scored in the Coyotes’ storied seven-season history.

How good is Adkins? In preparation for the playoffs, the Coyotes opened up the Run ‘n’ Shoot playbook, and Adkins put on a target-practice clinic. He threw slants, posts, post-corners, deep outs, hitches, curls. His 3,599 yards on the year breaks the team’s single-season record of 3,466, set by club legend Nate Lewis in 2012.

Running back Warren Matthews Jr. – the 2014 IFL Rookie of the Year – carried 13 times for a Coyotes single-game record 254 yards and four touchdowns. His third-quarter 92-yard touchdown rumble also was a Coyote club record. Matthews’ extraordinary night made him the first 1,000-yard rusher in SoCal Coyotes history, with 1,002 yards, on 74 attempts.

The dominating ‘Darkside Defense’ posted a blinding eight-sack shutout, gave up no first downs except on penalties, and pulled down seven interceptions.

Receivers James Calhoun, Rashad Roberts, William “Billy” Eichman, Stevie Will and Mario Brown all had huge nights, and all but Brown caught touchdowns. Calhoun led all receivers with eight catches for 178 yards and four touchdowns. Roberts had five catches for 112 yards and two scores.

Arizona State defensive end Jake Sheffield, the Coyotes all-time sack leader (34), had a fumble recovery, two tackles for loss, and three sacks, giving him a team-leading 18 on the year, also a Coyote record.

The Coyotes earned a week off before they return to action November 21, in the opening round of the playoffs.

ADKINS PEAKING – Adkins needed 285 yards Saturday night to reach the peak of the Coyotes ‘Mount Everest’ – the single-season passing record of 3,466 yards, set by Lewis, the team’s only quarterback to sign an Arena-1 contract (San Jose Sabercats). Adkins now holds Coyote records for most touchdowns (58); most touchdowns in a game (10); highest completion percentage in a game (78%); most games with five or more touchdowns (5); and the most important of all – fewest interceptions (4). Lewis still holds the record of most yards in a game (574), set in a 50-0 win over the Las Vegas Cobras on May 11, 2012.

MATTHEWS ENTERED THE GAME needing 252 on the ground to break 1,000, and it seemed out of reach until the Coyotes were penalized back to their eight-yard line midway through the third. Adkins fed him the ball on the Coyotes famed ‘Dallas’ draw, and once Matthews exploded through the first wave of defenders, he hit the gas on the near sideline, sprinting the length of the field in what would ultimately rewrite team history.