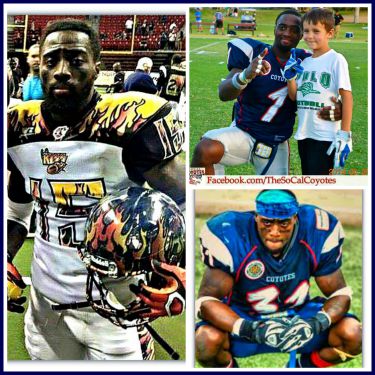 (PHOENIX) — When the resurgent LA KISS battle the Arizona Rattlers today in a Week 18 push for an Arena Football League playoff berth, don’t be surprised if the SoCal Coyotes all-time interception leader Shaine Boyle – now an anchor in the KISS secondary — somehow makes the difference.

Kickoff is set for 3:00 PT today from the U.S. Airways Center in Phoenix, Ariz., and can be seen live on ESPNEWS.

For three seasons with the Coyotes before his AFL opportunity, Boyle was a frequent hero. A man of deep faith, Boyle spoke loudly with his character and play, creating magic with thrilling interceptions, punt or kickoff returns that sealed victories for the Coyotes.

Since earning a KISS roster spot earlier this year, Boyle has become a mainstay in the Los Angeles secondary, and has 19 tackles on the season.

Boyle was a captain and leader of the SoCal Coyotes ‘Darkside Defense’ for three seasons and is still the team’s all-time INT leader (15). His stellar rookie AFL season is no surprise to his Coyote teammates and coaches.

“Shaine is just a great talent, and has an even greater attitude and will to win,” says Coyotes head coach J David Miller. “He is the standard for every defensive back who wears our uniform. He deserves every opportunity he gets.”

One of a number of Coyotes who have now advanced to NFL, CFL and AFL camps, workouts and opportunities, Boyle now starts in a defensive backfield that has a resurgent KISS team chasing an elusive AFL playoff spot.

Boyle joined the Coyotes August 14, 2013, and made the most of his opportunity with America’s #1 Developmental Pro Football Program.

The Faulkner University cornerback – once rated by Scout.com as ‘one of the best top cover-corners in all of Southern California,’ has always made an impact on and off the field, and his tenure with the Coyotes was no exception.

On the field, the star defensive back schooled opposing offenses and Coyote rookies, and off the field, he was a frequent and popular speaker as part of the Coyotes leadership curriculum in middle schools throughout the Coachella Valley.

For Boyle, football hasn’t always been an easy road.

He was out of football until 2010, when he enjoyed a stellar season at College of the Desert. He was given a scholarship to Indiana, but the NCAA ruled that his eligibility had expired.

Finally given a chance, he played his senior year at Faulkner, where he dominated in the toughest NAIA conference in the nation.The rest is history.