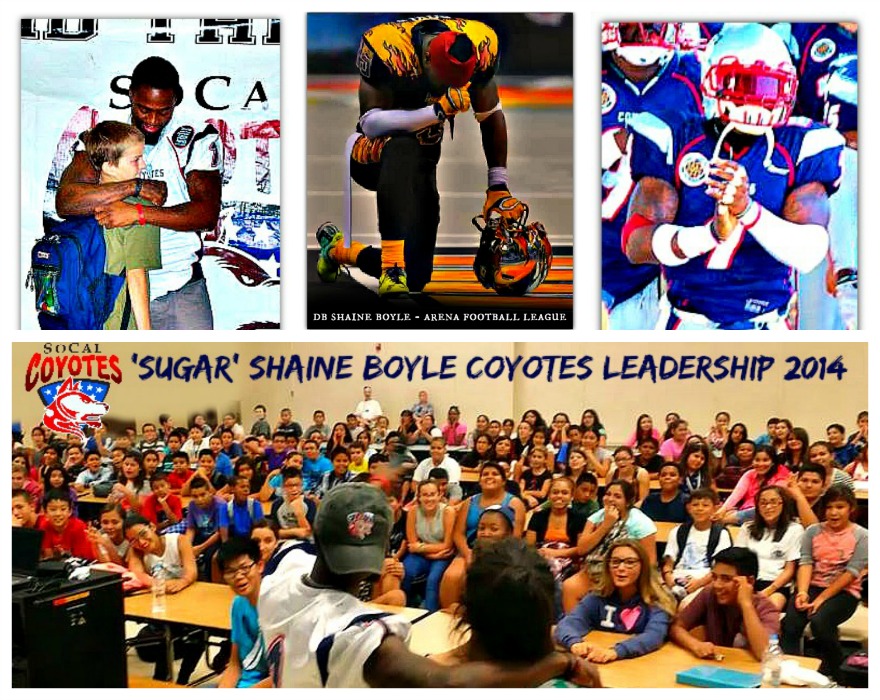 (PALM SPRINGS) – His greatest memory as a SoCal Coyote, says superstar defensive back Shaine Boyle, isn’t his all-time team-leading 15 interceptions, his last-second miracles that produced heart-pounding wins, or even his 10 defensive touchdowns in a single season (2013). 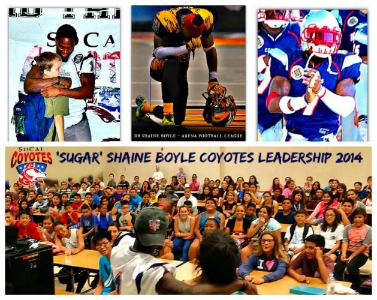 On September 9, 2014, in the midst of a SoCal Coyotes middle-school leadership symposium in Coachella Valley, an 11-year-old boy approached Boyle and asked for help. Bullies, the boy said, were waiting for him in his next-period class.

“I grabbed him, and hugged him real tight,” says Boyle, with a mega-watt grin, “and me and (Coyotes 6-4, 295-pound, University of Miami defensive end) Kelvin Cain walked him to his next class. We took care of those bullies and we dealt with his fears. We talked. I told him – trust me, sometimes, life is deeper, way deeper, than you can see.”

When Boyle – who had a spectacular rookie year last season with the Los Angeles KISS – signed this week with the Cleveland Gladiators to return to the Arena Football League, he fired off a message to his Coyote brothers.

“Once a Coyote,” Boyle says, “always a Coyote. Keep grinding.”

Boyle was out of football until 2010, when he enjoyed a stellar season at College of the Desert. He was given a scholarship to Indiana, but the NCAA ruled that his eligibility had expired. Finally given a chance, he played his senior year at Faulkner, where he dominated in the toughest NAIA conference in the nation.

Despite stellar pro days and workouts, he was ignored by every league. He watched helplessly while friends he trained – such as the ‘Honey Badger’ Tyrann Mathieu – were drafted by the NFL. “I refused to let my light go out,” says Boyle, who lives by unshakable faith. “I told God that if He just cracked the door, I’d run, not walk, through whatever He had for me.”

Soon after, his phone rang. “Coach Miller called me in Louisiana,” Boyle says, “and asked me if I was ready to come to the desert and be a Coyote.”

The proverbial “door” had cracked open, and with his 4.4 speed, Boyle ran through it.

HIS IMPACT WAS SWIFT AND SWEET for the Coyotes, so much so that Coach Miller nicknamed him ‘Sugar Shaine.’ Throughout fall 2013, Boyle was the difference-maker in the Coyotes’ second championship season, winning games with thrilling punt and interception returns for touchdowns.

The Coyotes trailed the unbeaten California Raiders 27-3 when Boyle returned three picks for touchdowns in a stunning 36-33 upset on the road. It was the biggest comeback in AAA history, and the Raiders only loss at home in seven years.

“Man, the memories,” Boyle smiles. “The Coyotes gave me that chance to go out, and show out. Great practices, great games, great competition – every day was one step closer to my dream.”

IN THE MIDDLE SCHOOLS, where the Coyotes teach leadership to thousands of Coachella Valley youth each year, the show-stopping Boyle was a star. Kids flocked to his messages of faith, hope, and redemption, and Boyle’s personality lit up the packed auditoriums.

“When the Coyotes go into the schools, we’re doing something bigger than we’ll ever do on the field,” Boyle says. “That’s what the Coyote program gives you. The Coyotes make you hungry, keep you humble, and make you keep working when nobody’s looking. When you’re in the schools, it’s not about your pride, or your ego. It’s what you give them. Man, I love those kids. Those eyes in those rooms stay with you forever.”

Meanwhile, Boyle’s grind – on and off the field – set standards that remain the ceiling today in the Coyotes program. He personified “Faith, Family, Football.” He pushed his Coyote teammates in practice, in games, in life. His daily texts and social media posts of scripture, and prayer, still draw hundreds of followers.

A recent text – “I am with you and will watch you over you, wherever you go,” writes Boyle, quoting his favorite verse, from Genesis 28:15. “I will not leave you until I have done what I have promised you. I am a winner in God’s eyes. So blessed.”

BOYLE, BETWEEN ARENA SEASONS, rejoined the Coyotes last fall during the ‘Miracle Season’ and their incredible 13-game winning streak, and played in one of the three huge victories over the Inglewood Blackhawks. His effort helped earn the Coyotes a fourth title, his second, and this ring will be special.

“You have to match your passion with purpose,” says Boyle, who cherishes bride Sierra, and is a now a proud father to Shaine Jr., and daughter Shadai. “You can’t let the outsiders judge you. Don’t look at nobody else. Realize every day God is working for you. Make sure your light within you shines brighter. Be the leader, whatever it takes. To wear that Coyote uniform, you’ve got to become not just a better player, but a better man.”

Once a Coyote, always a Coyote, indeed. But as he packs for Cleveland this spring, Boyle makes it clear he wants some company.

“I’m going to give it my all – and show the Arena Football League what we’re all about,” he says. “I want to see my Coyote brothers moving up to the next levels. They are packed with talent. They have what it takes. But can you overcome?

“The biggest grind is in your mind.”

Somewhere, a little boy is watching. One who will never forget the day ‘Sugar’ Shaine Boyle showed up at his school, stepped into his life, battled his bullies and taught him to face fear.

And it’s deeper, way deeper, than anybody can see.