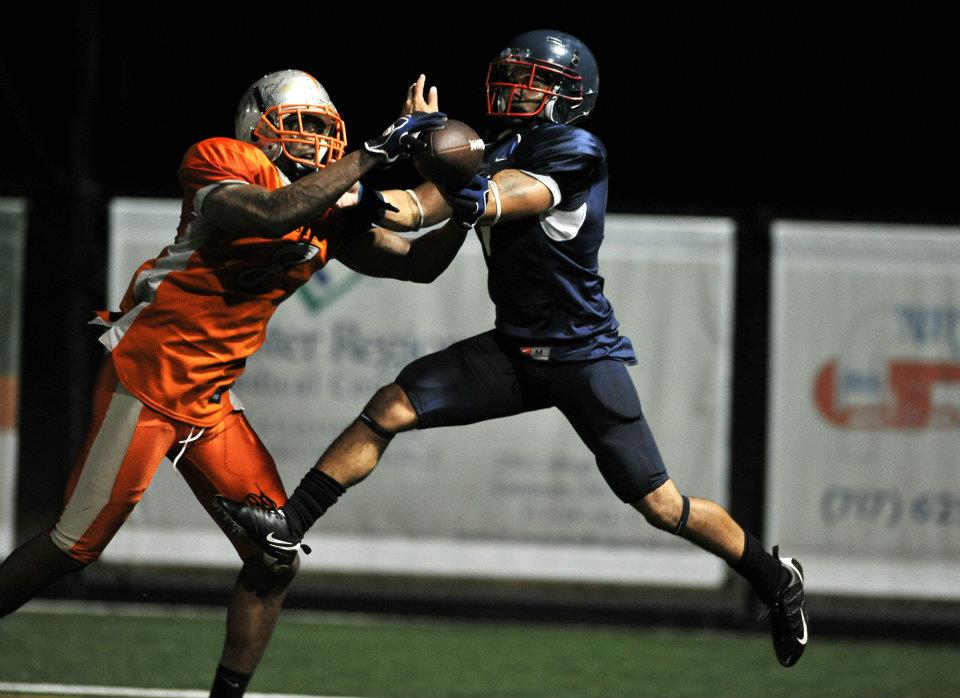 (PALM SPRINGS) – SoCal Coyotes superstar receiver Rashad “The Franchise” Roberts couldn’t hide his giant smile this morning when he got the news that he may no longer be the fastest man on the 2012 Pac West champions.

The Coyotes signing of wide receiver/S-back/kick returner Kevin Page, 5-9, 187, one of the fastest men to ever be timed in the Arena Football League, means that Roberts — who led AAA football this spring with 24 touchdowns — has seen the last of double and triple coverage.

The 24-year-old Page rolled up 1,400 rushing yards and 2,224 all-purpose yards while leading West Virginia’s Glenville State College to a 9-2 record in 2007, which earned him first-team all conference and Offensive Player of the Year.

He played for Doug Kay and the Columbus Destroyers in the Arena Football League, but made a name for himself in NFL circles when he clocked a 4.28 for Tampa Bay Buccaneers assistant coach Mike Sullivan and then did it again for the San Francisco 49ers. He was among the final cuts of both teams.

Chris Jones of the Toronto Argonauts timed him at 4.31. During his most recent tryout, he benched 225 pounds 16 times and had a 3.4 standing vertical jump.

“Those times are not only real, but he ran them for coaches we know and respect,” said Coyotes head coach J. David Miller. “His film was blurry, but Kevin’s so fast the film would be blurry if Steven Spielberg was holding the camera.

“All those 40 times wouldn’t mean much if he can’t play football and doesn’t get in the end zone. But this kid finds the ball and just explodes. He’s a threat to score from anywhere. He can return kicks, he will line up at S and run between the tackles, he can play in the slot or outside at receiver. He’s fearless.”

Page joins a veteran Coyote fleet of Run ‘n’ Shoot receivers, including Roberts, DeMario Brown and Josh ‘The Flyin’ Hawaiian’ Asuncion, and the recently signed Nick Lee, who ran a 10.4 in the 100 meters.

“Pick your poison,” grinned quarterback Nate Lewis, who already throws a touchdown every seven completions. “Coach Miller is stacking the deck. In the Run ‘n’ Shoot, on every snap, we have at least one receiver winning a gold medal up the seam. If a safety flinches, it’s a touchdown. I can’t wait to put it on them.”

“This is Christmas,” said Rashad Roberts. “I’m licking my chops. Nobody can cover me man to man. Now, defenses don’t have a choice.”

The Coyotes and their high-octane Run ‘n’ Shoot offense will open August 24 against San Diego at Xavier College Prep.