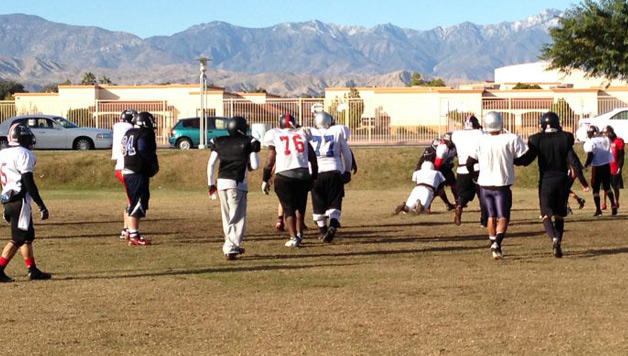 (PALM DESERT) — If the SoCal Coyotes’ collective New Year’s resolution was to be on time and practice with purpose, well, it didn’t take long.

The reigning champions dressed out 41 players on New Year’s Day for their final practice in full pads before they resume the season this Saturday, January 5, at 7 p.m.

Saturday’s game against the Arizona Flying Dutchmen will be historic for the Coyotes, as they play their first regular-season game at Indio’s historic Eldorado Polo Club, in the heart of the Coachella Valley.

The Coyotes are already 1-0 in 2013 play after a stunning 56-8 blowout victory in last month’s Catalina Kickoff Classic.

What caught the eye of head coach J. David Miller wasn’t just the number of players: It was their timeliness. Every Coyote was on the field for team stretch on or before the scheduled start time of 3 p.m. — on a holiday, no less.

“The sign of a great football team is when they start being great at the little things — without being told,” said Miller. “They were on time. They went to work. They were crisp. They policed themselves. There was little talk, all action, and the veterans ran the show. We are a veteran ball-club that is no longer satisfied with being good. We want to be great.”

The Coyotes won the Pac West championship in 2012 and missed the national championship last September 15 by three points.

For information, click “Events” on this Facebook page. For tickets or more details, email [email protected], or call 727.348.6060.