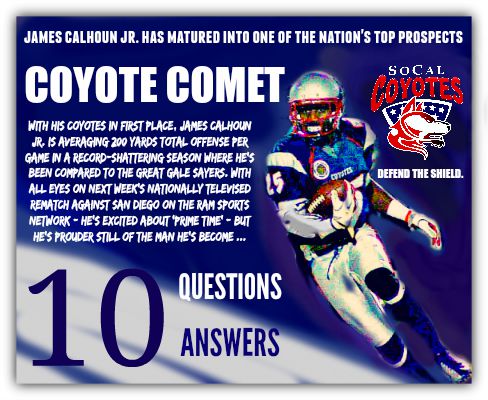 (PALM SPRINGS) – Wow, has James Calhoun Jr., been called a lot of names. The Human Highlight Film. The Human Joystick. The Saturday Silencer. And, of course, the obvious – King James.

Every one of them are feeble attempts by coaches, media, announcers and headline writers to describe the hottest emerging prospect hands-down on the West Coast. Calhoun is now on the verge of shattering every single-season record in the hist

ory of the storied three-time champion SoCal Coyotes franchise, a man running through the competition the way Herschel Walker once did in high school, a man among boys with talent so obvious and immense that everyone – including agents and scouts – who come to witness him for themselves on film or in person end their sentences with “… are you kidding me?”

But who, really, is James Calhoun, Jr., whose laser-timed 4.3 speed has propelled his Coyotes to a six-game win streak and into first place in the league, as high as third in credible national amateur polls? What will the rest of the country discover when the fledgling RAM Sports Network sheds the light of national television – 22 over-the-air stations in major metropolitan U.S. markets, 12 million homes on Roku TV – on the Coyotes’ much-awaited October 3 rematch with the San Diego Stallions at Shadow Hills?

Calhoun is a prankster, a jokester, and loves to laugh. Spend five minutes with him, and you will, too. He still watches cartoons. He is quiet, and if he doesn’t know you, shy. He didn’t play organized sports until high school. Growing up in a home crowded with five sisters and three brothers, he knows the first person to the table is usually the only one who leaves full, and nothing comes easy – so don’t blame him for being a tad superstitious. He works full-time, and devotes his free time as a loving father to his little six-year-old Isaiah.

And he has become the face of the faith-based Coyotes, America’s #1 Developmental Pro Football Program, proof-positive that some of the best prospects in the nation aren’t just the ones who pop up on the NFL Network, or ESPN.

Miracles happen each time he races into the teeth of a defense from his slotback position in the Coyotes’ vaunted Run ‘n’ Shoot ‘Silver Stretch’ attack. “What number 25 does out there just isn’t human,” says San Diego Nighthawks owner Tony Collins, after Calhoun caught a five-yard out, then twisted, cut, spun and turned through every single member of the Nighthawk defense for a 44-yard touchdown that brought comparisons to the legendary Gale Sayers. With an electric running style that showcases remarkable balance, shifts, feints, and unparalleled acceleration, Calhoun, 6-0, 200, is a magician in open space, a lethal dose of desperation to every defense.

How lethal? In the season opener, he put up 171 yards. Fluke? Two games later, 212. Most of his yards are run after the catch. Critics predicted he would thud to earth against the then-undefeated Inglewood Blackhawks, who entered their game against the SoCal Coyotes ranked number-one in the nation in some amateur polls, boasting the nation’s top defense. The Blackhawks left defeated 48-30, after Calhoun hung a career-high 253 yards on what had been the best amateur team in the sport. On the road, no less.

His 917 yards receiving and 14 touchdowns are best in the league – and double that of his next challenger. With five games to play, the single-season Coyotes record of 1,474 yards and 19 touchdowns held by veteran Rashad ‘The Franchise’ Roberts, set in 2012, is in easy reach. With just 83 more yards, he’ll become only the third 1,000-yard receiver in franchise history, behind Roberts and DeMario ‘The President’ Brown. He is a threat to score on jet sweeps, swing passes and as a returner in the kicking game. He is more Houdini than slotback. When he appears trapped by a cluster of defenders, he invariably wriggles out of their reach and escapes, leaving trails of disbelieving players and fans.

“In three seasons, we have watched James grow into a complete player, and a complete man,“ says head coach J David Miller. “If his shot comes with the CFL, NFL or AFL, trust me, they won’t give him back. He’s ready to lead a franchise at the next level.”

Miller has been relentless in challenging Calhoun, demanding far more than just the enormous football talent that God has clearly blessed him with. “Every single person who otherwise would never listen to you,” Miller told him as a rookie, “is now watching you. You must be accountable for your influence. Teammates are feeding off your attitude, good or bad. Scouts are watching your work ethic. Little kids are looking up to you, like it or not. Are you the man who mothers would actually pray that their sons grow up to be?”

According to Miller, the definition of spectacular is consistency, and he tells his players that to shine over time, they must dig deep beyond perception and face reality – the obstacles that typically derail young men. “Perceptions are built by reputation, portrayals, past performances, posturing, posing, ego, all that garbage,” says Coach Miller. “We’re chasing humility, accountability, responsibility, selflessness, attention to detail, respectful communication. We believe you do everything right, from the huddle to your home. Integrity, up front, out in the open. And for players with his skills, that means being incredibly self-disciplined, doing even the smallest things to honor God, proof that you can be trusted with more than just a football.”

In the beginning, it wasn’t easy. “I remember his rookie season,” says defensive end Jake Sheffield. “James had just pin-balled about 75 yards through a defense for a touchdown, and when he got to the sideline, Coach didn’t congratulate him – he told him to tuck in his jersey, that little boys were watching him. James shook his head. The veterans smiled, because we get it. That’s Coach’s way of keeping us humble. If God can’t trust us with the little things, He can’t trust us with the big things.”

Fast forward three seasons, and judging by all the tucked-in jerseys, frequent smiles and sweaty hugs on the Coyote sidelines, there’s no mistaking the love and respect that Coach Miller – and the rest of the Coyotes organization – have for their shooting star.

This season, no question, everybody wearing the century silver and navy blue is having an absolute blast. Frequently, Miller now calls on Calhoun to lead the Coyotes in pre-game prayer. After kickoff, though, the prayers – and swears – usually come from the opposing sideline, where only divine intervention can stop this Coyote Comet.

Coyote Comet? Good grief. How many names can one man have? For James Calhoun, Coach Miller suggests you add one, maybe two, more.

OPPONENTS CAN’T CORNER JAMES CALHOUN, JR. – BUT WE DID. HERE’S 10 QUESTIONS YOU WANTED TO KNOW –

Q. What has the Coyote program meant to you?
A. The Coyotes are a family to me because on or off the field, we’re a group of guys who would do anything for each other. This program has made me more open-minded and vocally supportive as a Coyote, as well as in my everyday life.

Q. If you could have one do-over in your life, what would it be?
A. I wouldn’t do-over anything in my life. Everything I’ve done or been through has been a life lesson, and made me who I am, and got me where I am today.

Q. Your love for your son Isaiah is evident in everything you do. How do you describe a father?
A. A father is a teacher, a counselor, a role model, a tour guide through life. A man who extends his hands and time to help raise a child and gives his heart and love to the child. I want my son to think of a great father when he thinks of me. An example of how to be a man.

Q. The Coyotes talk a lot about ‘Defending the Shield’ of faith, family and football. What do you think of when you ‘Defend the Shield’?
A. Defend the Shield to me means to fight for something you believe in. My favorite scripture is Psalm 16:8 – ‘I have set the Lord before me continually; because He is at my right hand, I shall not be moved.’ This is my favorite scripture, because I know that if I keep God first, He’s always got my back.

Q. What will be your legacy?
A. I want to be remembered as someone who always set the bar and didn’t let anyone stop me or get in my way. The passion I have for football can be seen from the moment I put my cleats on and step out on that field to play. Even on the sidelines as a cheerleader you’re going to see what James Calhoun is about. Faith, family, football. You never heard of football? You don’t like football? You don’t watch football? Prepare to become a fan!