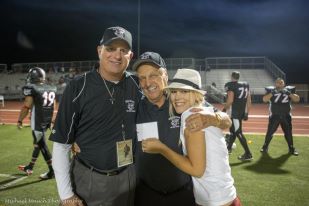 (PALM SPRINGS) — “Your efforts are noble. But minor-league football always has, and always will be, poor-man’s football and full of crap.” — An email from another coach to the Coyotes, December 10, 2012

Before any culture can rise from the sewer, everyone involved has to be sick of the smell.

About a decade ago, New York Police Commissioner Bill Bratton made his staff ride the subways at midnight to make them understand why it was called ‘The Electric Sewer.” Before they could affect change, they had to understand why change was so desperately needed, and after a few whiffs, they got the point.

So, too, the long-term attack for the SoCal Coyote organization to set industry standards in AAA football.

Creating, communicating and implementing the right team culture is the biggest catalyst to lasting success in any organization, something we realized would be necessary for the SoCal Coyotes to sustain long-term AAA growth and excellence.  We strongly believe that culture precedes positive results — and it can’t just be tacked on as an afterthought on the way to the winner’s circle.

Champions behave like champions,  long before they’re champions. Winners have a standard of performance, regardless of the score.

We knew change wouldn’t come easy. In the crazy world of minor-league football, where schedules, teams, rosters and rankings fluctuate faster than Don King changes champions, it seemed like an insurmountable challenge. But we believe that a journey of a million miles begins with the first step, and that if we stepped forward, others would, too.

The Coyotes dropped into AAA football like an Alka- Seltzer, bubbling with an energy and determination to make a difference, on and off the field, in the community, in the workforce, and in the very lives and homes of our players.

Are we perfect? Not even close. We don’t care if you came from prison or the pulpit — we’re just trying to get better, every day. The windshield is always bigger than the rear-view mirror. If our choices are to make excuses for failure or do something about it, we unashamedly choose the latter.

“You act like you’re better than everyone else. We’ve been doing this for years. You guys think you can do this alone?” — an email from another owner to the Coyotes, January 12, 2013

It took one amateur guy with a powerful belief system and vision to build the Ark.  On the other hand, a bunch of professional geniuses built the Titanic.  With the Coyotes, we’re always looking for that one guy with belief and vision — players who are positive, consistent and display high standards of work ethic, professional communication, and personal character.

Likewise, we seek to eliminate the geniuses and potential trouble sources who clump together with toxic thinking and negative attitudes. We inherit a lot of players who have never experienced success before, and transforming their losing mentality to that of a day-to-day champion requires a totally different culture and guys who have the strength to stand for what is right.

We believe you can’t coach class. It has to start with the man in the mirror. Character is who you are when no one’s looking.

The most pressing job of our organization is to expect this culture by communicating, teaching, rewarding, and enforcing the standards of the Coyote program. This includes how our athletes practice, compete, win, lose, lead, and conduct themselves on and off the playing field.  Like the old joke about the guy who told his doctor, “I broke my arm in two places.” The doctor said, “Stay out of those places.” That’s the advice we give our players — stay out of those places.

Instilling the right culture always takes time.  Inevitably, we have those who rail against discipline and higher standards.  But leaders continue to emerge; guys with the courage to confront, and even remove, the dissenters from the program, even though they might be highly talented.  Over the long haul, we believe that the Coyote culture will continue to attract, support, and retain the right talent and people, which will help us prevail and succeed.

We realize that the harder you try to do things right, the more your critics hate you. Hatred is something peculiar: You always seem to find it strongest and most violent where there is the lowest degree of culture. But hate, just like crap, is nothing but fertilizer if you’re growing something good.

2. The Speed of the Leader Determines the Pace of the Pack

I’ve been blessed with great mentors, and I’ve taken a page or two from each of them. If they all agree on one thing, it’s that the leader has to set the pace. June Jones taught me to get up at 3 a.m. and be in to work no later than 4 — and how effective you can be before the demands of daylight kick in. He’s never worn a watch, but he’s never been late for a meeting. Hank Stram would lock the door if you were late for a meeting — even if you were the only guy coming to see him.

Mouse Davis preaches that you are only late “for people you don’t respect.” Tim Marcum, in Tampa Bay, would shut the doors to the team charter bus to the airport if you were a second late — even if he could still see you through the glass. If you missed the team flight, you didn’t play, no matter how you got there, who you were or what position you played.

Jerry Glanville didn’t think much of players who didn’t play 100 miles per hour. If you didn’t play hurt, he called you ‘Lassie,’ and would leave a bag of dogfood in your locker — just in case you didn’t get the point.

Bottom line? “If the guy at the top doesn’t care about every detail on a football team,” says Jones, “then why should anybody else, especially the people buying tickets?”

Agreed. We expect our athletes to model the kind of passion, commitment, and work ethic necessary to be successful, which means everyone of us at the top of the organization must demonstrate it in everything we do.

For me, the starting point – before strategy, tactics, theories, managing, organizing, philosophy, methodology, talent, or experience – is tireless energy, enthusiasm and work ethic. Without significant magnitude in those areas, you’re dead in the water. We know the example we set in those categories is what others in the organization recognize as the standard they need to match.  If there is such a thing as a trickle-down effect, that’s it. When your staff and your players see your devotion to work, it runs right on through the organization.

You simply can’t drive a program without an indomitable passion, and that makes it contagious for all involved.

3. We Develop and Empower Our Locker Room Leaders

The work ethic and leadership of members of the organization alone won’t transform a team, which is why we build leaders in the locker room and demand that our players police themselves.  The Coyotes have a core group of respected team leaders who help us create, reinforce, and enforce the culture of our team.

Organizations have leaders within, not just one. It’s these ‘interior’  leaders — the Rashad Roberts, Kyle Moores, David Cathcarts, Bo Bovains, Jordan Cornells, Josh Asuncions, Brian Gollnicks, Devion Browns, Cyle Tisdales to name only a few — who make possible what the guy in charge is trying to accomplish. In football they’re called locker-room leaders, and ultimately they play a major role in creating the culture of the team, instilling a positive mindset.

Everybody has your proverbial back — but you’ve got to figure out who’s protecting it, and who’s trying to put a knife in it.  We believe strongly in parting ways with every person who sabotages or undermines the culture.

We love building relationships of trust with our players, and giving them the keys to the car.

4. Competitors in the Culture Find a Way to Win

Last year, we watched Nate Lewis come of age as a quarterback, calling his own plays and leading critical drives in pivotal games en route to a Pac West championship. But it didn’t happen overnight. Lewis started 2012 as the number-two quarterback, but his relentless work ethic, film study and extra reps pushed him to the top of the depth chart and beyond.

We place a premium on those who exhibit great desire to keep pushing themselves to higher and higher performance and production levels, who seek to go beyond club standards. The player who gets to work early, stays late, fights through injury, illness and personal problems is the one we keep our eye on for greater and greater responsibilities.

Nate Lewis was only one player who seized the mantle of leadership. The Coyotes finished with 11 All-Americans, and this year we’ve already had new faces emerge everywhere. When Lewis left to join the San Jose Sabercats, Mondo Delgado Jr. proved the ‘system’ was no fluke, passing for four touchdowns and 201 yards, and rushing for 116, in his first game.

5. Everyone is Accountable for Both Victory and Defeat

“That was a team victory. Everybody played a role. That was pretty special.’ — A text from defensive end Jordan Cornell, February 10, 2013, after a 28-13 victory

Unlike many of today’s professional sports teams — where the focus is almost solely on a limited number of prima-donna individuals — the Coyotes continually emphasize a team approach.  We want everyone in the Coyote organization, from star quarterbacks to office secretaries, to feel they are responsible and accountable for the team’s success.

Victory is produced by all and belongs to all. Winning last year’s championship resulted from the whole team not only doing their individual jobs, but also perceiving that those jobs contributed to overall success.  The Pac West trophy doesn’t belong just to Nate Lewis or Bo Bovain, it belongs just as much to Daylen Valasquez, our ‘waterboy’ and sideline manager. It belongs to all of us. The offensive team is not a country unto itself, nor is the defensive team or the special teams, staff, coaches, or anyone else separate from the fate of the organization.

The Coyotes are united and fight as one — we win or lose as one.  Often it’s very easy for certain segments of the team to blame others.  When things go wrong with other teams, we see the offense blame the defense, the veterans blame the rookies — everyone tries to point the finger anywhere except themselves.

We don’t believe in scapegoats here. That divides and destroys teams.

The Coyote culture — a commitment to excellence — demands that everyone do their job, with unwavering support for every segment of the team. We believe that you ‘Begin with the End in Mind,’ which means to begin each day, task, or project with a clear vision of your desired direction and destination, and then continue by flexing your proactive muscles to make things happen.

It sure beats living in the sewer, or getting used to the smell.