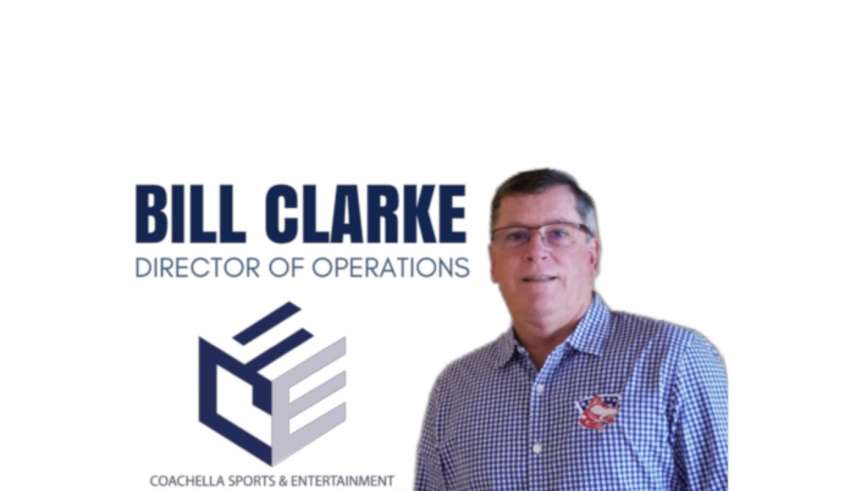 Clarke, 64, brings nearly four decades of industry experience to CSESA and its planned 588-acre development, The Shield at 1 Coyote Way. He is also expected to have a significant influence on The SoCal Coyotes non-profit leadership organization, and Developmental Football International (DFI), CSESA partners and subsidiaries.

“Bill Clarke is the Herschel Walker of stadium operations,” Miller said. “Overnight, he multiplies our franchise value. This is a man with unimpeachable character and a wealth of wisdom. We’re not shy in our belief that our addition of Bill Clarke makes CSESA, and The Shield at 1 Coyote Way, a world-class contender.”

A native of San Francisco, Clarke’s reputation – both national, and international – is synonymous with the meteoric rise of the Indian Wells Tennis Garden (IWTG) on the world stage.

“CSESA and the (non-profit) SoCal Coyotes organization have provided me the opportunity to work with an unbelievable, dedicated, hard-working team,  who hold strong to their faith in God, family, and our remarkably diverse community,” Clarke said.

Clarke managed three annual budgets, combining to over $13 million. He worked through IWTG owner Larry Ellison’s representative to oversee new construction and renovations of multiple stadiums and site-wide improvements over an 18-year period.

Widely recognized for his buttoned-up coordination of staff and event logistics for the BNP Paribas Open, Clarke managed the fifth-largest professional (men’s and women’s) tennis tournament in the world, which annually averaged nearly a half-million attendees.

“Bill is a visionary leader, who possesses the passion, knowledge and work ethic that our winning culture demands,” said Miller. “The Shield at 1 Coyote Way is arguably the most ambitious project in Coachella Valley history, and requires a steady hand on the helm from a leader like Bill.”

Clarke facilitated an array of special events at the Tennis Garden,  such as NBA preseason games and numerous live concerts, including Tom Petty, Pavarotti, The Eagles and more.

His prior stops included six years as Box Office Manager for PM Sports Management, and 10 years over two stops with Landmark Land Company.

Clarke earned an administration degree at California State University at Chico in 1983. Happily married to bride Suzanne for 33 years, they are proud parents of  five adult children, and three grandchildren.

“I welcome this chance to bring experience and knowledge to CSESA, the Coyotes, and The Shield,” Clarke said. “It’s my purpose to pass on these life lessons of Loyalty, Honesty and Respect – to all whom we come in contact with … just as I have taught my five children to embrace and utilize these gifts throughout their lifetimes.”

Miller admitted surprise that Clarke was even available.

“A one-eyed sloth could recognize the enormous value Bill brought to the Tennis Garden,” he added. “We were willing to search the nation to find someone with his pedigree.

“We are blessed beyond measure to be in the unique position to make our CSESA family the last stop in Bill Clarke’s remarkable career.”