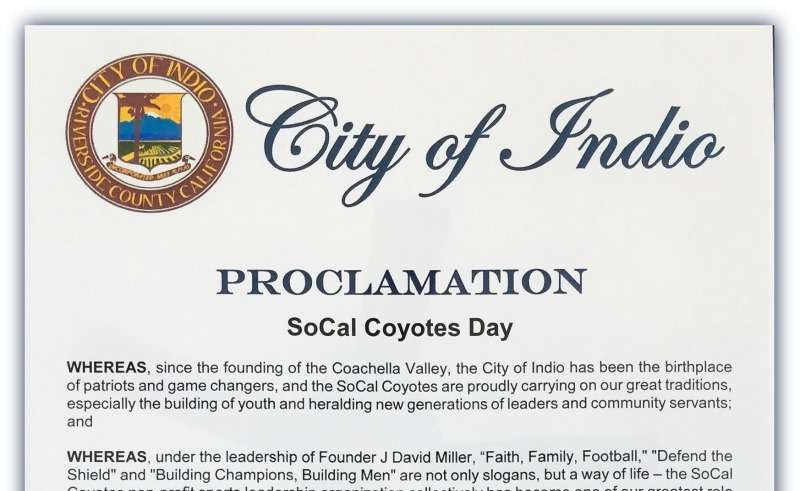 (INDIO) – Prominent Indio City Councilman Glenn Miller and The City of Indio have formally declared September 2 as ‘SoCal Coyotes Day,’ in honor of America’s #1 Developmental Football Program™, according to a Proclamation set forth today.

The Proclamation states that “Faith, Family, Football,” “Defend the Shield” and “Building Champions, Building Men” are not only slogans, but “a way of life” for the Coyotes, and calls the non-profit sports leadership organization “one of our greatest role models for our youth, from Indio to Greater Palm Springs, and everywhere in between.”

The Proclamation can be read in its entirety, below.

September 2 is the Shadow Hills home opener for the Coyotes, who kick off their commemorative 10th season against the California Sharks in World Developmental Football League action. The Coyotes anchor the WDFL’s Pacific Coast Division.

Start time is 1 p.m. Coyote football is always broadcast live on ESPN 103.9 FM, and streamed live around the globe.

Glenn Miller is a well-known community leader and businessman who has called the desert home for over 30 years. In addition to his duties as a former Mayor of Indio and current City Councilman, he is also the District Director for California State Senator Jeff Stone for the 28th Senate District.

Both Councilman Miller and Senator Stone have been major supporters of the SoCal Coyotes program since its inception, and the organization’s efforts to develop The Shield at One Coyote Way, a proposed multi-use sports and entertainment complex proposed for the City of Indio.

For the past eight years on the City of Indio Council, Councilman Miller has donated back his entire City Council salary to various charitable and civic organizations throughout the Coachella Valley.

WHEREAS Since the founding of the Coachella Valley, The City of Indio has been the birthplace of patriots and game changers, and the SoCal Coyotes are proudly carrying on our great traditions, especially the building of youth and heralding new generations of leaders and community servants; and

WHEREAS Under the leadership of Founder J David Miller, “Faith, Family, Football,” “Defend the Shield” and “Building Champions, Building Men” are not only slogans, but a way of life – the SoCal Coyotes non-profit sports leadership organization collectively has become one of our greatest role models for our youth, from Indio to Greater Palm Springs, and everywhere in between; and 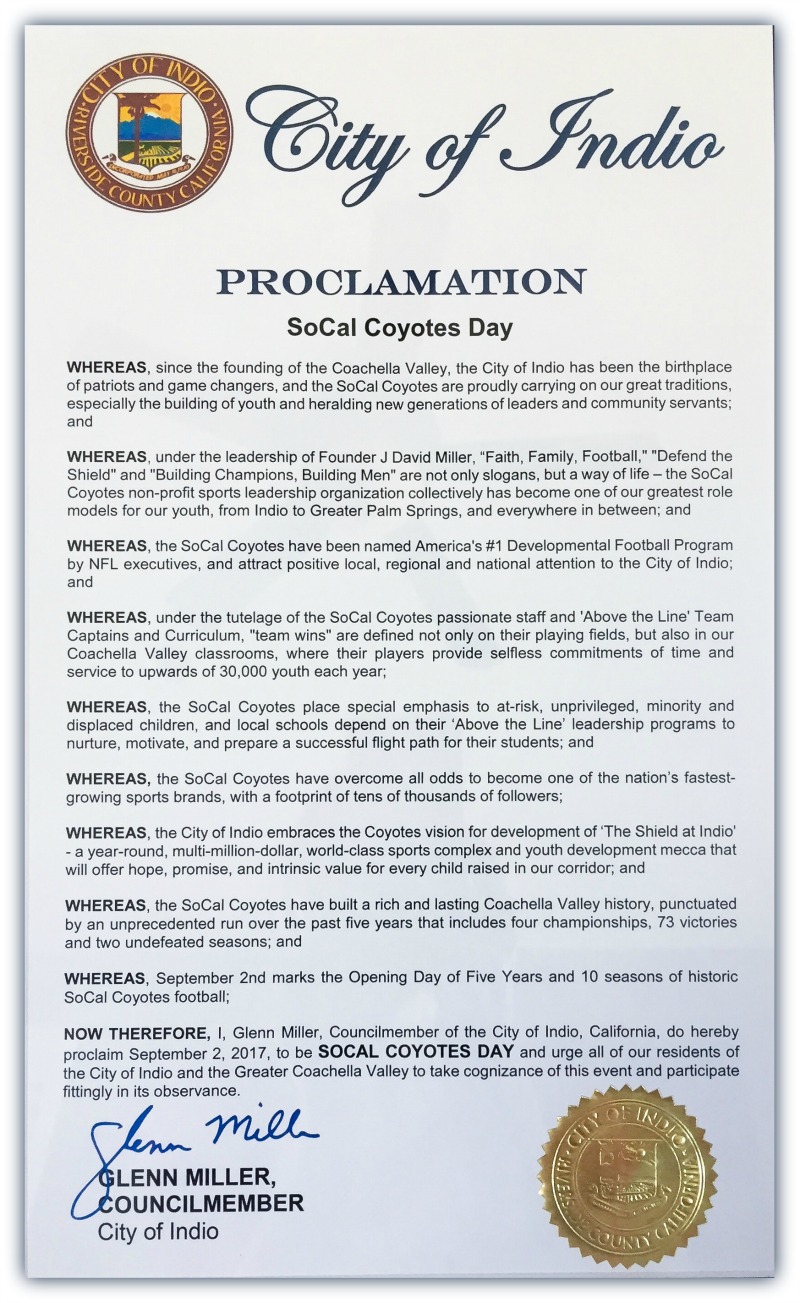 WHEREAS The SoCal Coyotes have been named America’s #1 Developmental Football Program by NFL executives, and attract positive local, regional and national attention to the City of Indio; and

WHEREAS Under the tutelage of The SoCal Coyotes passionate staff and ‘Above the Line’ Team Captains and Curriculum, “team wins” are defined not only on their playing fields, but also in our Coachella Valley classrooms, where their players provide selfless commitments of time and service to upwards of 30,000 youth each year;

WHEREAS The SoCal Coyotes place special emphasis to at-risk, unprivileged, minority and displaced children, and local schools depend on their ‘Above the Line’ leadership programs to nurture, motivate, and prepare a successful flight path for their students; and

WHEREAS, Across the desert, Riverside County law enforcement agencies, school districts, non-profits and civic organizations all benefit from a myriad of Coyote programs, clinics, symposiums and community development; and

WHEREAS The SoCal Coyotes have overcome all odds to become one of the nation’s fastest-growing sports brands, with a footprint of tens of thousands of followers;

WHEREAS The City of Indio embraces the Coyotes vision for development of ‘The Shield at Indio’ – a year-round, multi-million-dollar, world-class sports complex and youth development mecca that will offer hope, promise, and intrinsic value for every child raised in our corridor; and

WHEREAS The SoCal Coyotes have built a rich and lasting Coachella Valley history, punctuated by an unprecedented run over the past five years that includes four championships, 73 victories and two undefeated seasons; and

WHEREAS September 2 marks the Opening Day of Five Years and 10 seasons of historic SoCal Coyotes football;

Now, Therefore, I, Glenn Miller, Councilman of the City of Indio, do hereby proclaim September 2, 2017, to be,

And urge all the citizens of The City of Indio and The Greater Coachella Valley to take cognizance of this event and participate fittingly in its observance.