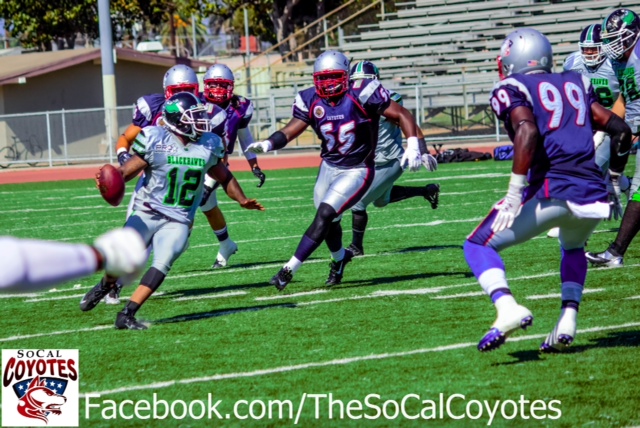 Brooks, who was sacked four times, stepped fearlessly into the teeth of a ferocious Coyote defense to complete 19 of 35 passes for 317 yards and four touchdowns to give Inglewood a thrilling 38-24 victory.

The game lived up to its billing of ‘The War by the Shore,’ as the Blackhawks moved to 2-0 in LaBelle Community Football League play and 8-0 overall on the year.

The Coyotes, who held the Blackhawks to minus-7 yards rushing on 21 attempts, fell to 1-1 in the LCFL. It was the Coyotes first loss of the 2014 calendar year after three straight wins, including two non-league victories in May.

“They made those four or five huge plays. You can’t come into Inglewood and expect to win unless you play mistake-free football and capitalize on every single opportunity.

“Brooks is an outstanding leader, and they’re a very sound, fundamental football team. Much respect to (owner) Tony Reid and his great organization. I’m sure we’ll see them again later in the year.”

While Brooks was spectacular, don’t overlook the Blackhawk defense.

Coyote quarterback Nate Lewis had his toughest day as a pro, completing 17 of 36 for just 125 yards, no touchdowns, and one interception on the game’s final play.

Lewis entered the game needing just 98 yards to break 10,000, but reaching 10,027 was little consolation to the record-setting passer, who was pressured most of the afternoon.

Inglewood drew first blood on an 18-yard touchdown from Brooks, which the Coyotes answered with a 93-yard kickoff return by ‘Sugar’ Shaine Boyle. Another Brooks-engineered touchdown made it 14-7, and the Blackhawks pinned the Coyotes deep on their own one-yard line on the next possession.

Lewis led the Coyotes on a 99-yard touchdown drive – longest in franchise history – that was capped by Andre Hunt’s eight-yard run, which tied the game at 14-14. On the ensuing kickoff, Michael Bovain forced a Blackhawks fumble, and linebacker Kelvin Cain scooped and scored to give the Coyotes a 21-14 lead.

But Brooks was relentless. The Norfolk State veteran quarterback scrambled out of the pocket and found receivers for first downs, and eventually, touchdowns, to give the Blackhawks a 28-21 halftime lead.

The Coyotes tirelessly chased Brooks in the second half, but he extended plays with his legs, kept drives alive, and threw his fourth touchdown to make it 35-21.

The teams swapped field goals to end the game 38-24.

NEXT UP FOR THE COYOTES is the SoCal Steelers, in Long Beach, California. Kickoff is 3 p.m.

TO VIEW ALL OF THE NUMBERS and scoring recaps from Saturday’s game, download the free SoCal Coyotes ‘YAPP’, available free in iTunes or Android Market by searching ‘SoCal Coyotes.’ Click ‘Stats,’ go to Games, then click ‘Box Score’ under the SoCal Coyotes – Inglewood Blackhawks.

GoMobile provides exceptional technology, design, and support for any size business that needs to compete in today’s new mobile economy.