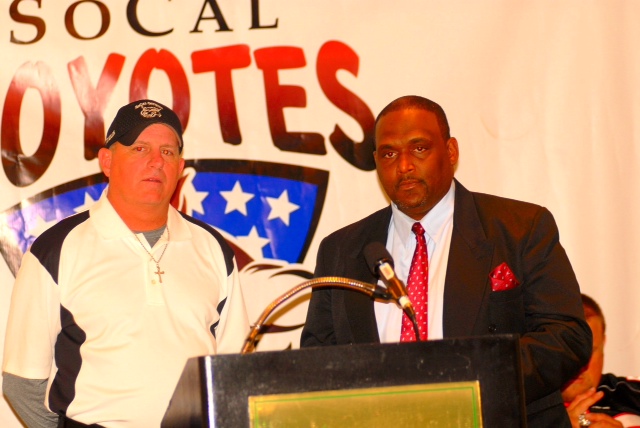 (CATHEDRAL CITY) – It was history-making and record-breaking.

In a stunning, bombshell announcement, the SoCal Coyotes officially moved to a fall schedule when they inked their paperwork to become the 20th team in the Southern California Football Alliance (SCFA), joining established veteran teams like the Inglewood Blackhawks and California Raiders.

The Coyotes were unanimously approved to join the history-making SCFA, the only means to compete for a true fall championship among legitimate California teams.

At a press conference Sunday afternoon at the Doral Resort/Desert Princess Golf and Country Club, the team declared it would play its third season – and record-setting second in one calendar year – as a member of the UFAL Eastern Division. The Coyotes released their fall schedule, which includes other well-known franchises such as the Falcons, Gladiators, Lions, Outlaws, Raiders, Redskins, Spartans, Thunder and Tide.

The Labelle Football League is an independent league of the SCFA, which consists of the historic Blackhawks, Bombers, Cobras, Eagles, Lions, Meerkats, Predators, Silverbacks, Stallions and Steelers. The Blackhawks are also currently the reigning fall national champions.

“We are excited to add a team with the class, integrity and professionalism of the SoCal Coyotes non-profit organization,” said Dwaine Radden, Eastern commissioner of the Southern California Football Alliance, founder of the UFAL, and head coach of the California Raiders, the 2012 UFAL Champions.

“We did our due diligence. The Coyotes have an impeccable track record of excellence, and their organization meets or exceeds our requirements to be a part of one of the nation’s most prestigious and competitive leagues. If a player or team from the desert wants a shot at a fall Southern California title or a national title, it will have to be the Coyotes, and the road to the championship only runs through the SCFA.”

Radden and Coyote president and head coach J. David Miller signed the agreement under the snarling Coyote banner of “Defend the Shield.” Earlier in the day, Radden toured the Coyote corporate offices, met team coaches, officers, board members and medical staff, saw blueprints of the team’s new facilities and stadium, and huddled with Miller and other league officials.

“We want to compete at the highest level, and play the very best teams,” said Miller, whose Coyotes are currently 9-2, and finishing their spring season in the playoffs of the Wild West Football League. “This move guarantees us both. This is the logical next step in our five-year business plan. We want to be the best team, the best franchise and the best non-profit football opportunity in the nation.”

In 2012, the Coyotes became the first expansion team to win a Pac West title. In 2013, the Coyotes have the opportunity for back-to-back titles in two different leagues if they win their next two games in the WWFL.

“The Coyote organization is vividly aware that they now face a dramatic increase in competition and business challenges,” Radden said. “But they are financially and professionally prepared for the long haul, which was a major factor in our selection process.”

When asked how competitive his team would be in their first season against such storied competition, Miller smiled. “To be the best, you have to play the best, and find a way to improve and beat the very best,” he said.

“We told our players this week in practice that they can use their last two games in the WWFL as motivation to show their new brothers, partners and competition throughout the SCFA that they made a good decision in stepping us up to the next level,” Miller said.

Both Coach Miller and Coach Radden are 2013 first-selection Hall of Fame inductees.

“Both of these men exemplify the very best that AAA football has to offer,” said legendary minor-league football czar Dick Suess, founding member of the Hall of the Fame and the Minor League Football News.  “This is a huge step forward for the SCFA and every team involved, especially the best players in the desert who want to compete at the highest level.”

Suess also confirmed that the Coyotes and the Greater Palm Springs area will host the 2014 Hall of Fame game and banquet in January.

“This is a great day for AAA football in Coachella Valley,” Suess said. “Hats off to the Coyotes. They earned it.”