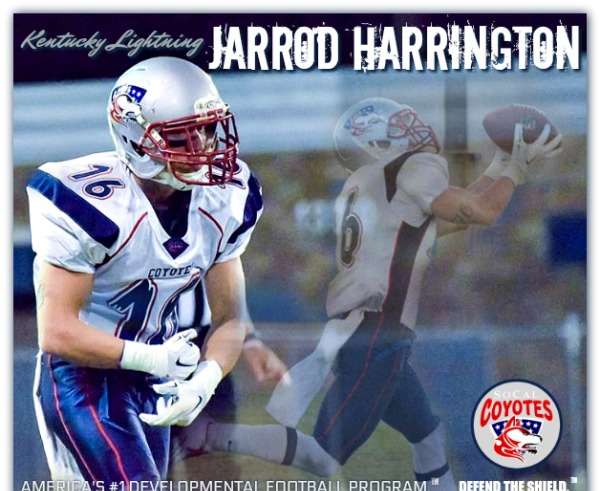 More than a third of the 2017 Coyotes 35-man roster have advanced to professional opportunities.

Over two seasons, Harrington, 5-8, 190, never lost a game as a Coyote. In 2016, the two-time collegiate All-American led SoCal in receptions (35), yards (620), touchdowns (15), and return yards (324).  In 2017, he impressed scouts again by playing receiver, slotback, returner and quarterback en route to another perfect Coyote season.

Harrington starred at Campbellsville University, where he played 42 games in his career, amassed 4,450 career all-purpose yards, and was #1 in the country in 2015 with 1,993 total yards. A two-time All-American (2014-15) and All-Mid-South Conference performer, Harrington owns Campbellsville records for single-game all-purpose yards (375); single-game receptions (14); and career receptions (192).

Harrington attended Boyle County High School in Danville, Kentucky, where he twice led the Rebels to the Class 4-A state championship and a 30-0 record over two seasons. He was a first-team, all-conference corner, and played in the classic prep Kentucky v. Tennessee All-Star game, where he earned Defensive Player of the Game.