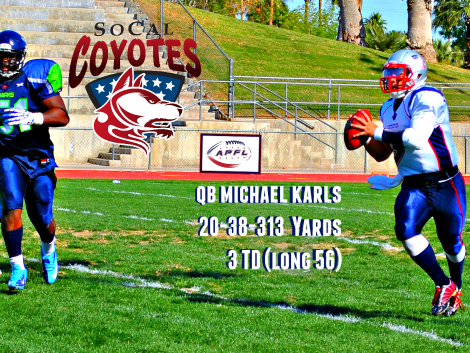 Eichman did, in fact, haul in seven ‘gift-wrapped’ catches for a whopping 138 yards and two touchdowns, including a long of 56 yards.

But the California Sharks – who valiantly battled to the game’s final minute – left the field shaking their heads at the resolve and resourcefulness of Coyotes quarterback and escape artist Michael Karls.

Karls scrambled for critical first downs. He moved in and out of the pocket. He stepped up in the teeth of a ferocious Sharks pass rush. He threw darts for first downs. He improvised and capitalized, and in the end, left the Sharks – who still sacked him three times and chased him all afternoon – utterly exhausted and frustrated.

That’s how Karls earned the SoCal Coyotes ‘Player of the Game’ honors, completing 20 of 38 passes for 313 yards and three touchdowns. It was Karls ninth consecutive 300-yard game, dating back to his second start as a Coyote last season on October 4, 2014.

Karls was the only APFL quarterback to top 300 yards – and now sits atop the league’s best gunners, with three weeks left in the showcase spring season.

The APFL ‘Builds Champions by Building Men’ through employment and leadership opportunities, challenging its players to ‘Be Paid, Be Insured, Be Discovered – and Be a Man.’