Home Coyote Spotlight AFTER SUCCESSFUL BACK, KNEE SURGERIES, COACH MILLER TO RETURN IN 2023 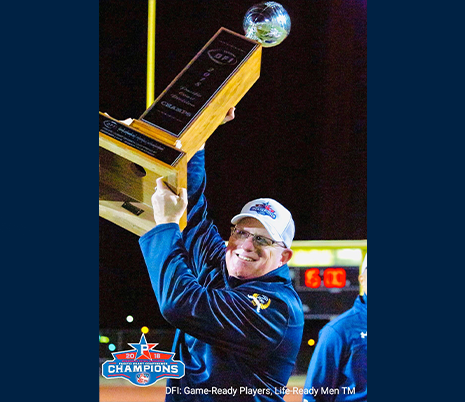 (PALM SPRINGS) – Laurie Beth Miller – wife of SoCal Coyotes Hall of Fame head coach J David Miller – thought she had her husband all settled in on Friday, June 10, barely a week after his knee replacement surgery – and his second major surgery in 120 days.

She ran out to run a few errands while the Coach dozed in his recliner, all hooked up to his ice machine – which had been his saving grace through his second major back-fusion surgery in February, the 2022 season, and then his knee replacement surgery.

She admits now that she thought wrong.

‘Miss Laurie’ – as the Coyotes’ six-time championship coach fondly refers to his wife of 17 years – returned home only to find, to her horror, Coach Miller in the driveway.

“What are you doing out here?” she asked.

Coach Miller shrugged. “You left me all alone – there’s nothing to do,” he said. “I heard the garbage trucks, so I’m bringing the cans back up to the garage.”

“You’re not supposed to do anything!” Miss Laurie shot back. “Get back to your chair!”

Welcome to the world of Coach Miller the patient, where getting the hard-charging coach to sit back and relax took a toll on his wife, family and staff.

“These weren’t just his surgeries,” Miss Laurie said, “They were all of ours. Everybody stepped up.”

But don’t dare say the word ‘retire’ to the man who is a doting husband and proud father of four adult daughters, best-selling author of 14 books, founder of the Coyotes non-profit, Chairman of Coachella Sports & Entertainment Stadium Authority (CSESA) – and as head coach, has led the Coyotes to more than a hundred wins, 10 title appearances, and six championships in the past decade.

Coach Miller has made it clear he will be the Coyotes head coach again in 2023.

The 58-year-old Miller doesn’t do well with idle time. In fact, in his world, there’s no such thing.

“Coach never sets an alarm, doesn’t need a calendar, never misses a meeting, is 10 minutes early to everything, and out-prepares everybody,” said GM Scott Alvarez. “Our staff has long grown accustomed to his 3 a.m. texts, 5 a.m. phone calls, and 7 a.m. staff meetings. Trust me, regardless what time it is, he expects your A-game.”

SVP Ron DiGrandi echoed Alvarez. “Coach believes details are the difference – that’s where you find a competitive advantage,” DiGrandi said. “He insists on ‘copious notes – on your trusty legal pad.’

“The inside joke with our staff when Coach went through his surgeries is that it gave US a chance to regroup, refresh, and reload.”

His oversight, relationships and direction have been instrumental in helping Coach Miller manage chronic back and knee pain, brought on by decades-old recurring sports injuries. However, in recent years, as Miller’s pain mounted and options declined, Dr. Wehrli made life-changing introductions to his head coach and close friend.

At Desert Orthopedic Center, Miller met two of the region’s most talented surgeons. First up was Dr. Reginald Fayssoux, MD, a fellowship-trained orthopedic spinal surgeon who specializes in the operative and nonoperative care of patients with problems related to their spine.

Next was Dr. Ghassan Boghosian, a fellowship-trained and board certified orthopedic surgeon, specializing in adult primary and revision joint replacement of the hip and knee.

Dr. Faysouxx performed Miller’s second back-fusion surgery days before the Coyotes opened their 2022 training camp. The coach was on the field – albeit in a golf cart – in barely a few weeks. Hobbled by knees that both needed replacements, Miller still led his team to its 10th championship appearances.

Immediately following the season, Miller’s right knee was the first one repaired, and it flipped the script with his loyal staff – the coach relied on DiGrandi and Alvarez to keep CSESA and the Coyotes’ non-profit organization humming at full capacity.

“They did such an unbelievable job that I had to speed up my recovery,” Miller smiled. “Their plan to phase me out was almost complete.”

‘Come Get Him, He’s all Yours’

”By 3 o’clock in the afternoon, man, I’m losing my mind,” Coach Miller said. “Miss Laurie is always there, and she’s a great nurse for sure. But I can’t just sit and stare at the news.”

By 7:15 the next morning, DiGrandi said, ‘Coach was back in the office. I think he used the walker once, and he had a cane, but we never saw him use it. Either way, within days, he’d ditched both.”

Thanks to advancements in technology, Coach Miller described his operation as “robotic assisted surgery.”

Think of the most advanced game of “Operation” ever. A CAT scan was done to get a model of Miller’s anatomy, and then markers were put on his leg, which acted as GPS systems to guide the surgery. If the screen was green, they knew they were in the right spot. If it went red, they were alerted to stop.

“One of my doctors said it’s like a computer game,” Miller said.

The timing for Miller’s surgery couldn’t have been any better. With Coyotes’ staff lending Miss Laurie a helping hand, the Millers’ living room became a makeshift training room, complete with treatment cables, therapeutic machine, zero-gravity recovery chair, stationary exercise machines, and a cold-compression machine that Miller utilizes as much as possible, day and night.

During recovery, Coach Miller has heard from countless coaches, former players and friends.

“It’s amazing how many people have had something like this, and their advice and support is appreciated,” Miller said. “The first time you do something, you never know what the journey will be.”

While the heartfelt support has poured in, Miller gets plenty of good-natured payback from his players and staff – and especially from his bride Laurie Beth.

“On his worst days,” smiled Miss Laurie, “we all get a kick out of telling Coach to hush – and ‘trust the process.’”

ABOUT THE SOCAL COYOTES
The six-time champion SoCal Coyotes are the 2021 California Non-Profit of the Year, and the national standard of American developmental football. The Coyotes’ organization provides elite athletes a professional environment that refines and showcases their skills through trademarked processes similar to the NBA’s G-league and MLB’s minor-league systems.

Additionally, the Coyotes’ 501c3 and award-winning ‘Above The Line™’ leadership programs impact the social, mental and physical growth of more than 50,000 youth annually through remedial curriculum, training camps, clinics and symposia.