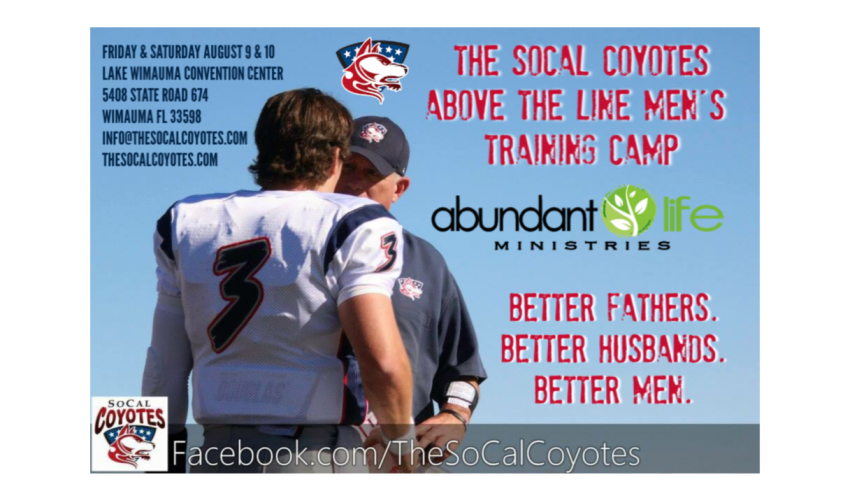 (TAMPA BAY) – Abundant Life Ministries will host the six-time champion SoCal Coyotes for a two-day ‘Above the Line’ Men’s Training Camp on Friday and Saturday August 9-10, as America’s #1 Developmental Pro Football Program™ takes its dynamic leadership ministry outside the state of California for the first time to teach from Colossians what they call “an irrefutable system that rescues, redeems and transforms.” 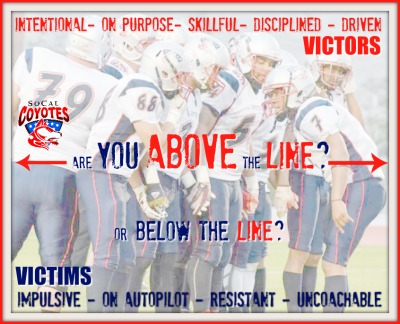 The football-themed conference will be held at the Lake Wimauma Convention Center. Participants will receive workshop ‘playbooks’ for personal study. Sessions will cover topics such as self-discipline, character and culture, clarity of purpose, skillful communication, and the elimination of blaming, complaining and excuses.

“The battle begins in the mind, and requires a daily program of self-discipline and trust as the bedrock of spiritual growth, personal development and lasting relationships.”

The Coyotes live by their motto of ‘faith, family, football,’ says Dr. Robert L. Cummings, an ordained minister, founder of Palm Desert Christian Center, and the Coyotes’ athletic director, who will headline the event with Coach Miller, and a pair of Coyote stars.

Over four sessions and two days, the Coyotes will teach four chapters from the Book of Colossians in what they describe as “a training camp for hungry men” that draws the line between a meaningless life lived for self, or a purposeful life lived for Christ.

“As men, we must strive for a Christ-centered life that is ’Above the Line’ in all we do,” says Cummings. “Old habits sabotage our purpose. It takes learned behavior to shed the past, stand up to the culture, and do the unthinkable – live for Jesus, build trust and deliver hope to our families, our relationships, our homes, our jobs and our communities.”

The Biblical underpinning of the Coyotes’ ‘Above the Line’ ministry is drawn from Paul’s letter to believers in Colossae (the book of Colossians). Much like today’s modern culture, Colossae was under attack from false teachers who denigrated the deity of Jesus. Not only did Paul’s letter make clear that Jesus Christ as Creator and Redeemer is non-negotiable, it also offers clear direction for a disciplined life of power and purpose.

SVP Ron DiGrandi and GM Fred Molo, who coordinate the Coyotes’ ‘Above the Line’ program among area schools, businesses and churches, will join in support roles. VP Digital Media Scott Alvarez will film and broadcast the series.

Annually, the Coyotes impact more than 50,000 youth through their camps, clinics, and symposiums. The Riverside County District Attorney’s Office and Sheriff’s Department rely on the Coyotes for their camps to at-risk youth. The organization has taught its ‘Above the Line’ series in more than 50 schools and scores of other venues, including the U.S. Marines Air Combat Base at 29 Palms.

ABUNDANT LIFE MINISTRIES was founded in 1913 and is under the direction of Lead Pastor Anthony McDaniel and his wife Kendra. ALM’s mission is to lead people into a growing relationship with Jesus Christ, while creating environments where people can connect to Christ and other believers, grow spiritually and serve others. Discover more at www.alm.tv.