Home SoCal Coyote News A View of the Darkside 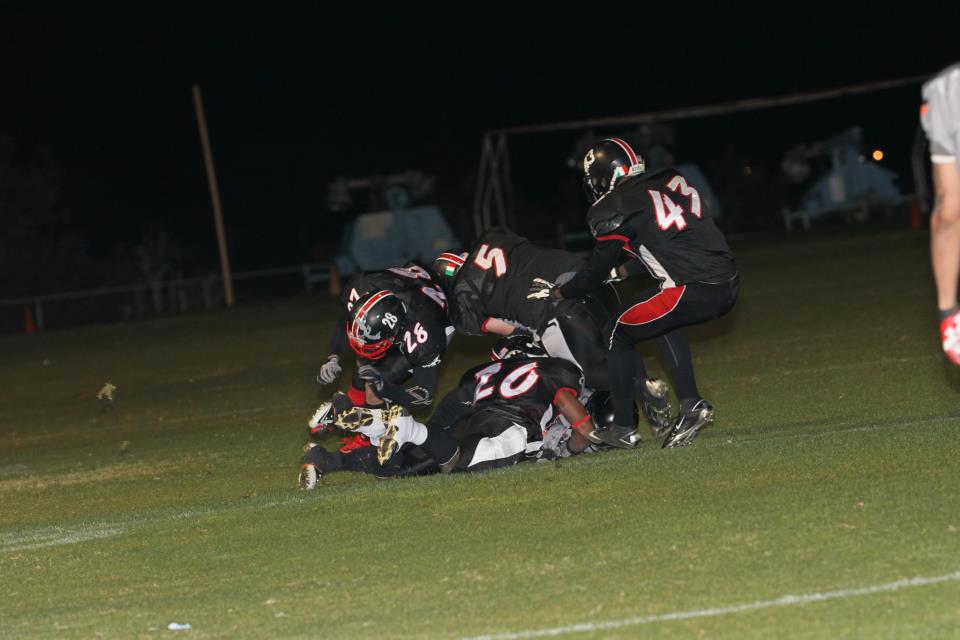 (PALM SPRINGS) — Decades ago, when poet John Greenleaf Whittier penned the words that “you must stick to the fight when you’re hardest hit … it’s when things seem worst that you must not quit,” he must have had a premonition of the SoCal Coyotes 2013 Darkside Defense.

Repeatedly last week, the defense was put in virtually impossible situations, and time after time, they responded. With the Coyote offense suffering intense growing pains, the defense matured as a unit — holding Las Vegas to field goals on three drives and giving up only one easy score in a 34-16 loss to the league-leading Trojans.

Assistant head coach Wayne Anderson Jr. — after reviewing the game — felt the defense actually played its best game overall; under severe field-position stress and enemy fire, the Darkside battled like warriors, in spite of the score or the rotations in personnel.

“We gave up four rushing touchdowns to this team in Vegas, and this time, we succeeded in tackling better, being more physical, and not allowing the Trojans to intimidate us,” Anderson said. “(Nose tackle) Cedric Cox and (rover) Montrell Brown had their best games of the season. Cyle Tisdale, who we call ‘Mr. Everything,’ continues to improve, and has become not only a great leader on the defense, but also the team.”

Anderson loves what he calls the Coyote ‘pups’ — the host of new faces that now make up a vicious, swirling defense, including Jordan Cornell, Alex Mendoza, Bryan ‘Pit Stop’ Garcia, and Steven Abed. “They are really growing with each game, and making greater contributions to the overall success of the defense,” surmised Anderson, who added the coaching staff was very pleased with the continuing growth of Tyler Malone, Jason Franek, Nemo Tamez Jeremy Southerland and Juan Velencia.

But you can’t talk ‘Darkside’ without recognizing whose helmets and numbers appear on almost every play — veteran leaders Michael “Bo” Bovain, Devion Brown, Alfredo Melendez and Deshawn Carr, who “keep our defense together, no matter where they are on the field,” Anderson said.

The coach applauded the defense for its renewed aggressiveness, with more defenders attacking the football and pressuring the quarterback into a forced fumble and Coyote recovery. “The next step in the progression of the defense is to play more on the other side of the line of scrimmage, to make more plays for loss, get more quarterback sacks, create more turnovers and to score on defense,” he said.

“Let’s face it — it’s our job to get the ball back to the offense as fast as possible,” Anderson added. “We need to do whatever it takes to do that. I feel with this game coming up, we are going to have an angry group Coyote defenders that are going to feed on anyone who touches the football. This will create great opportunities for our offense to do what it does best — score touchdowns.”

Should the Coyotes — who can still reach the WWFL title game if they run the table in their next three games — lack for motivation, they need only look at the last line of Whittier’s famous poem:

Life is full of its twists and turns,
As every one of us sometimes learns.
But many a failure turns about
You just might win if stick it out.
You can’t give up when the pace seems slow,
You may just succeed with one more blow.