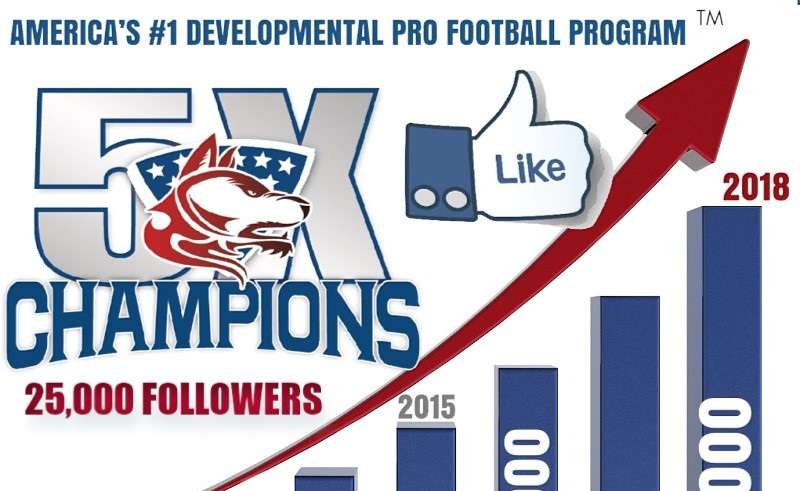 (INDIO) – The SoCal Coyotes – America’s #1 Developmental Pro Football Program™ – soared to 25,000 organic followers and Facebook ‘likes’ this week,  as the non-profit sports leadership organization continued its remarkable climb as one of the nation’s fastest-growing sports brands.

Nationally, the upward-trending Coyotes have far more likes and followers than any developmental pro football franchise in the country. In just six years, the Coyotes now only trail one professional indoor Arena team – and are in respectable company in high-low comparisons of other sports, and facilities.

For instance, the Ontario Fury (pro soccer), who play in nearby Citizens Bank Arena, have 11,604 likes. The Star, the 91-acre campus that hosts the world headquarters of the Dallas Cowboys in Frisco, has 31,643.

The Coyotes anchor the Pacific Coast Conference of Developmental Football International LLC. They will host the league’s first title game at Shadow Hills Stadium on December 1, against the visiting San Diego Bulldogs, with kickoff set for 6 p.m.

Concluding their seventh year and 11th season with a formidable national footprint, the Coyotes are one of the Coachella Valley’s largest originators and producers of sports content. This includes live game coverage and daily sports programming.

The Coyotes are partners with Coachella Sports & Entertainment Stadium Authority (CSESA) and Richmond Honan Development & Acquisitions LLC in the master development of The Shield at 1 Coyote Way. The 125-acre, $300-million sports, medical and entertainment campus will be built on prime real estate currently owned by The Berger Foundation at Cook and I-10 in Palm Desert.

The Coyotes organization has meticulously built dominant national brands now synonymous with ‘Faith, Family & Football,’ and other trademarks such as ‘Building Champions, Building Men™,’ and ‘Defend the Shield™.’